As the magnitude and complexity of natural disasters become more magnified, Japanese civil engineers are stressing the importance of preparing for future calamities from the perspective of "multihazard" risk.

Kazuo Konagai, former president of the nonprofit Engineers Without Borders Japan, told Kyodo News in a recent interview that he is growing more and more concerned intense climate change-fueled natural disasters are increasing the risk of simultaneous hazardous events. 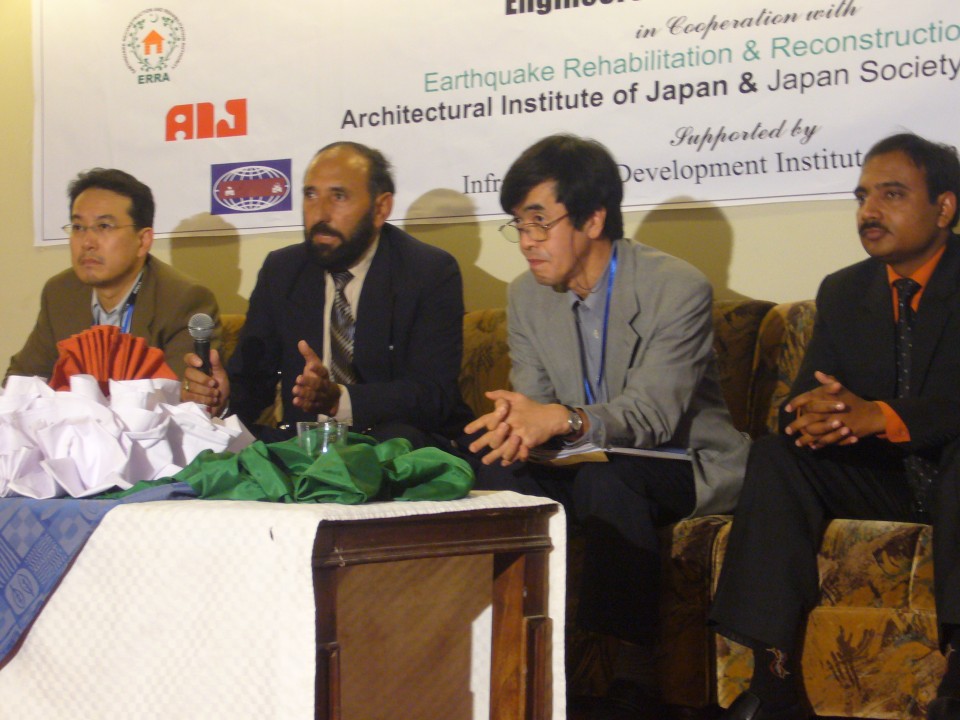 "Speaking of (the influence of) climate change, for example, we face difficulties in disaster risk reductions for (several) major cities due to the combination of rising sea levels and ground subsidence," Konagai, a professor emeritus at the University of Tokyo, said, the latter referring to the sinking of the ground due to natural events such as earthquakes, erosion, and other phenomena.

Konagai, an expert on soil dynamics and seismic waves, tries to involve professionals from various fields in his current research on the mechanics of slope disasters like landslides in which he employs a special platform designed to accurately predict precipitation in mountainous regions over 24 hours.

"Looking at recent heavy rain disasters in Japan, we've noticed downpours are quite extreme," he said. "So we invited meteorologists to forecast weather in our study."

Without increasing efforts toward a multidisciplinary approach, Konagai believes it will become impossible to respond to wide-area disasters of the type observed in recent years and expected more often in future.

The issue is particularly front of mind for the Japanese public as March 11 is the 10th anniversary of the catastrophic earthquake-tsunami event and subsequent nuclear crisis which required a complex, multifaceted response from authorities and allowed some difficult lessons to be learned.

The quake disaster in the past, Konagai and others are looking to prepare for future disasters that will require a comparable response.

Konagai, who conducted research on landslides in Asia, points to melting glaciers as a major multihazard concern, with the risk much exacerbated by global warming.

"Glaciers loosened by warm temperatures" will only be more unstable and prone to catastrophic collapse in the event of powerful earthquakes, he said, pointing at the 2015 earthquake disaster in Nepal as a possible recent example. 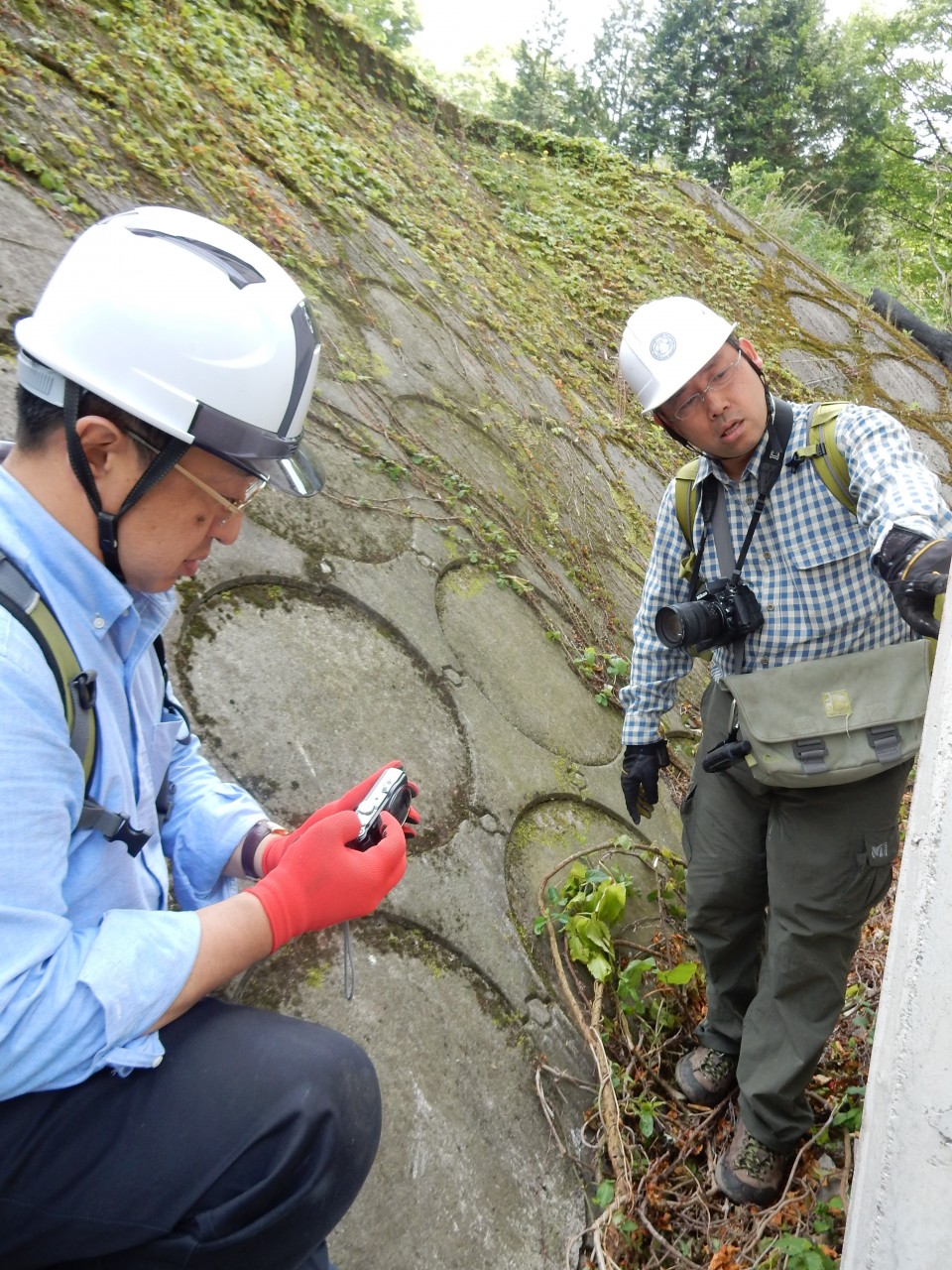 Mitsuyoshi Akiyama (L), president of Engineers Without Borders Japan, probes damage of a bridge in Kumamoto Prefecture after powerful earthquakes struck the area in 2016. (Photo courtesy of Mitsuyoshi Akiyama) (Kyodo)

Echoing Konagai's global warming concerns, Mitsuyoshi Akiyama, the current president of EWBJ and a professor in Waseda University's civil and environmental engineering department, said that climate change considerations must also be at the forefront of disaster reconstruction planning, especially decarbonization and the reduction of greenhouse gases.

He gives the example of efforts being made to counterbalance cement's emissions-intensive production process.

"For example, we can lock CO2 in the air into concrete," Akiyama said while cautioning that such a project would still be challenging since it would require linking together experts from a wide range of fields.

"It is essential that we share information on a global scale and educate each other," said Akiyama, whose expertise lies in concrete engineering.

On top of rendering technical assistance to disaster-hit areas, another important mission of EWBJ, established in 2005 after the Indian Ocean earthquake and tsunami of the previous year, is providing disaster education. 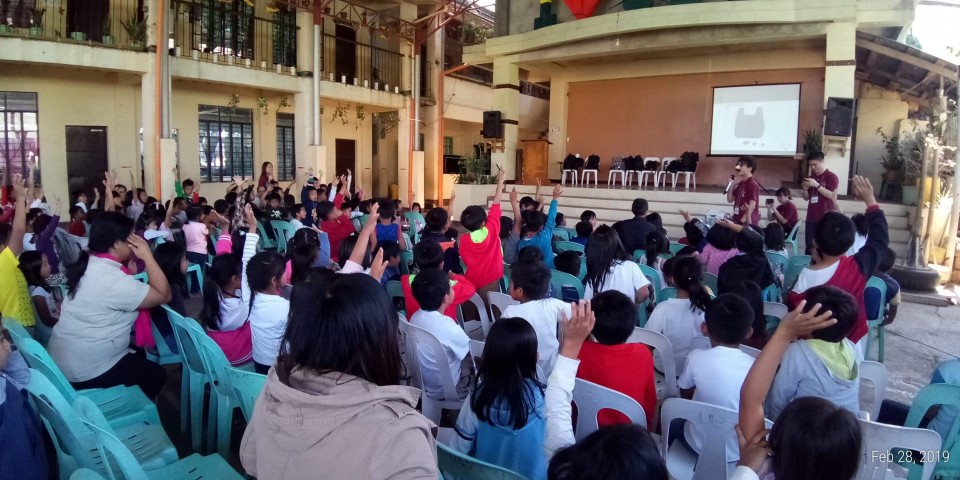 Members of a student group of Waseda University give a lecture on disaster risk reductions at an elementary school in the Philippines in 2019. (Photo courtesy of Satoru Nakamura) (Kyodo)

Toyokazu Sakaki, a director of EWBJ, who spearheaded a project to dispatch senior engineers to two cities in Iwate Prefecture after Japan's 2011 disaster, has been advising the Waseda student group comprising students studying civil engineering. 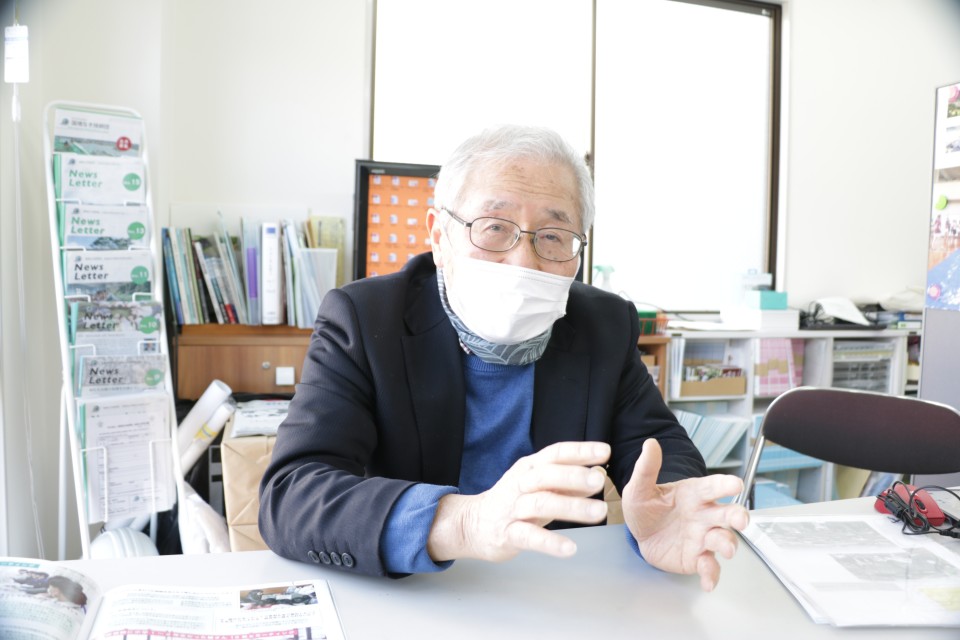 Toyokazu Sakaki, director of Engineers Without Borders Japan, gives an interview in Tokyo on Feb. 19, 2021.(Kyodo)

Taking from his experience of conducting projects in the Philippines and other countries during his tenure at Kawasaki Steel Corp. (now JFE Holdings Inc.), he has assisted the student group in providing disaster risk reduction education in the Philippines.

Satoru Nakamura, 21, former vice president of the Waseda group, participated in activities held in the Philippines in 2019, where he spoke with children at elementary schools about prevention measures in Baguio on the island of Luzon, northern Philippines, and other locations of the country.

"I think we were able to convey our message about the importance of awareness of disaster risk reduction, and that preparations for potential disasters start with the individual, rather than someone else or the government," said Nakamura, who is aiming to become a hydraulic engineer after recently leaving the student group.

However, their main activities in Japan and abroad have been halted since last year due to the coronavirus pandemic.

"We would like to resume student activities soon, once the coronavirus situation is settled, as we believe their activities are also important from the standpoint of international exchanges," Sakaki said.

In addition to disaster reduction education, Akiyama and Konagai said there should be more emphasis placed on research related to infrastructure that can be quickly built when existing structures are damaged or destroyed in disasters, efforts to develop structures that will withstand disasters should also continue.

Makeshift bridges, for example, could be built when actual bridges are lost to flooding or damage in a major disaster, allowing people to evacuate or for response teams to bring in relief supplies.

"By using some equipment with a concept similar to Lego blocks, you can build a makeshift structure, which can transport emergency vehicles and prevent isolation of villages and people," Akiyama said.

"Disaster-prone countries like Japan can heighten resiliency by stockpiling such equipment together with makeshift housing kits," Akiyama said.

"Officials of local governments, public organizations, and construction companies have gained know-how by going through natural disasters. I would like to build a system to absorb such know-how and educate people who have not faced major disasters," Akiyama said.

The idea includes sharing experience gained through the March 11 disaster with people in areas where other megaquakes could strike in the future, Akiyama said.