One month after a military coup that ousted the elected government of de facto leader Aung San Suu Kyi, Myanmar has seen no abatement of popular protests as Sunday marked its deadliest day since the power grab.

Violent responses by Myanmar's security forces, who have killed at least 21 protesters since the coup, 18 of them on Sunday alone, have drawn condemnation from the international community, with the United States and the European Union leading calls for greater sanctions against the military.

Despite warnings from the military, people in Myanmar have turned out for massive demonstrations across the country every day for more than three weeks, and government workers have also staged walkouts, paralyzing government offices and the economy.

The intensity of the protests and civil disobedience movement unleashed by the coup seems to have taken the military by surprise, casting doubt on its ability to govern amid widespread protests. 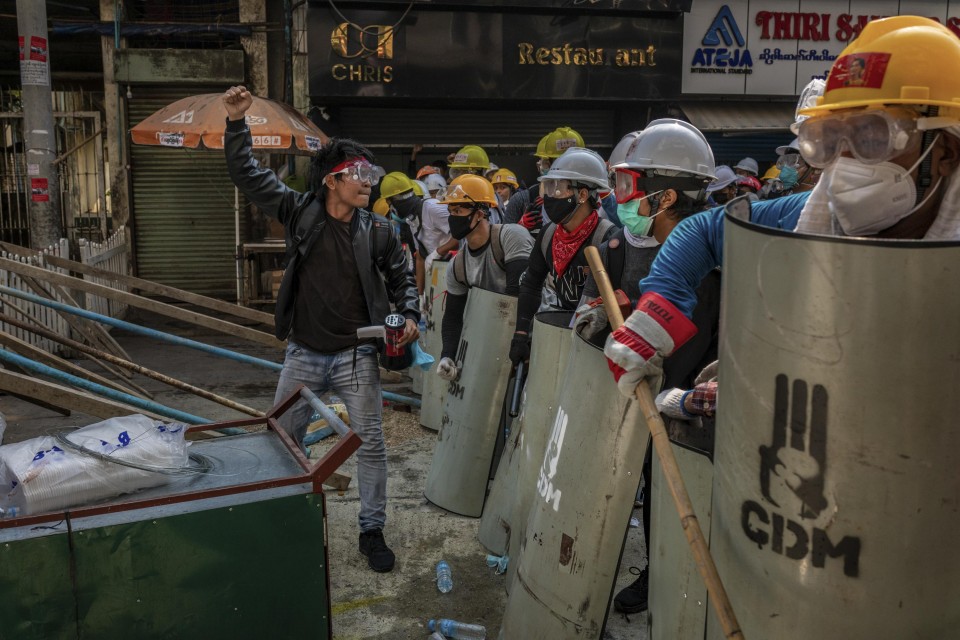 Protesters defend themselves with makeshift shields during clashes with riot police on Feb. 28, 2021 in Yangon, Myanmar. (Getty/Kyodo)

While the military appears intent on holding onto power by keeping Suu Kyi and other prominent figures in detention, some observers say that if the military finds itself unable to govern effectively it could attempt a different tack.

The coup followed a landslide victory by Suu Kyi's ruling National League for Democracy party in the November general election, the results of which the military has disputed as fraudulent.

It was staged just hours before newly elected members were supposed to sit in parliament for the first time since the election.

The military has nullified the election results and promises to hold a "free and fair multiparty" general election, with power transferred to the winning party.

Pledging to establish a "true and disciplined democracy," the military has repeated that its toppling of the civilian government was constitutional and did not amount to a coup.

Having been denied their chance to sit in parliament, newly elected NLD members, meanwhile, have established a committee they say represents the country's legitimate legislature. 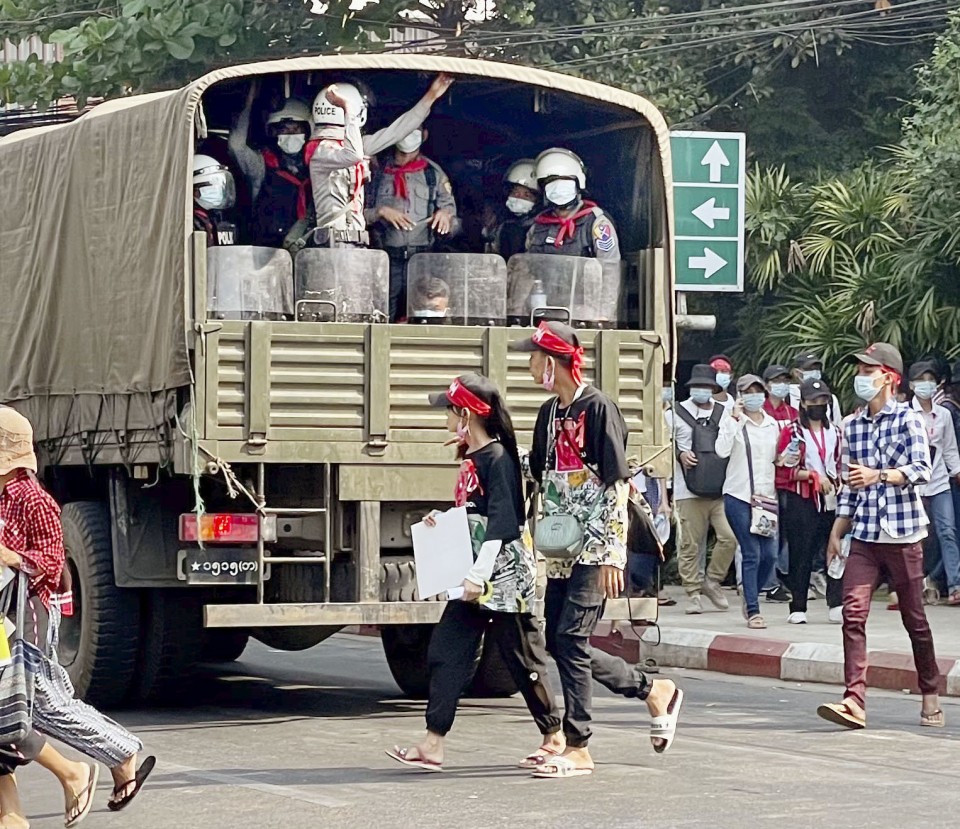 Security forces are pictured inside a truck in Yangon, Myanmar, on Feb. 22, 2021, as people take to the streets to protest against the Feb. 1 military coup. (Kyodo) ==Kyodo

The Committee Representing Pyidaungsu Hluttaw, as it is called, has already selected a special envoy to the United Nations. Its members' message to the international community is that they are the democratically elected lawmakers.

The military-led government has bristled at the move and decided to take legal action, saying the committee violates the Constitution, and relevant laws and regulations.

Suu Kyi remains detained over allegations that she illegally imported and used communications equipment. She also faces other charges, including violating the natural disaster management law, according to her lawyer. She faces years in prison if convicted.

Large daily demonstrations that erupted on Feb. 6 have continued and drawn millions of people on some days.

"The scale of the citizens' protest movements and the speed at which they have expanded were greater than expected," said Yoshihiro Nakanishi, an associate professor at Kyoto University who specializes in Myanmar politics.

The movements have seen diverse groups join voluntarily, such as young people, government workers and members of the LGBT community, he said. They are also deftly using social media, emulating people who staged demonstrations in neighboring Thailand and Hong Kong, he added. 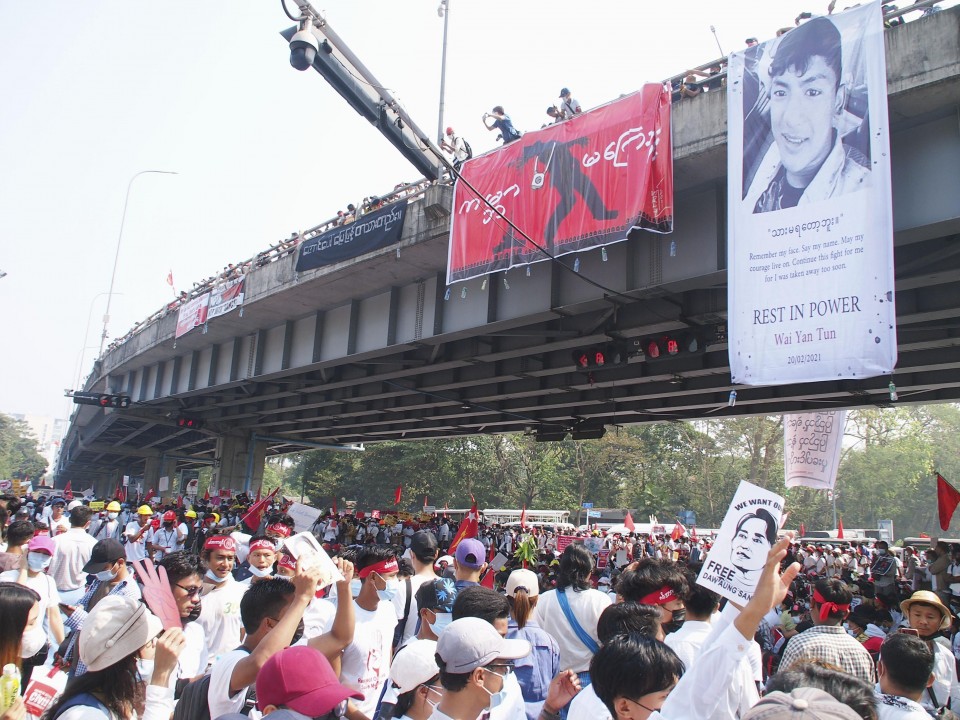 With the military showing signs that it is increasingly willing to use force against protests, Nakanishi predicted that sporadic clashes would continue to occur, and that violence could spread across the country if triggered by an accident.

And even though the military appears in no mood to back down, "there is a possibility that it may attempt a policy change in some fashion if the act of governance is stalemated," he said.

Sunday's deadly use of force against protesters occurred as live ammunition was reportedly fired into crowds in half a dozen cities across the country including the largest city Yangon, according to the Office of the U.N. High Commissioner for Human Rights. Over 30 people were wounded, the U.N. office said.

The U.S. government condemned the violence, with National Security Adviser Jake Sullivan saying in a statement that Washington is preparing additional actions to "impose further costs on those responsible for this latest outbreak of violence and the recent coup."

On Monday, Japanese Chief Cabinet Secretary Katsunobu Kato said, "The use of force against peaceful protesters is unacceptable, and we strongly urge Myanmar security forces to immediately stop the violence against civilians."

While acknowledging there are "limits" to actions that can be taken by the international community, Nakanishi called for tenacious efforts by Japan which he says has "its own connections to the top Myanmar military brass."

Tokyo should "continue persistently making contact with them, including unofficially, so it can give them objective information and proposals toward guiding Myanmar back on the path to democracy," he said.