A "Sake Dialogue" featuring long-established Japanese breweries and those emerging in the United States recently brought about discussions on cross-border information-sharing, cooperation and innovation to spread the word of Japan's most famous alcoholic export.

The nearly 90-minute talk, whose participants included three sake brewers on each side of the Pacific, was organized by the Sake Brewers Association of North America in Washington, and the Embassy of Japan in the United States, in late February. 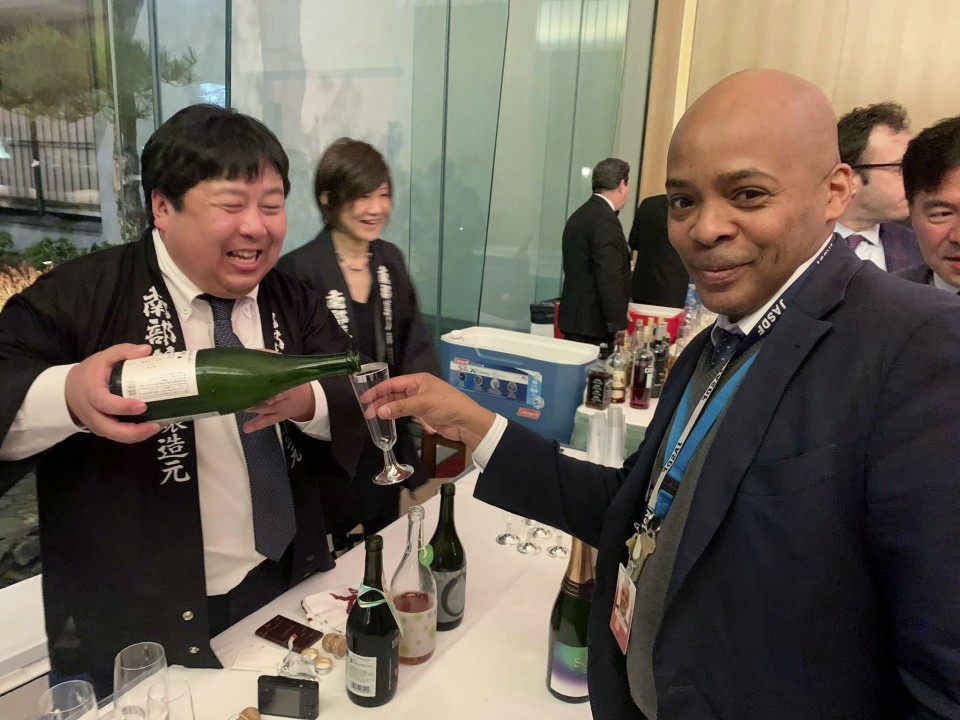 Kosuke Kuji (L), president of Nambu Bijen in Ninohe, Iwate Prefecture, serves a guest a glass of sake at a meeting held in Washington in February 2020. (Photo courtesy of Kosuke Kuji)(Kyodo)

On the Japanese side, the Miyagi, Fukushima and Nagano prefecture breweries -- all in existence for hundreds of years -- participated in the webinar conducted in English, while brewers from New York, Tennessee, and California, spoke passionately about the challenges involved in the sake-brewing process and the ingenuity required for further product development.

The panel also discussed the obvious challenges ahead after the U.S. market -- for many years the largest overseas export destination for Japanese sake -- was severely damaged by the coronavirus outbreak.

Weston Konishi, 50, president of the sake brewers association, told Kyodo News he expects "Japanese sake to become more popular in the U.S." and explained that the conference was part of a series, which also aims to educate Japanese brewers on regulations in the North American market, and the prospects for growth in the industry.

In 2020, due to shrinking demand for food services and leisure during the pandemic, the value of sake exports from Japan dropped by 25 percent from the previous year to 5 billion yen ($45 million), falling for the first time below exports to Hong Kong and China, economies that rebounded relatively quickly from the virus-induced downturn.

Before that, the United States had been the largest importer of Japanese sake since 1988.

The future of Japanese sake exports hinges largely on the resurgence of the U.S. market where consumers are very open to trying new things, said Euka Isawa, 27, the person in charge of overseas business development for the centuries-old, family-owned Katsuyama Supreme Sake Co. in Miyagi Prefecture, northeastern Japan.

"Compared to European or Asian countries, I feel that American consumers are more receptive to different cultures," Isawa said during the conference. "In Europe, some countries are really conservative, so even if you introduce sake that people can enjoy with meals, they still believe wine is king." 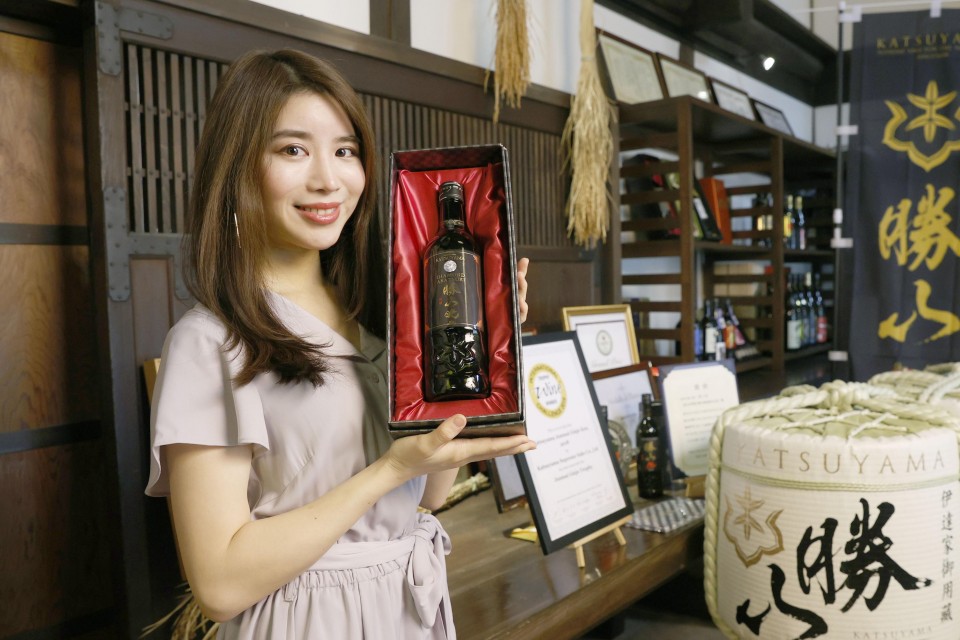 Euka Isawa, in charge of overseas business development for the family-owned Katsuyama Supreme Sake Co., displays a bottle of the company's sake, in this photo taken on March 5, 2021, in Sendai, Miyagi Prefecture. (Kyodo)

While studying abroad seven years ago, Isawa started visiting restaurants in New York for sales meetings and realized, "Since U.S. restaurants have a good understanding of sake, if they feel it is good quality, a small brewery can become a (well-established) brand." Because of her unwavering commitment, Katsuyama sakes have built a solid overseas following.

Isawa said the brewery was severely damaged by the massive 2011 earthquake and tsunami that hit northeastern Japan. A high school student at the time, she recalled the words of her principal, who instructed his students "to grow into capable people who can contribute to the local community."

Taking those words to heart, Isawa set out on a mission to promote the family's sake around the world.

Kosuke Kuji, the 48-year-old president of Nambu Bijin and a sake export pioneer for the brewery in Ninohe, Iwate Prefecture, said the surge in the number of local U.S. sake producers is indicative of the industry's youth movement.

Craft beer in the United States has been booming, and microbreweries have sprung up around the country since the 2010s. Riding this momentum, sake breweries have also emerged both in big cities and rural areas in recent years.

"Young and passionate American brewers continue to evolve," Kuji said, adding that he would not be surprised if the day comes when an American sake producer wins the world's top award, supplanting a Japanese brand due to the quickly-evolving U.S. sake market.

Brooklyn Kura co-founder Brian Polen, 39, who opened his brewery with a counter bar in Brooklyn, New York, in 2018, was one of the three U.S. representatives participating in the event.

For Polen, a former financial analyst, the attention Japanese breweries pay to craftsmanship and quality made him question why the drink was not more alluring to producers in the United States.

"It's very simple...It really is an exceptional beverage. It's one that we believe isn't as well represented around the world as it could and should be," he said in the webinar, adding, "It's a question that requires a lot of time, energy and investment" to overcome a multitude of complexities to create the different sake variants.

But the point is to keep it simple and accessible for consumers. "It is substitutable for your fine wine or craft beer, and you don't need special glassware, ceremony, or Japanese food to enjoy it," he said.

As for what the future holds for cooperation in challenges and innovations to improve the sake brewing process across the Pacific, the six agreed that further "sake dialogue" conferences would go a long way toward achieving that goal.

"Almost 80 percent of our distribution was to restaurants. In New York City, effectively all of the restaurants were shut down (during the pandemic), so it's been challenging. But I think that our work is much longer term," said Polen.

"There's a light at the end of the tunnel, and if we can continue to work together like this, everybody is going to come out a winner -- as long as you have cash on your balance sheet."