Around 70 percent of Japanese companies keen on pursuing overseas operations are rethinking or have reviewed their business strategy amid global risks such as the coronavirus pandemic, a recently released survey showed.

With the spread of COVID-19 battering the world economy since last year, 64.8 percent of firms with business dealings abroad said they have been negatively impacted in terms of overseas sales for fiscal 2020 ending this month, according to Japan External Trade Organization. 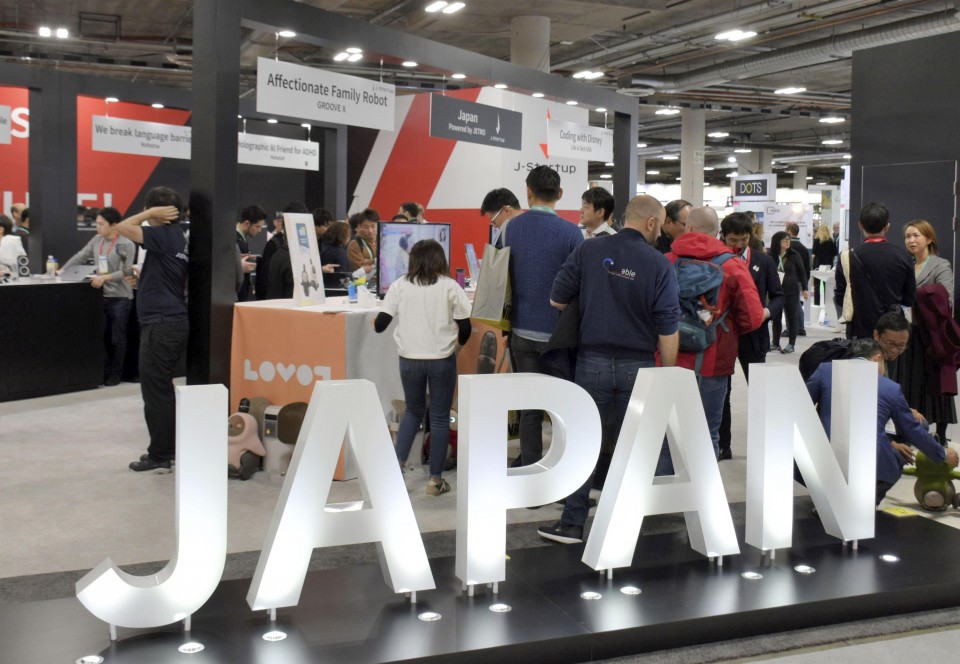 Photo taken in January 2020 shows a display space put up by the Japan External Trade Organization at the Consumer Electronics Show in Las Vegas. (Kyodo)

COVID-19, which resulted in lockdowns and battered the world economy since last year, has thrust companies in Japan into restructuring their business plans and organization to weather the fallout from the virus.

Among other global risks, U.S.-China trade tensions as well as export restrictions by the United States and China have also stirred worries among the companies.

The survey found that 36.4 percent are concerned in the next two to three years over Beijing's strengthened export regulations, while 32.6 percent expressed the same for U.S. export control restrictions.

In multiple answers, 42.5 percent of respondents, including those in the food and clothing, apparel and electrical machinery sectors, cited a review of their sales strategy.

As a specific measure on how to revise such strategy, 60.9 percent cited a review of their overseas customers.

Others are taking the digital route due to increased demand on digital technology amid the pandemic, with 38.5 percent looking to utilization of virtual exhibits and business meetings and 30 percent with eyes on cross-border e-commerce.

The survey also found that the margin of decline for overseas sales -- especially in the apparel and retail sectors -- in fiscal 2020 dropped by 38.4 percent on average, more than 10 points higher from that of domestic sales.

Although the proportion of firms looking at expanding their existing overseas operations for the next three years has hit a record low, the JETRO survey said the proportion for those still wanting to start an overseas foray in the future has only marginally decreased, underscoring how "eagerness to advance overseas has not waned."

Around 13,500 Japanese firms ranging from manufacturers to trading houses and in the communications sector were surveyed between the end of October to early December, with a total of 2,722 giving valid responses.