Anti-coup demonstrations continued in Myanmar on Monday with the death toll from the ruling military's violent campaign to quell the unrest reaching 510, according to a rights group monitoring the situation.

In an area controlled by an ethnic minority group in the eastern state of Kayin, about 3,000 people fled for neighboring Thailand on Sunday following airstrikes by the military, according to local media. 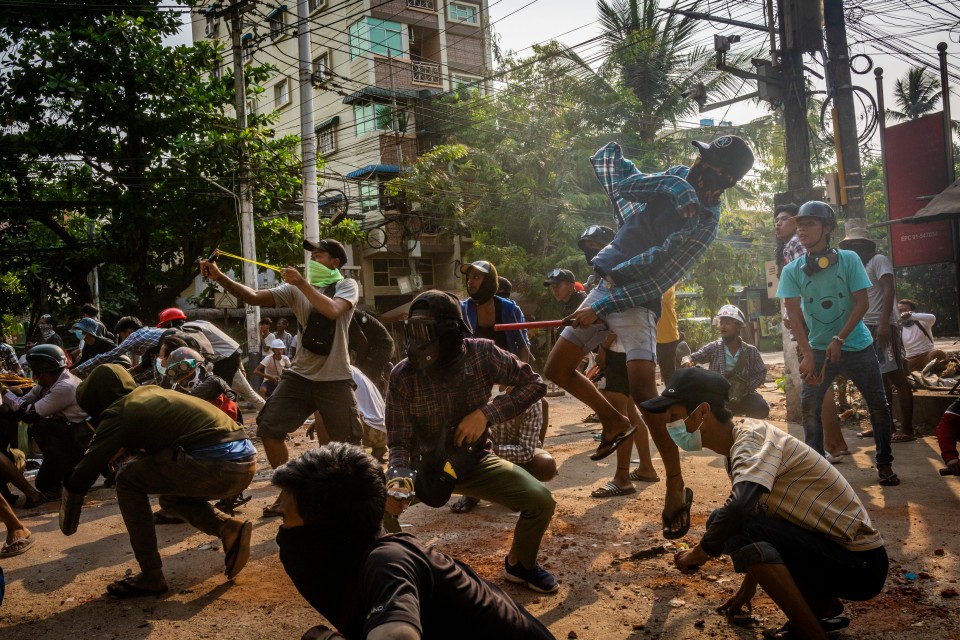 Anti-coup protesters are pictured on March 28, 2021 in Yangon, Myanmar. (Getty/Kyodo)

The Assistance Association for Political Prisoners said Monday night that the overall death toll had risen to 510, including 14 on that day alone.

On Monday, people took to the streets in Kachin State and Sagaing Region in the country's north, as well as in Dawei in the south, with many making a three-finger salute, the media said. The gesture has come to symbolize protesters' resistance to dictatorship.

On Sunday, about 3,000 residents left Kayin State for Thailand after people were killed or injured in airstrikes on Karen National Union positions, according to the media.

The armed ethnic group has clashed with the country's military before and its members are said to have joined forces with anti-coup protesters.

On Monday, 1,871 Myanmar people fled to Thailand following the airstrike, according to the Salawin National Park in Mae Hong Son Province in northern Thailand. The province borders Kayin State to the west.

The park officials provided the refugees initial assistance before sending them to responsible organizations in Thailand, according to the national park.

Prayut also said the government has prepared temporary shelters for the refugees and will closely monitor the situation in Myanmar.

On Saturday, at least 114 people were reportedly killed by security forces in Myanmar, according to local media outlet Myanmar Now, in the bloodiest violence since the military seized power in a coup in February. Saturday was Armed Forces Day, considered the most important event for the military to showcase its prowess.

The Feb. 1 coup has set off a wave of protests across the country that security forces have sought to quell using deadly force. Since taking control, the military has kept elected leader Aung San Suu Kyi and other prominent politicians in detention.