Tears, prayers and a resolve to pass on lessons learned swept Japan on Thursday as the country marked 10 years since a massive earthquake and tsunami devastated its northeastern coast, with services held in the hardest-hit areas and Tokyo to mourn the more than 22,000 lives lost and unaccounted for.

People across the nation observed a moment of silence at 2:46 p.m., exactly a decade after the huge quake shook eastern and northeastern Japan, particularly Fukushima, Iwate and Miyagi prefectures, triggering a tsunami and the world's worst nuclear disaster since the 1986 Chernobyl crisis.
<READ CHRONOLOGY HERE> 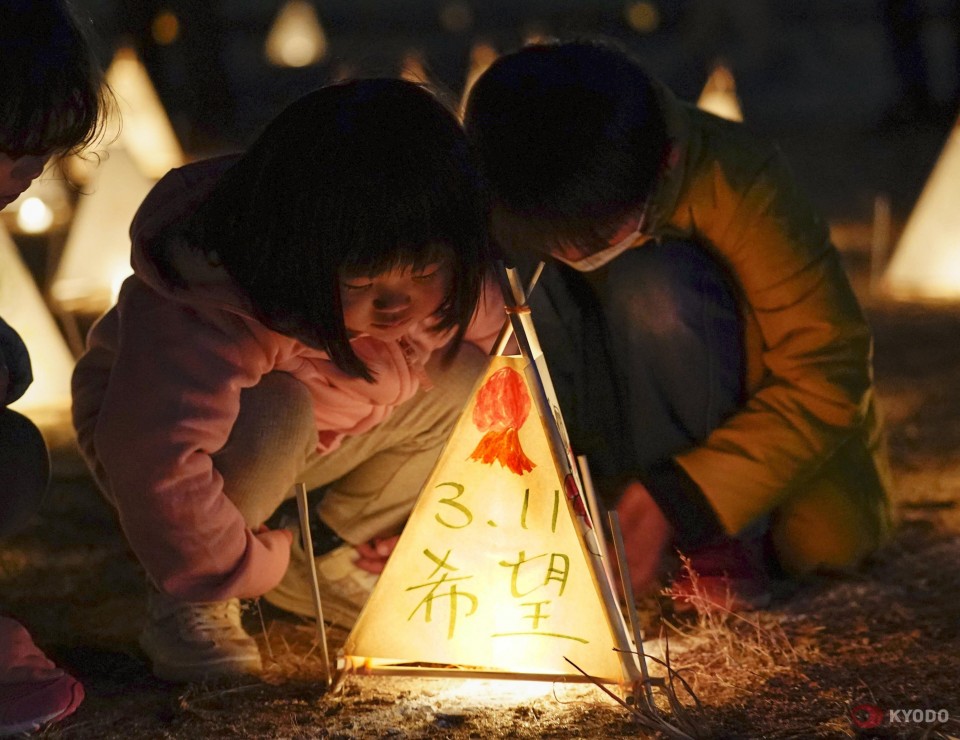 Children watch lanterns during a memorial event in Tomioka, Fukushima Prefecture, on March 11, 2021, the 10th anniversary of the earthquake-tsunami disaster that devastated the northeastern Japan town. (Kyodo) ==Kyodo

Ten years on, the multiple disaster has forced energy-poor Japan to re-examine the role of nuclear power and disaster prevention measures. While key infrastructure such as roads, train lines and housing have been rebuilt, around 41,000 people -- down from a peak of 470,000 -- have yet to return to their hometowns since the quake and concerns linger over the disposal of treated radioactive water at the Fukushima Daiichi nuclear plant.

The magnitude-9.0 quake and ensuing tsunami left 15,900 people dead and 2,525 missing, according to the latest figures from the National Police Agency and local police in the disaster-hit areas. Those who died later from issues related to the disaster such as illness and stress-induced suicide totaled 3,775.

The decommissioning of the crippled Fukushima plant is becoming increasingly challenging, with doubts remaining over whether its operator can meet its time frame of between 2041 and 2051 in the face of numerous technical issues. Hundreds of tons of melted fuel debris need to be extracted, and there is also the need to tackle disposing water contaminated with low-toxicity radioactive tritium. 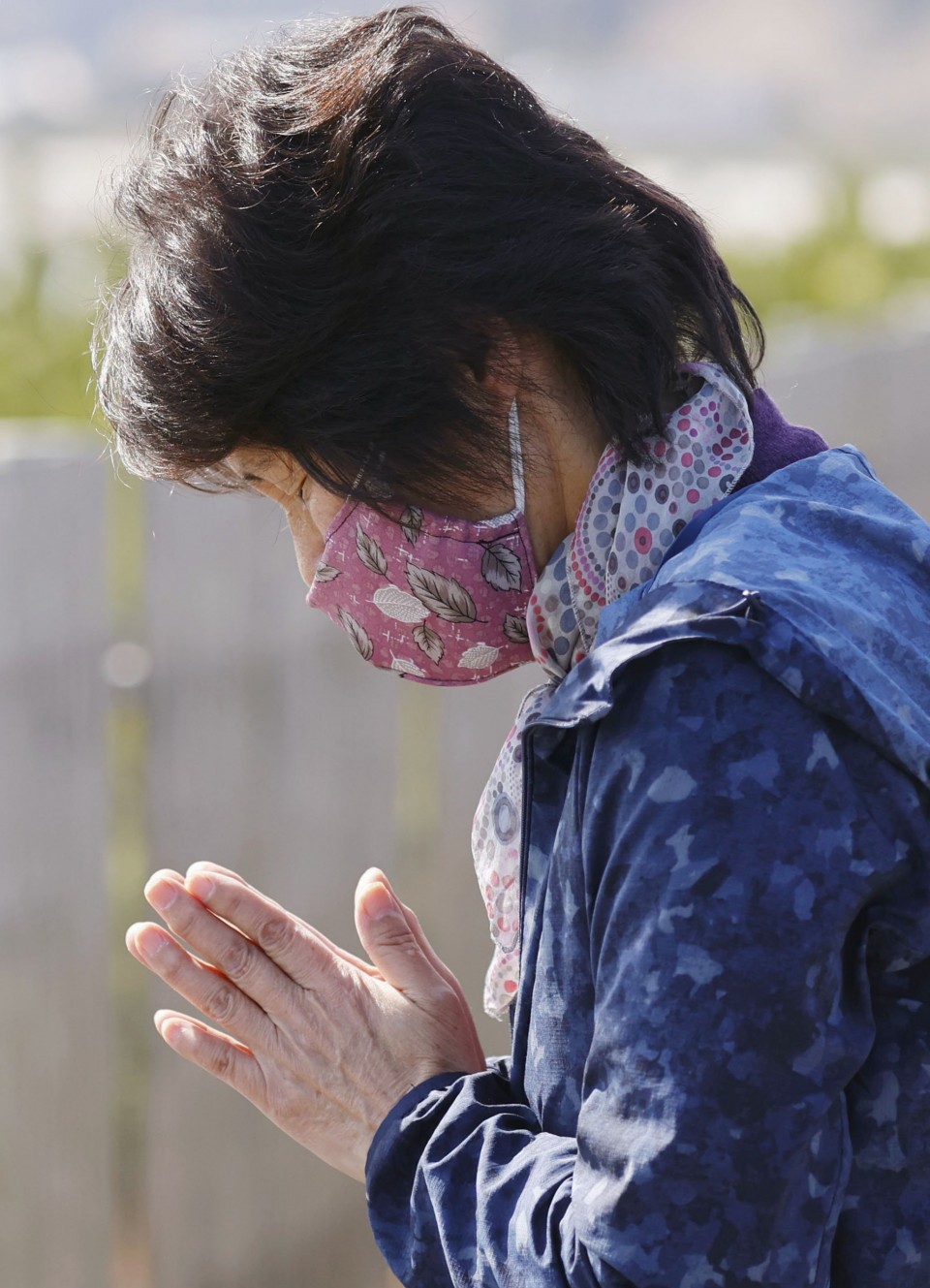 A woman prays in the tsunami-devastated northeastern Japan city of Iwaki in Fukushima Prefecture on March 11, 2021, the 10th anniversary of the Great East Japan Earthquake. (Kyodo) ==Kyodo

In Miyagi's Ishinomaki, where over 3,000 died in the disaster -- more than in any other municipality -- a memorial service was held in the afternoon at Maruhon Makiato Terrace ahead of its official opening in April. The cultural complex, which was completed this year, has become a symbol of reconstruction for the city.

"A lot of precious lives were lost that day, and that can never be forgotten," said Rie Sato, who represented the bereaved families at the ceremony.

"But I have also learned of the warmth of people," said Sato, 44, who lost her younger sister Ikumi in the tsunami.

Bereaved family members and friends visited graves and the coast to lay flowers and pray. Other locals took a moment from their daily schedules to remember loved ones at a cenotaph in Ishinomaki Minamihama Tsunami Recovery Memorial Park, unveiled the same day. 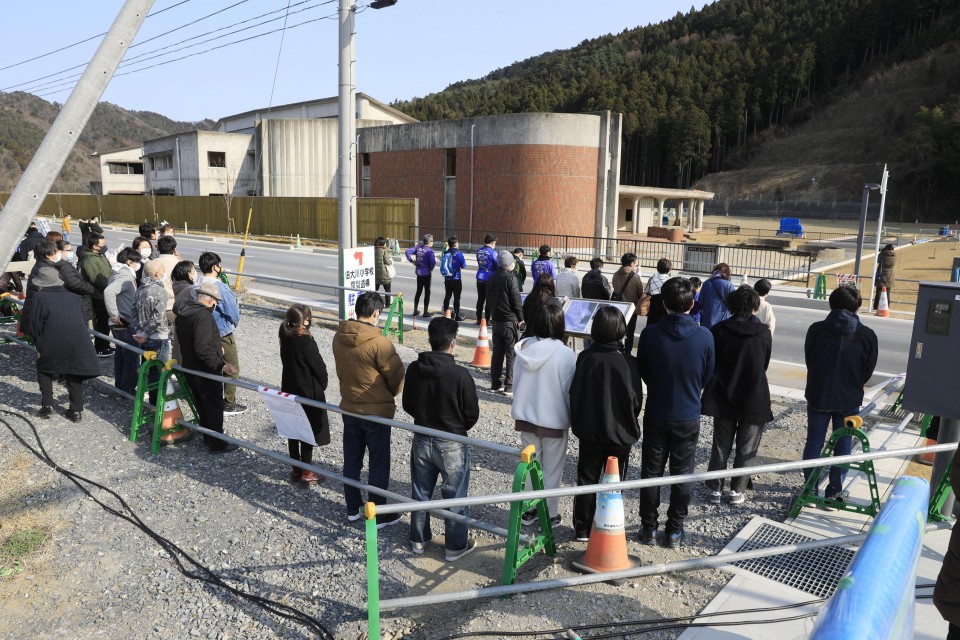 People pray at Okawa Elementary School in Ishinomaki in Miyagi Prefecture, at 2:46 p.m. on March 11, 2021, the time a massive earthquake struck northeastern Japan exactly 10 years ago, triggering a killer tsunami. Seventy-four students and 10 teachers of the school were killed in the disaster. (Kyodo) ==Kyodo

"Even though 10 years have passed, the wounds in the heart remain," an 81-year-old man reflected as he rubbed his grandson's nameplate on the monument.

In the chilly evening wind, hundreds of candles arranged around a "Gambaro! Ishinomaki" sign were lit in a memorial display. Many of the candles were wrapped in colored paper decorated with messages and drawings, while others were used to form the words "3.11 memorial" and the message "10 years, a prayer from the heart" in Japanese.

On Thursday, local police conducted one of their regular searches of coastal areas in Fukushima and Iwate for any sign of remains of those swept away by the tsunami.

At a downsized ceremony at the National Theatre in the Japanese capital, Prime Minister Yoshihide Suga said, "The task of reconstruction is now entering its final phases in these (disaster-hit) regions," with homes reconstructed and towns revived to a great extent. 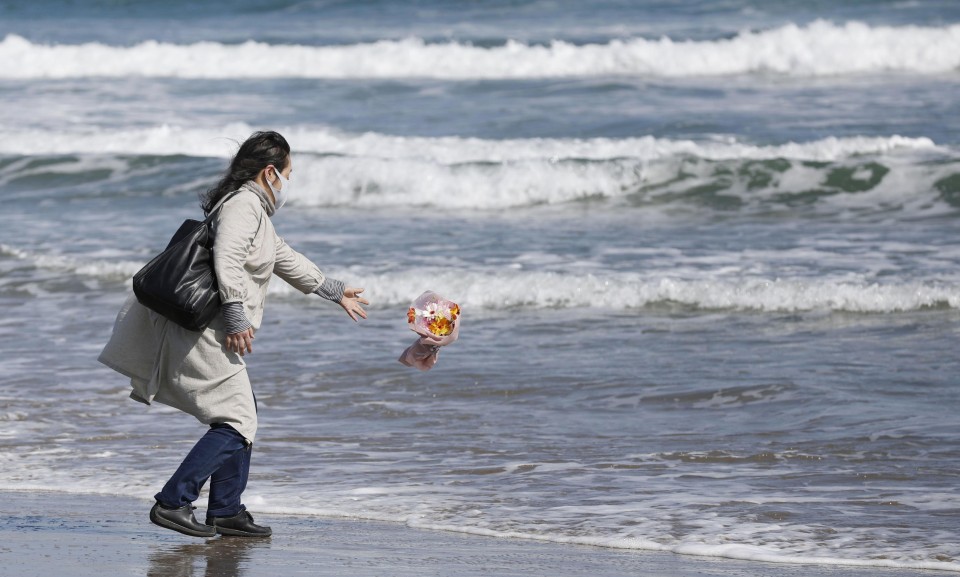 A woman throws flowers into sea in the tsunami-devastated northeastern Japan city of Minamisoma in Fukushima Prefecture on March 11, 2021, the 10th anniversary of the Great East Japan Earthquake. (Kyodo) ==Kyodo

More than 30 trillion yen ($277 billion) has been spent on reconstruction projects over the past decade, but in the next five years, the figure will be cut to around 1.6 trillion yen, most of which will be allocated for Fukushima Prefecture, where reconstruction is lagging due to the Fukushima nuclear disaster.

The government last year approved a bill to extend the life of the Reconstruction Agency, established to oversee rebuilding efforts, until 2031, a decade longer than initially planned.

Suga pledged that the government would provide "continuous and seamless support" to ensure that evacuees and other victims' lives return to normal as soon as possible, and to push the country to be disaster-resilient. 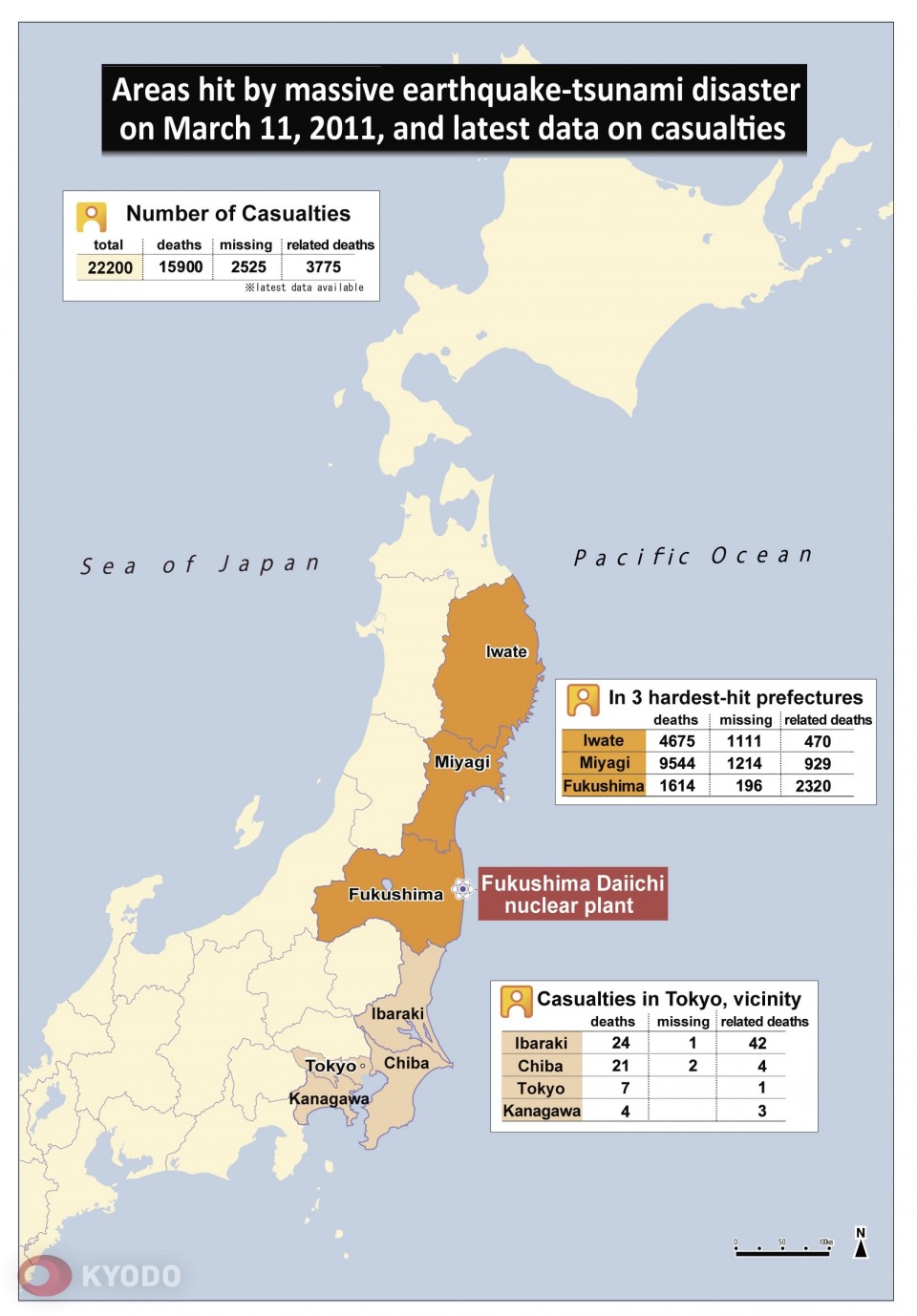 Appearing at the Tokyo ceremony on behalf of bereaved residents of Fukushima, Makoto Saito, 50, said that while he acknowledges reconstruction has progressed considerably, the "recovery of the hearts of the bereaved families has not progressed the way they would want due to overwhelming sadness."

Saito, who works at an elementary school, said he does not want his 5-year-old son Shota's death to have been in vain and vowed to ensure the memory of the disaster will not fade.

"I want to tell children what I experienced and teach them the preciousness of life," he said.

The ceremony in Tokyo, which is currently under an extended state of emergency, was canceled last year due to the outbreak of the novel coronavirus. The government has said the event will be the last in its current incarnation, with future memorial events depending on the situation at the time. 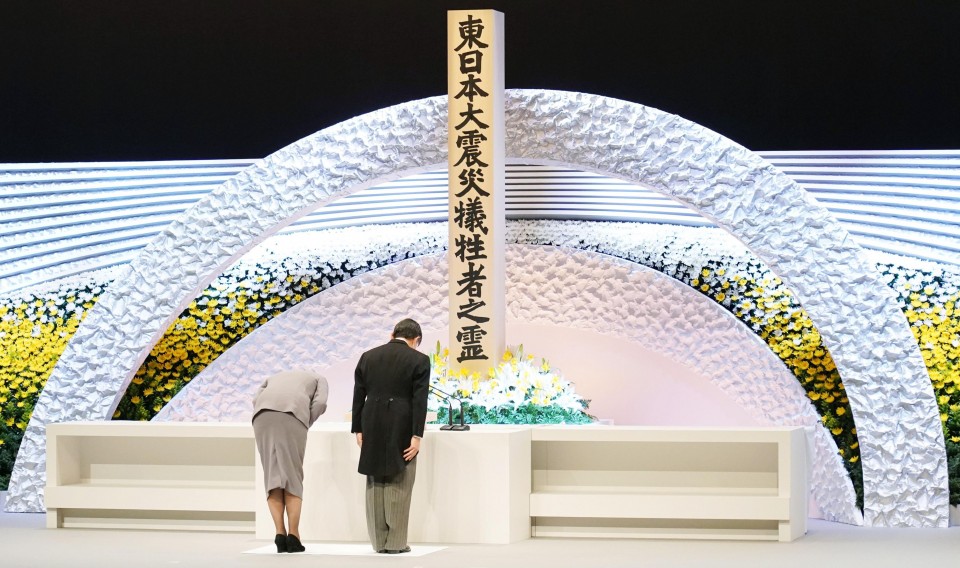 Emperor Naruhito, who attended the ceremony with his wife Empress Masako and has visited the disaster-hit areas, said in his address that his heart aches for the victims.

He urged everyone to unite and stand by those who have suffered to "help all of them regain their peaceful daily lives in less than no time without leaving even a single soul behind in this difficult situation."

Evacuation orders, issued after tsunami waves hit the Fukushima Daiichi nuclear plant causing the release of massive amounts of radioactive material, have already been lifted in many parts of the prefecture as decontamination work has progressed.

The no-go zone is now approximately 337 square kilometers, just 30 percent of the area it once covered but equivalent to more than half the area covered by central Tokyo's 23 wards. 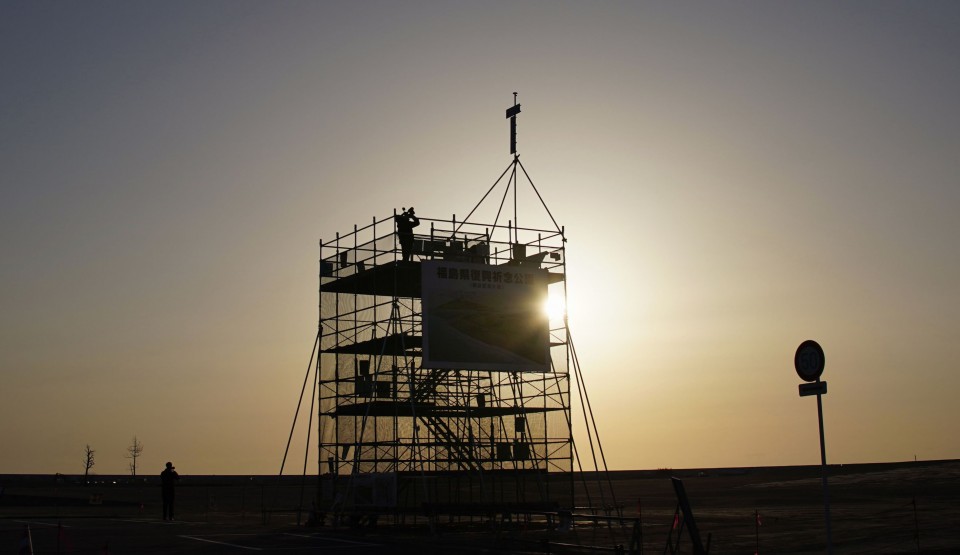 A lookout platform now under construction is pictured at a memorial park in the tsunami-devastated northeastern Japan town of Namie in Fukushima Prefecture on March 11, 2021, the 10th anniversary of the Great East Japan Earthquake. (Kyodo) ==Kyodo

A decades-long process to scrap the crippled plant continues, with operator Tokyo Electric Power Company Holdings Inc. saying earlier this month it had completed the removal of all nuclear fuel rods from the storage pool of the No. 3 reactor building at the complex.

The No. 3 unit was one of the three reactors that suffered core meltdowns following the earthquake and tsunami. Japan decided in December 2019 to delay the excruciatingly slow and dangerous process of removing spent fuel from the storage pools of the other two reactors by as much as five years to March 2029. 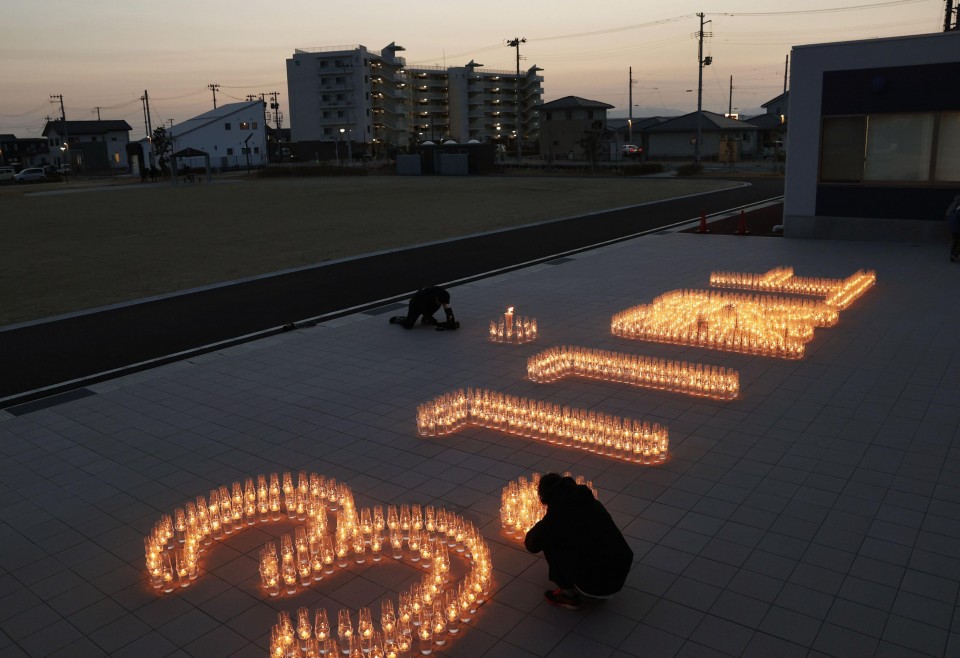 Candles are lit at a memorial event in Natori, Miyagi Prefecture, on March 11, 2021, the 10th anniversary of the Great East Japan Earthquake. (Kyodo) ==Kyodo

In Tokyo, Tomoaki Kobayakawa, president of TEPCO, addressed employees at its headquarters, saying, "We should exercise our responsibility for Fukushima without drawing a line on the 10th anniversary and letting (memories of) the accident fade."

Suga has indicated the government will soon decide how to dispose of treated radioactive water stored in tanks at the crippled power plant, especially with capacity expected to run out by the fall of 2022.

The decommissioning of the crippled facility remains uncertain, with doubts remaining over whether TEPCO will be able to meet its time frame in the face of numerous technical challenges.