Prime Minister Yoshihide Suga's press official resigned Monday, a week after drawing fire for being treated to a lavish dinner while at the communications ministry by a broadcasting firm that employs the premier's eldest son. 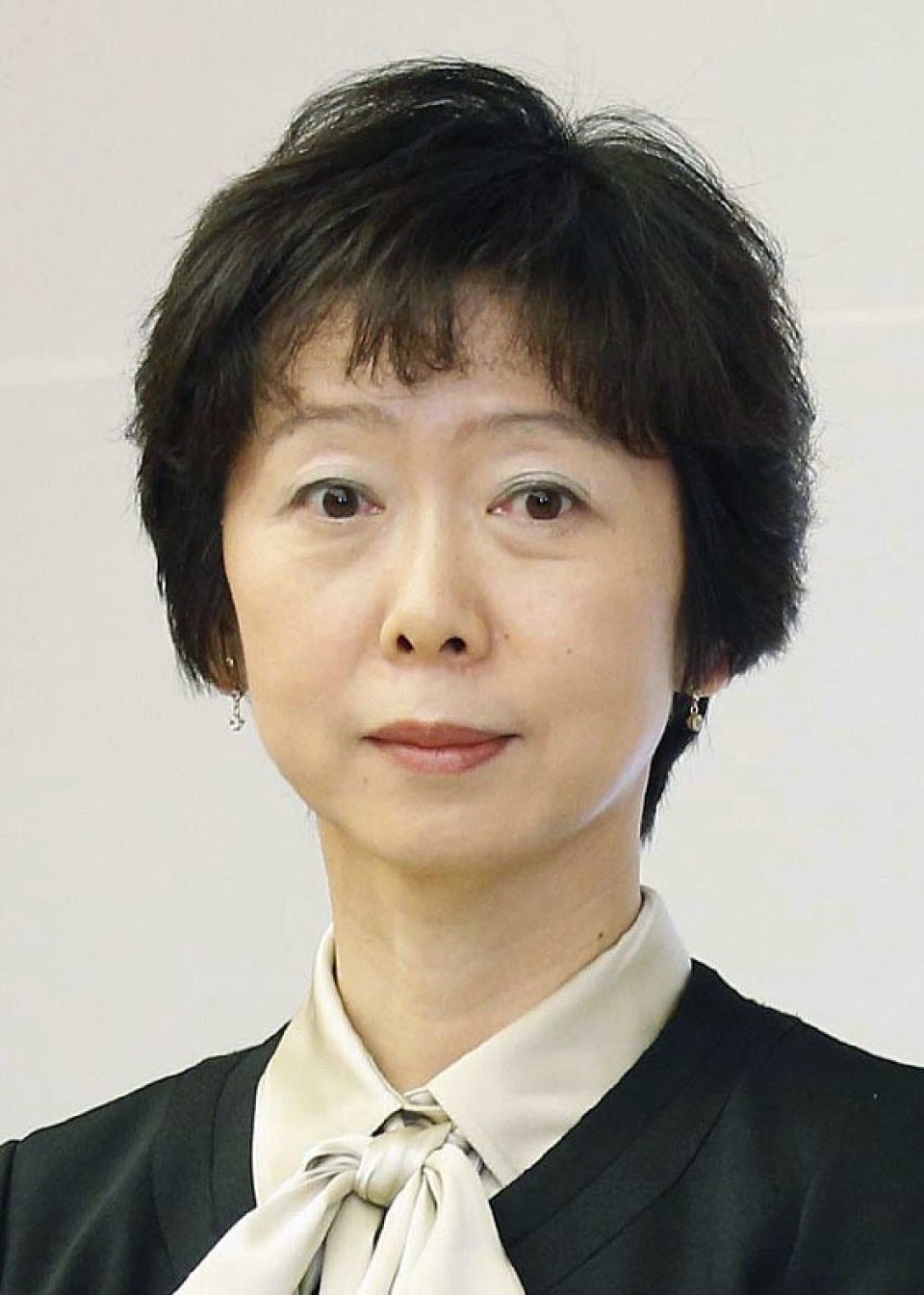 Cabinet Public Relations Secretary Makiko Yamada was hospitalized Sunday afternoon due to ill health requiring about two weeks of treatment and reported later that day she can no longer fulfill her duties, Chief Cabinet Secretary Katsunobu Kato said at a press conference.

Her abrupt departure is yet another blow to Suga, who has been struggling with falling public support after a series of scandals involving government officials and criticism over his response to the coronavirus pandemic.

Yamada, 60, came under criticism after she was found to have been treated to a dinner worth 74,000 yen ($700) in Tokyo in 2019 hosted by Tohokushinsha Film Corp. executives, including Seigo Suga. At the time, she was a senior bureaucrat at the Internal Affairs and Communications Ministry.

The dinner was deemed to violate the national public service ethics law, which prohibits receiving favors from stakeholders, as the company runs a satellite broadcasting business to which the ministry grants licenses.

Suga said he deemed Yamada's resignation as "unavoidable" and apologized at a session of the House of Representatives Budget Committee for the scandal involving his son, saying the government must "deeply reflect on severely damaging people's trust."

"I had appointed her as a Cabinet public relations secretary as I had high hopes for her, as someone who had much experience under the previous administration and had also served as a secretary" for then-Prime Minister Shinzo Abe, Suga told reporters later in the day. 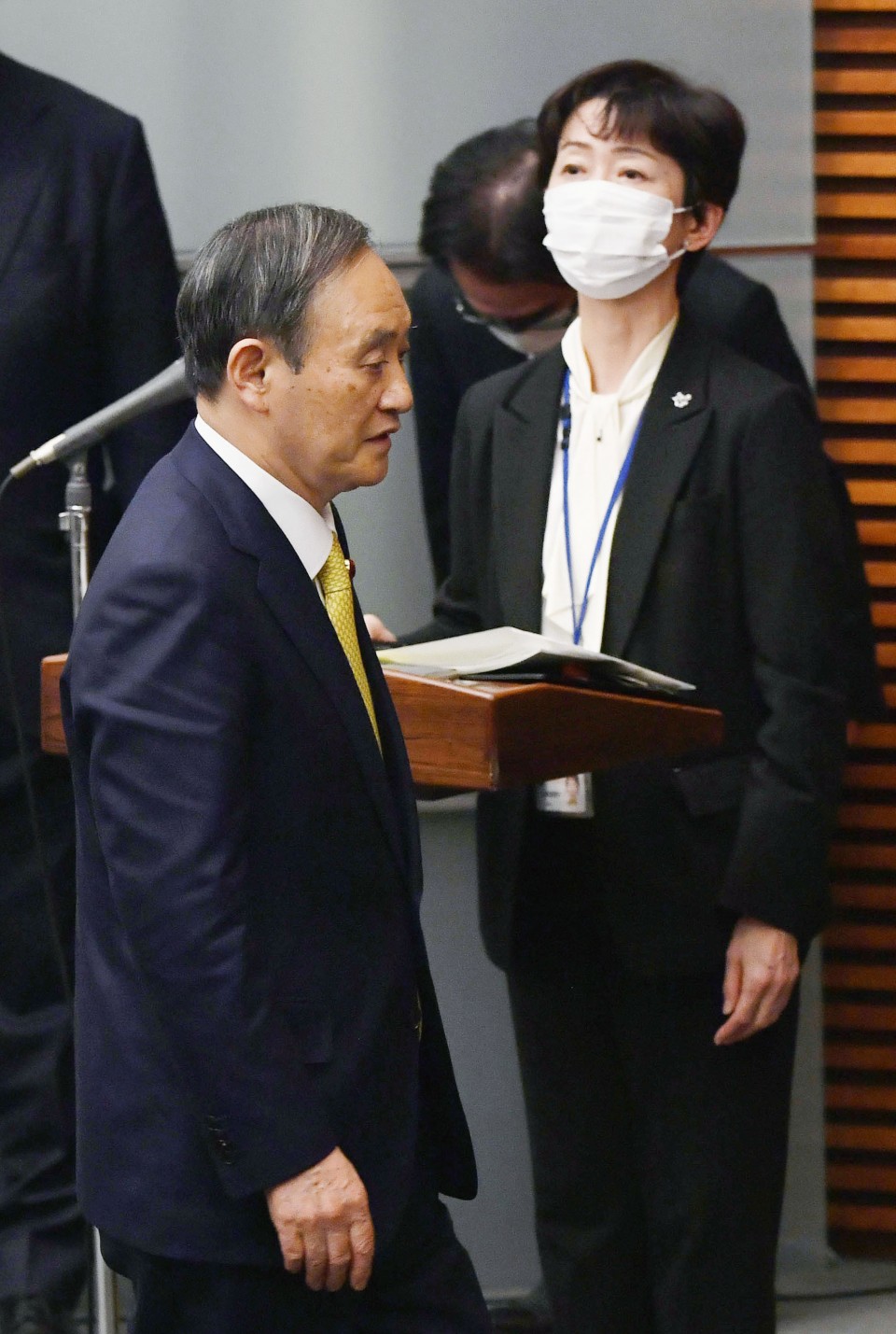 "It is very regrettable that she is leaving like this," Suga said, adding the government plans to pick her successor as soon as possible.

The Cabinet press secretary moderates Suga's press conferences, with one possibly being held this week as the government decides whether to lift the COVID-19 state of emergency in the Tokyo metropolitan area on March 7 as planned.

Kato, the government's top spokesman, did not disclose the amount of Yamada's retirement payment, citing privacy. She had been due to appear in parliament to face questioning over the scandal later Monday.

Yukio Edano, who heads the main opposition Constitutional Democratic Party of Japan, criticized Yamada's resignation as "coming too late" and told the lower house committee that Suga should have asked her to resign last week when other officials were reprimanded over the scandal.

Eleven officials of the communications ministry were reprimanded last week after they were wined and dined by Tohokushinsha Film executives, some of them by Suga's son.

Yamada, however, escaped punishment as she has already left the ministry, and the ethics code does not cover an individual granted special status to serve in a government post. She offered to forfeit 60 percent of her salary for one month, or approximately 700,000 yen, over the scandal.

But according to a source at the prime minister's office, consensus quickly grew that Yamada should be punished more severely after Tohokushinsha announced its president, Kiyotaka Ninomiya, was stepping down and it had dismissed Seigo Suga as head of hobby and entertainment community operations in its media business division.

The scandal has fanned concerns within the ruling coalition of the Liberal Democratic Party and Komeito that Suga, whose Cabinet approval rating has already fallen to 38.8 percent according to a Kyodo News poll last month, could further lose his political clout.

"It's a remarkable chain of negative events," said one former Cabinet member who spoke on condition of anonymity. "If public discontent continues to grow, it will be no laughing matter."

Many officials in the communications ministry voiced surprise and regret over the departure of Yamada, who was a leading figure for women's empowerment, having been Japan's first female Cabinet public relations secretary under Suga and the first female executive secretary for a prime minister under his predecessor Shinzo Abe.

Some others were worried about the possibility that the punishment given to the reprimanded officials could be retroactively made heavier.

"I wonder what would happen to the senior officials who have been treated to meals multiple times when she resigns for being treated to one dinner, albeit it was expensive," said one official.

Yamada's hospitalization, however, came as little surprise in Japan, where it is not rare for a public figure to suddenly vanish from the public eye to receive treatment when they become embroiled in a scandal.

Former Japanese farm minister Takamori Yoshikawa, who was indicted without arrest for receiving 5 million yen in bribes from a representative of an egg producer Akita Foods Co., was hospitalized for treatment of arrhythmia late last year.

Former House of Councillors member Anri Kawai, who resigned after being found guilty of vote buying in the 2019 election, was admitted to a hospital in March last year and later said she was diagnosed as requiring rest for about two weeks due to a nervous breakdown.