Less than three years after knee injuries threatened to end his career, sekiwake Terunofuji capped his incredible comeback on Sunday, winning the Spring Grand Sumo Tournament for his third-career title and earning re-promotion to the elite ozeki rank.

The 29-year-old, who last wrestled at the sport's second-highest rank in September 2017, entered the 15th and final day at Tokyo's Ryogoku Kokugikan with an 11-3 record and a one-win lead over three wrestlers with 10 wins. 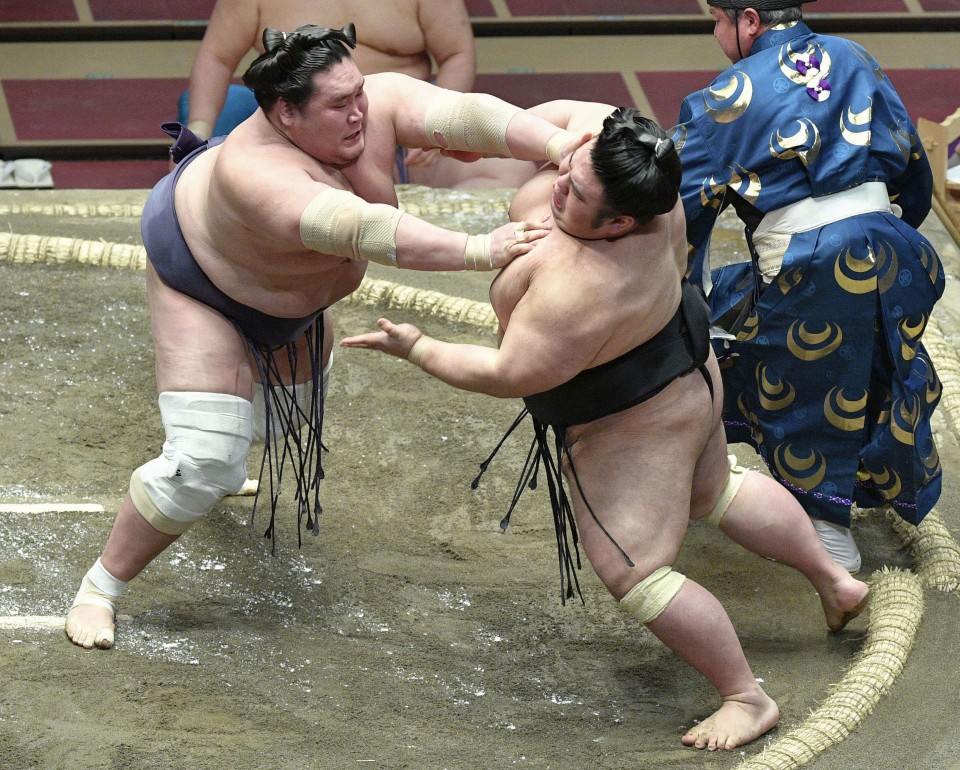 Terunofuji (L) defeats Takakeisho to claim his third career top-division title on the final day of the Spring Grand Sumo Tournament at Ryogoku Kokugikan in Tokyo on March 28, 2021. (Kyodo) ==Kyodo

In the first clash between the two since Takakeisho defeated Terunofuji in November's championship playoff, the sekiwake tried to grab his opponent by the arm from the jump and swing him out. Unfortunately, he missed and found himself pressed back to the straw.

But Takakeisho, whose specialty is pushing and shoving, failed to get that job done. Terunofuji fought his way back from the brink, and survived an effort by Takakeisho to pull him down by the arm before savagely thrusting him out.

Terunofuji entered the meet focused on returning to his former rank and got what he came for when Japan Sumo Association President Hakkaku agreed to have the JSA's board of directors meet to discuss his promotion.

"I'm relieved," said Terunofuji, who also collected his third career Outstanding Peformance Prize. "I was just taking it one day at a time (in my comeback), training hard every day. Doing so, I believed this day would come, so I'm really happy."

"I focused on being confident in the ring today, and that was my main thing. Sumo doesn't always go the way you want it to."

"Without the support of the fans I wouldn't be standing here today. That support made it possible. Wrestlers train hard and fight hard, and that's one way we can show our appreciation for that support."

Terunofuji's comeback drama provides a boost for the JSA following the retirement of one grand champion, Kakuryu, this month, and the news that its other yokozuna, 44-time champion Hakuho, will likely be out until July with knee surgery. 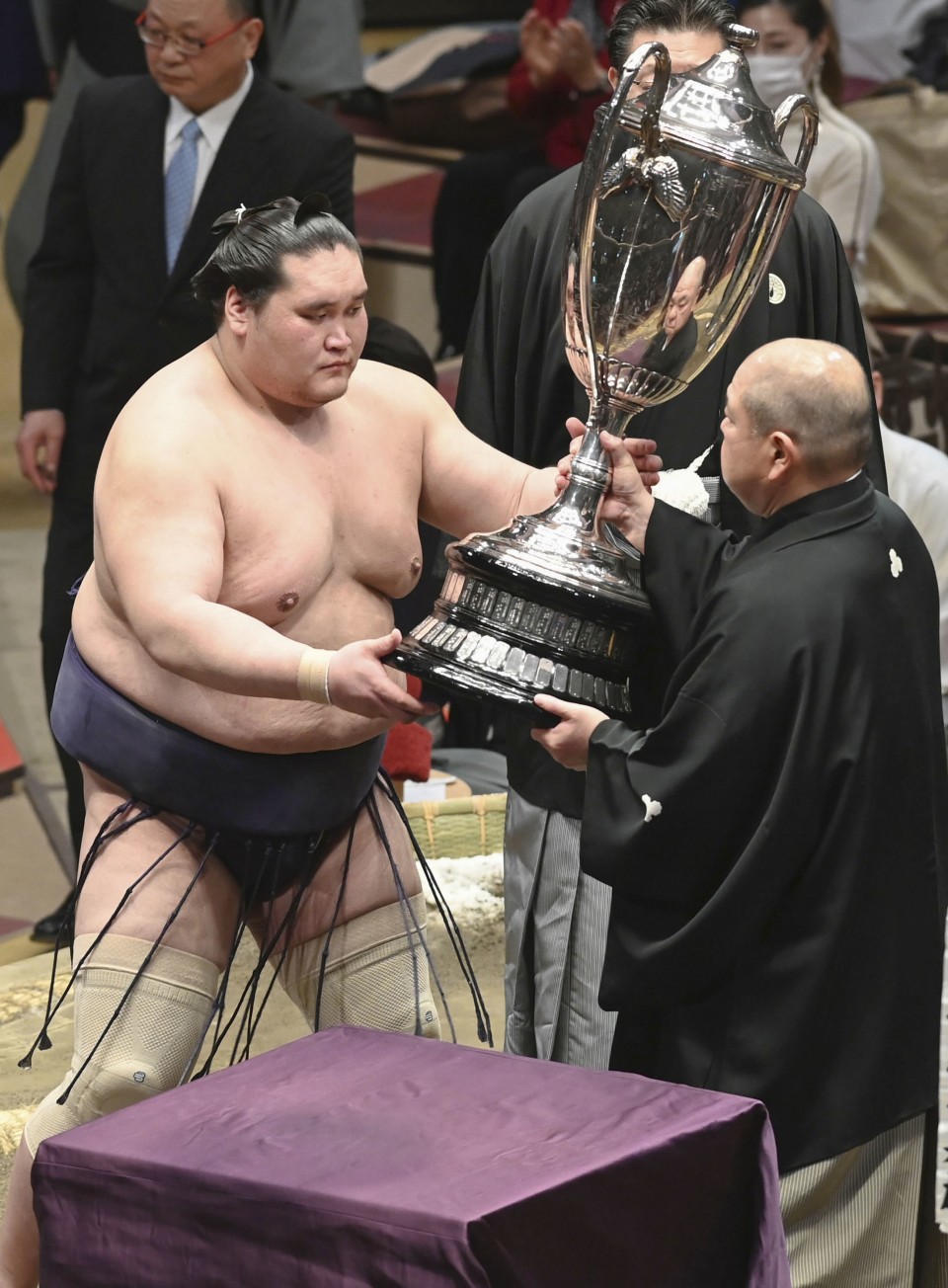 Terunofuji (L) receives the championship trophy from Hakkaku, head of the Japan Sumo Association, after winning the Spring Grand Sumo Tournament on its final day at Ryogoku Kokugikan in Tokyo on March 28, 2021. (Pool photo) (Kyodo) ==Kyodo

Bulgarian No. 12 Aoiyama improved to 11-4 by handing komusubi Takayasu (10-5) his third straight loss in another battle of championship hopefuls.

After an inconclusive charge, Takayasu and Aoiyama each tried to slap the other down. Takayasu tried first with one hand around the Bulgarian's neck and failed. Aoiyama, however, got both hands behind his opponent's head and brought him down.

Even though Terunofuji's win eliminated Aoiyama's slim shot at a championship, the Bulgarian received his fourth Fighting Spirit Prize.

In the tournament's final bout, Asanoyama (10-5) threw fellow ozeki Shodai, who suffered his eighth loss, and will need a minimum of eight wins at the next tourney in May to remain at the sport's second-highest rank.

Fighting together in the makuuchi division for the first time, siblings No. 15 Hidenoumi and his younger brother, No. 8 Tobizaru, each won their 10th bout.

No. 2 Wakatakakage (10-5) shoved out the dangerous No. 2 Hokutofuji (9-6) to finish off a tournament in which he twice beat ozeki opponents and earned his first career special prize, the Technique Prize.

Terunofuji, who earned his first promotion to ozeki after winning the May 2015 grand tournament, soon began battling knee injuries. He had surgeries on both knees on June 25, 2018, and missed four straight grand tournaments.

When he returned to the ring on March 10, 2019, in the fifth-tier jonidan division, he became the first former ozeki to compete in any of the sport's three lowest competitions.

After winning the second-tier juryo division in January 2020 and following that with a 10-5 record a year ago, Terunofuji became the first wrestler to return to the makuuchi after sinking as far as the jonidan ranks.

His return was delayed until last July after the May tourney was canceled due to the coronavirus. His 13-2 record made him the third wrestler in history to win a championship while fighting from the makuuchi division's lowest rung.