Komusubi Takayasu claimed his eighth victory Monday to maintain the outright lead at the Spring Grand Sumo Tournament, while sekiwake Terunofuji and rank-and-filer Chiyonokuni both stayed one win off the pace after bouncing back from defeats the previous day.

Takayasu (8-1) secured a winning record on Day 9 of the 15-day meet at Ryogoku Kokugikan after comfortably beating No. 1 maegashira Onosho (2-7). The former ozeki halted his rank-and-file opponent's low drive and forced him toward the straw before slapping him down to the sandy surface. 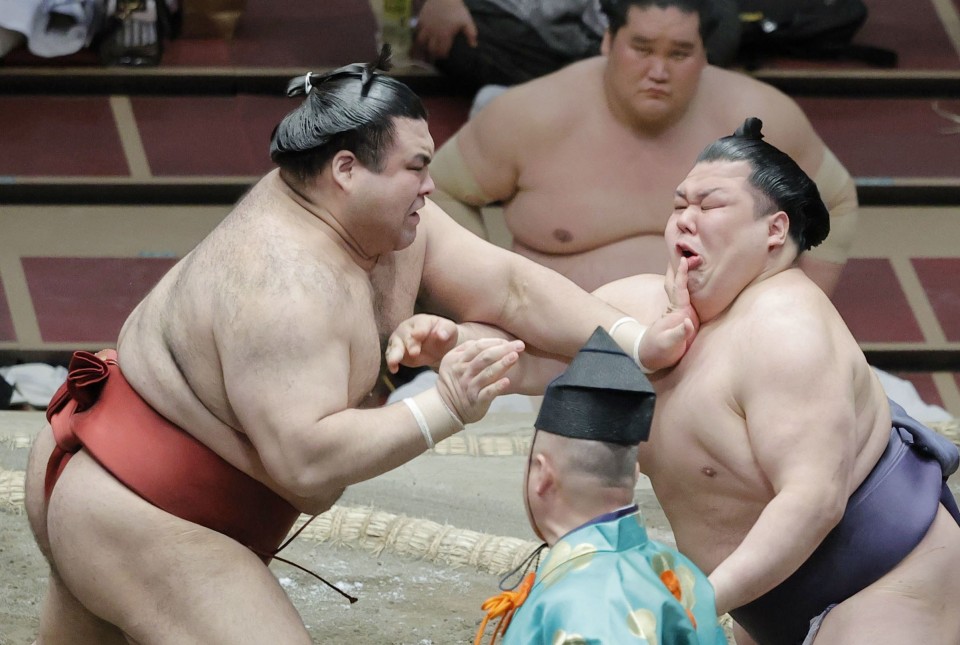 Fellow former ozeki Terunofuji, who lost to Takayasu on Day 8, advanced to 7-2 after beating No. 4 Myogiryu (5-4).

Terunofuji pinned both of Myogiryu's arms and stopped the maegashira in his tracks before claiming victory by arm-barring force out.

The big Mongolian needs 10 or more wins at the current meet to complete a remarkable return to ozeki, a rank he last held in 2017.

After debilitating knee injuries saw him drop as low as the fifth-tier jonidan division in March 2019, he battled back to the top tier and has claimed 24 wins from the past two tournaments.

No. 9 Chiyonokuni improved to 7-2 after finding a way past former sekiwake and one-time Emperor's Cup winner Tamawashi (5-4).

Chiyonokuni moved slightly to his left after the initial charge and swung the No. 6 maegashira to the edge before calmly pulling him down.

Ozeki Asanoyama (6-3) grappled No. 3 Shimanoumi (2-7) over the straw bales in a swift victory, while ozeki Takakeisho also secured his sixth win at the expense of komusubi Mitakeumi (4-5), who offered a little more resistance than Shimanoumi, but not enough to avoid a push-out defeat.

Takakeisho is fighting as a demotion-threatened "kadoban" ozeki after posting a losing record in January and needs eight wins here to retain his rank.

The struggles continued for fellow ozeki Shodai, who fell to komusubi Daieisho (4-5). Following a poor start to his first tournament since winning the Emperor's Cup in January, Daieisho achieved a third straight win by thrusting out Shodai (4-5) in a one-sided battle.

Sekiwake Takanosho (6-3) pushed out No. 4 Kiribayama (3-6) in a matter of seconds to stop his two-match losing run.

The March tourney is traditionally held in Osaka, where it opened a year ago as the first grand tournament behind closed doors. But amid the difficulties posed by the ongoing pandemic, the Japan Sumo Association chose to stage its fifth straight meet in Tokyo.

A total of 28 lower-ranked wrestlers have been ruled out from the meet for coronavirus-related reasons, compared to 65 sidelined in January. Both yokozuna, Kakuryu and Hakuho, are out with injuries.