Japan has referred to Myanmar's military-appointed top diplomat as "foreign minister," despite a backlash on social media for doing so, a Foreign Ministry official said Tuesday.

In a statement posted on Facebook on Monday night, the Japanese Embassy in Yangon said that at a meeting in the capital Naypyitaw earlier in the day, Ambassador Ichiro Maruyama conveyed Japan's position on Myanmar's situation to "Foreign Minister U Wanna Maung Lwin." 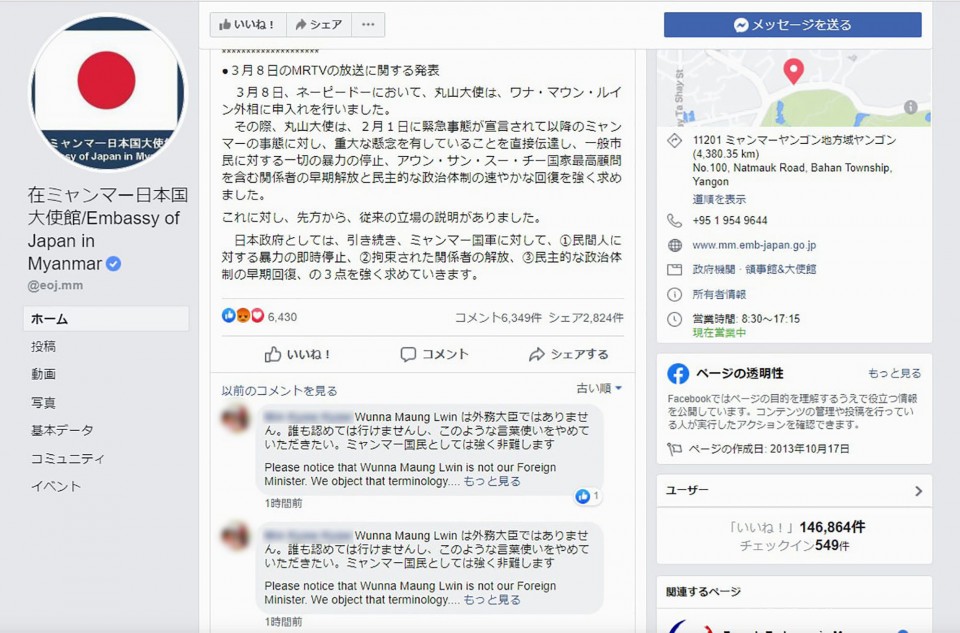 The statement, written in Burmese, English and Japanese, said the envoy urged a halt to violence against civilians and an immediate release of those detained, including ousted leader Aung San Suu Kyi.

The statement has drawn over 7,000 comments on Facebook. "Wunna Maung Lwin isn't our foreign minister," one user commented. "No one recognizes him" as foreign minister, commented another. Others pleaded not to use the title to refer to him.

Since the coup, Japan has been increasing pressure on Myanmar's military government.

"It's not a question of whether we recognize it or not," the ministry official said of the legitimacy of the military government, adding that if Japan recognizes it, the country "would not make strong calls" for the release of detained leaders, such as Suu Kyi.

Japan is referring to Wunna Maung Lwin as foreign minister "to make sure we can get our message across (to the military government) and see our demands realized," the official added.

At an informal foreign ministers meeting of the Association of the Southeast Asian Nations on March 2, Indonesia and Singapore distanced themselves from Myanmar's military government by refraining from referring to Wunna Maung Lwin as "foreign minister," according to an ASEAN diplomatic source.

Thousands protest in defiance of curfew in Myanmar's Yangon