Sekiwake Terunofuji secured his 11th win and took the sole lead of the Spring Grand Sumo Tournament on Saturday, the 14th day, after komusubi Takayasu's dream of a maiden Emperor's Cup slipped further away with a second straight defeat.

Terunofuji, who has all but secured his return to the second-highest rank of ozeki he last held in 2017, was at his composed best as he forced out ozeki Asanoyama (9-5) at Ryogoku Kokugikan. 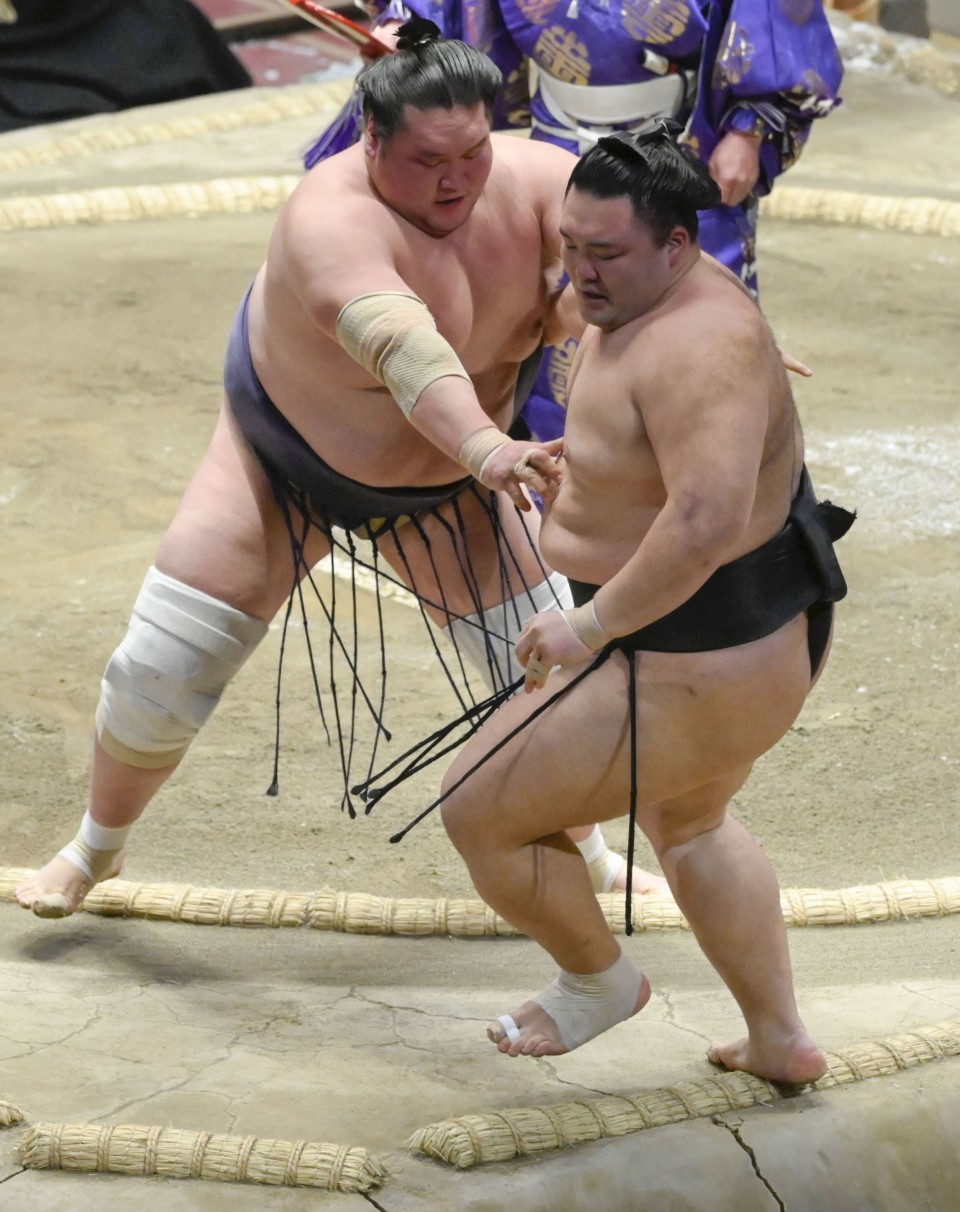 Terunofuji reacted well to a surprise opening by Asanoyama, who charged with both hands thrust forward to keep the sekiwake at a distance. But the ploy only worked in favor of Terunofuji, whose left overarm belt hold proved decisive as Asanoyama finally floundered after nearly throwing the Mongolian over the straw bales.

"I thought, 'If I keep my cool, I can do this," Terunofuji said afterward.

Terunofuji's force-out victory took him within a win of his third championship. His last title came in July 2020, when he competed in the elite makuuchi division's lowest rank in his comeback from multiple knee surgeries that had dropped him into the fifth-tier jonidan division.

Takayasu, who held the sole lead two days earlier, is now a win behind Terunofuji, joined at 10-4 by ozeki Takakeisho and rank-and-filer Aoiyama.

After a soft initial charge, Takayasu remained poised against tricky No. 8 Tobizaru (9-5) and eventually immobilized him by grabbing his belt with both hands.

With little to work with, Tobizaru put a right arm lock around the komusubi's neck. When that did not get immediate results, Tobizaru forced Takayasu off balance with a minor inner foot sweep.

That sent the pair locked together and struggling unbalanced toward the edge, Takayasu moved to throw his opponent while Tobizaru, whose name can be read as "flying monkey," reasserted his lock on the komusubi's neck. Tobizaru was able to apply enough torque to Takayasu's neck to bring him down at the straw for the win as he himself was sent airborne from the ring.

Takakeisho stayed in the title chase with a routine win over out-of-form fellow ozeki Shodai (7-7).

A day after his win over Takayasu, No. 2 Wakatakakage (9-5) saw his seven-bout winning run end at the hands of another title-chaser, Aoiyama. The Bulgarian No. 12 earned his sixth straight win.

No. 15 Hidenoumi (9-5), Tobizaru's older brother, lost his outside chance for the title, succumbing to Georgian No. 7 Tochinoshin (7-7).

Sekiwake Takanosho forced out giant Mongolian No. 6 Ichinojo, leaving both wrestlers at 7-7.

January's champion, komusubi Daieisho (7-7), was unable to secure his winning record, falling to an overarm throw by No. 4 Kiribayama (6-8).