TOKYO/WASHINGTON - The leaders of Japan, the United States, Australia and India agreed Friday to work to expand COVID-19 vaccine production for developing countries amid China's growing influence, while pursuing collaboration toward a rules-based maritime order in disputed waters.

Noting that the so-called Quad countries are united in "a shared vision for the free and open Indo-Pacific," the leaders pledged in their first-ever summit meeting that they will strengthen cooperation on "the defining challenges of our time" ranging from the coronavirus pandemic and climate change to technology and maritime issues. 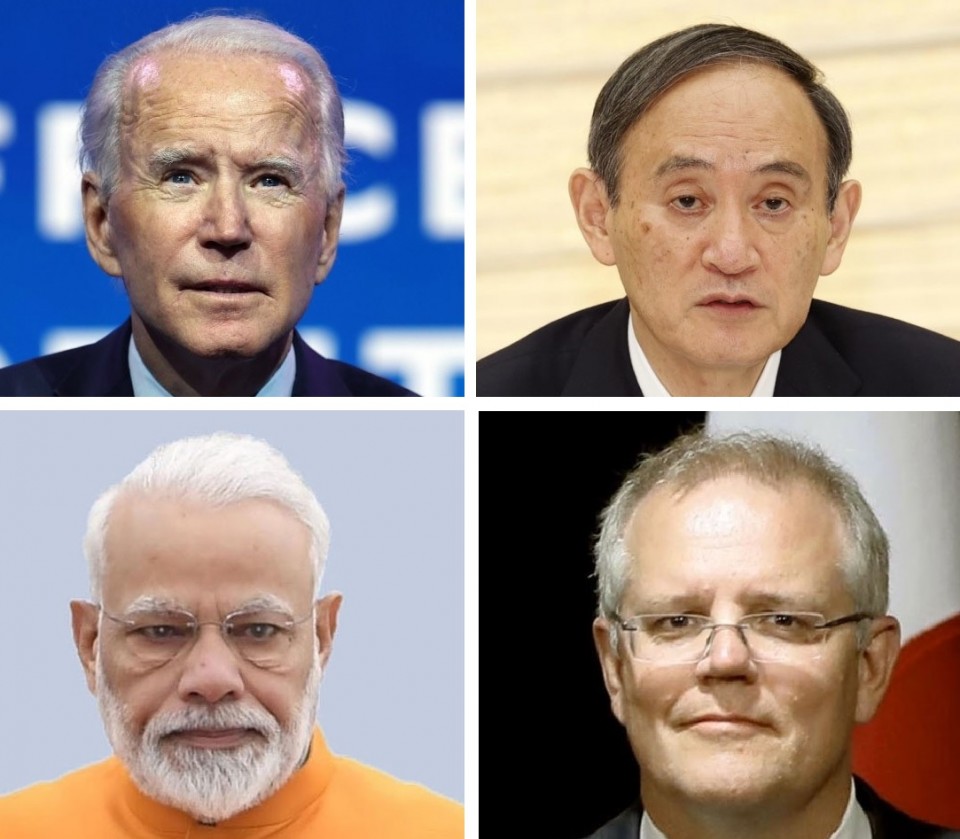 To address vaccine supply shortages across Southeast Asia and elsewhere, the four countries said they are committed to delivering up to 1 billion doses by the end of 2022 through financing vehicles that allow a substantial increase in production capacity in India.

The move is seen as a counter to the "vaccine diplomacy" of China, which has been offering free shots to developing countries.

A joint statement outlining the agreements did not explicitly mention China. But U.S. National Security Adviser Jake Sullivan said in Washington that the leaders discussed the challenge posed by Beijing and made clear that "none of them have any illusions" about the country.

Suga said he voiced strong opposition to China's "unilateral attempts to change the status quo" in surrounding waters and raised grave concerns regarding last month's military coup in Myanmar during the meeting.

The joint statement said the Quad will "continue to prioritize the role of international law in the maritime domain" and facilitate collaboration to "meet challenges to the rules-based maritime order" in the East and South China seas.

China is embroiled in a number of territorial disputes in surrounding waters, including over the Japan-administered Senkaku Islands, which Beijing claims and calls Diaoyu. It has also continued the militarization of artificial islands in the disputed South China Sea despite an international ruling in 2016 against its claims.

The Quad countries, meanwhile, affirmed their commitment to the complete denuclearization of North Korea and also called for "immediate resolution" of the issue of Pyongyang's past abduction of Japanese nationals, according to the joint statement.

To deepen their engagement, the four countries will set up working groups focused on vaccine distribution, climate change, and standards and norms for emerging technologies such as 5G networks, an area where competition is intensifying between the United States and China.

The summit meeting was held at Washington's request as the Biden administration seeks to rally allies and like-minded countries to address what it has called "the biggest geopolitical test of the 21st century" in dealing with China.

Biden asserted at the outset of the meeting that the Quad is going to be "a vital arena for cooperation in the Indo-Pacific," and said the United States is committed to working with the other members in the region to "achieve stability."

The Quad was originally formed in 2004 in response to the Indian Ocean earthquake and tsunami.

The framework has seen a resurgence in recent years with an increased focus on advancing concepts such as freedom of navigation in the Indo-Pacific region and the rule of law amid China's growing assertiveness.

China has accused the Quad of being the beginnings of an Asian version of the North Atlantic Treaty Organization seeking to undermine its rise.

Hours before Friday's meeting, a Chinese Foreign Ministry spokesman called on the group not to "target a specific country."