A railway company in Iwate, northeastern Japan, has started operating train cars adorned with decorative plates symbolizing Kuwait as gratitude for the financial aid received from the Middle East country in the aftermath of the 2011 earthquake and tsunami. 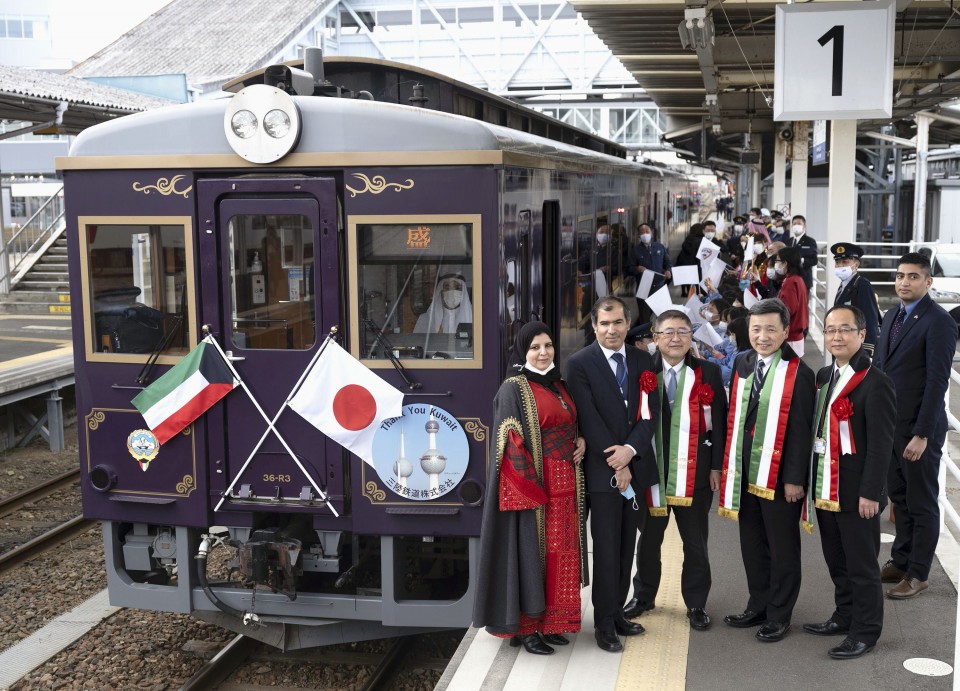 A ceremony is held at Miyako Station, Iwate Prefecture, on March 1, 2021, to mark the start of operations by Sanriku Railway Co. of train cars adorned with decorative plates symbolizing Kuwait. (Kyodo)

Sanriku Railway Co., which operates a train service along part of the coastline devastated by the disaster, purchased eight new carriages with financial aid from the Kuwaiti government worth 2 billion yen ($19 million).

The railway firm will run the eight cars -- which feature four different designs of plate, including one depicting Kuwait Towers, an iconic symbol of the country -- until the end of this month.

"We received a great contribution (from Kuwait) to help resume operations," Ichiro Nakamura, president of Sanriku Railway, said in a ceremony held at Miyako Station on Monday.

Kuwaiti Ambassador to Japan Hasan Mohammad Zaman said he hopes the railway operator will continue to relay messages of hope for reconstruction from the disaster and the future.

The track and stations along the line operated by Sanriku Railway were heavily damaged by the magnitude-9.0 quake and ensuing tsunami on March 11, 2011. The service was partially resumed in April 2013, before returning to full operation the following year.