A large photo on display at a memorial museum for the 2011 earthquake-tsunami disaster in Kesennuma, Miyagi Prefecture in northeastern Japan, shows a 10-year-old boy walking in front of a pile of rubble, his jaw clenched and a bottle of water in each hand. 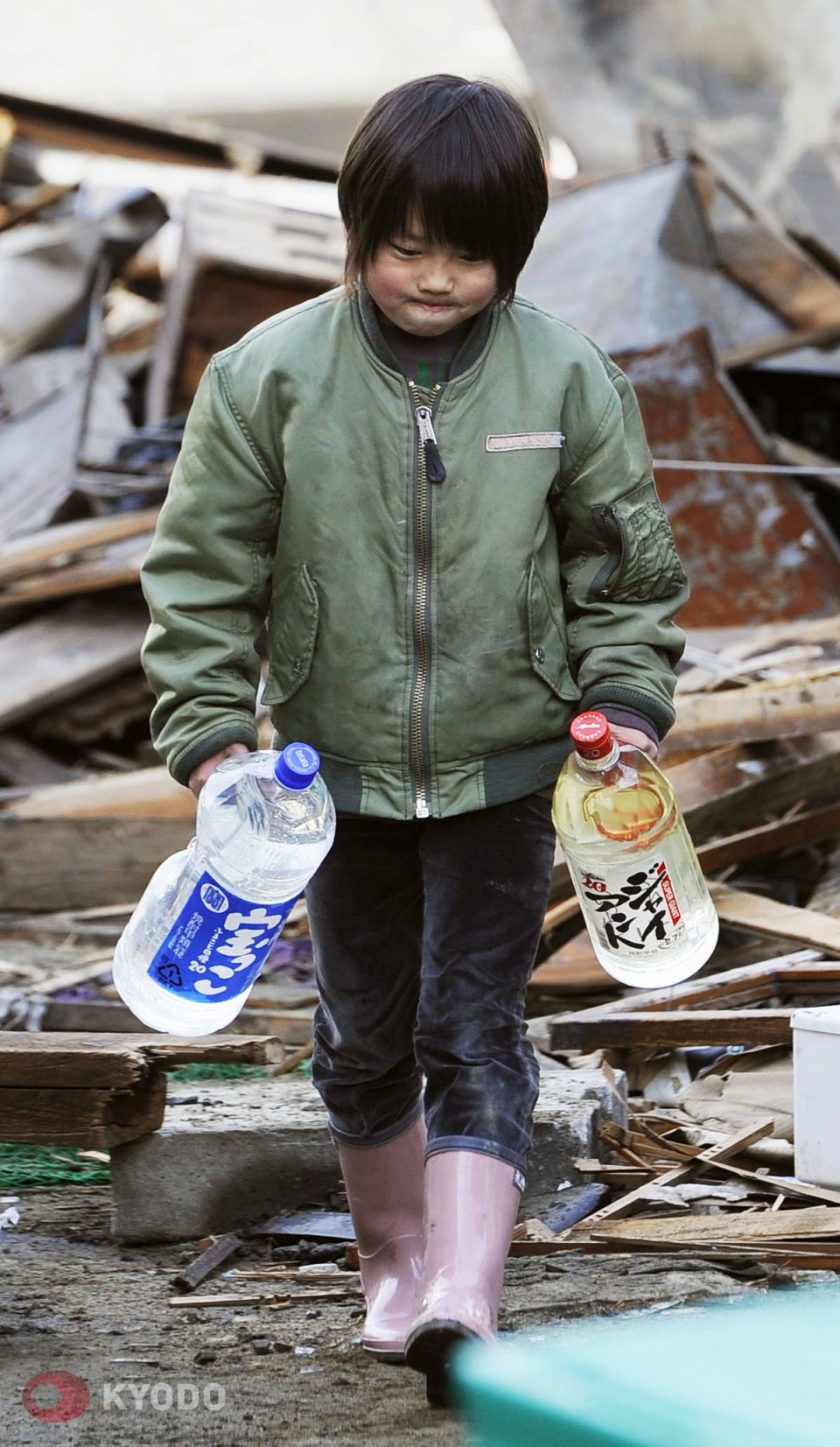 The picture of Kaito Matsumoto carrying water from a well at an evacuation center was one of the images shown around the world following the March 11 disaster that killed more than 15,000.

Now aged 20, Matsumoto said he has received more than 300 letters of support from people across Japan who have seen the photo, including one from the late veteran actor Ken Takakura.

Among others that offered support was 81-year-old Natsu Kamada, who saw an article on Matsumoto in a local newspaper in Hokkaido.

Kamada initially sent Matsumoto and his family a box of potatoes and other vegetables that she had harvested six months after the magnitude 9.0 earthquake struck. 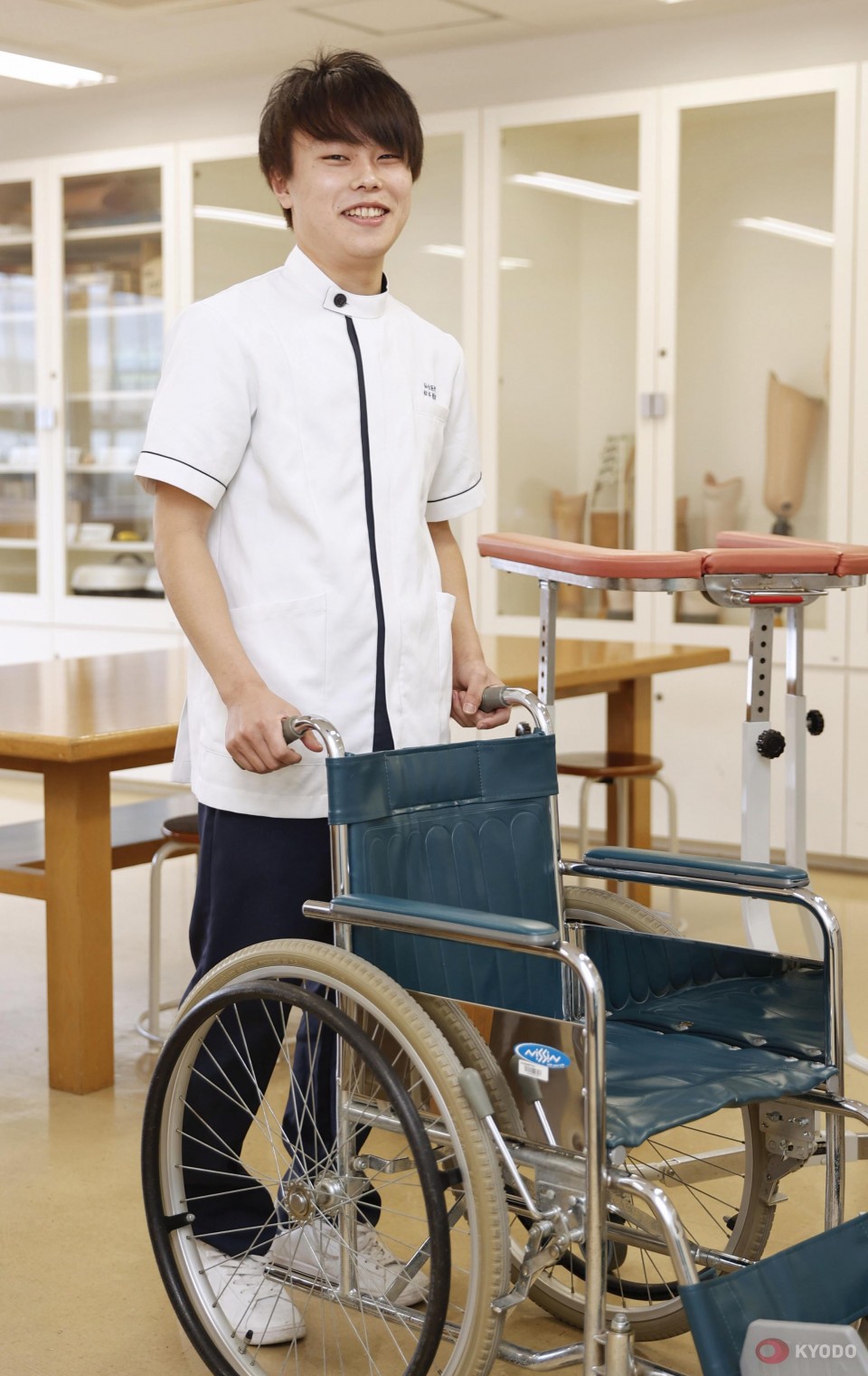 Kaito Matsumoto is pictured on Jan. 22, 2021, at a vocational school in Sendai. (Kyodo)

Fast forward 10 years and Matsumoto -- who lives away from home while he studies at a vocational school in Sendai, the capital of Miyagi Prefecture -- is still eating rice grown by Kamada.

Matsumoto is studying to be a physical therapist and has two more years before he qualifies.

He said the decision to follow that career path was made after he heard that many people with disabilities were unable to escape when the tsunami struck.

"I'd like to return the favor by showing my best efforts," Matsumoto said, referring to the encouragement he has received.

In 2015, Fumitoshi Kamino, his wife and three daughters began visiting areas in Japan that had been hit by natural disasters, so they could help serve food at evacuation centers.

The Kaminos lost their home in the 2011 disaster, but a year later opened an eatery in Ishinomaki, Miyagi Prefecture, in a building that is adorned with two reddish brown tiles found at the site of their former home. 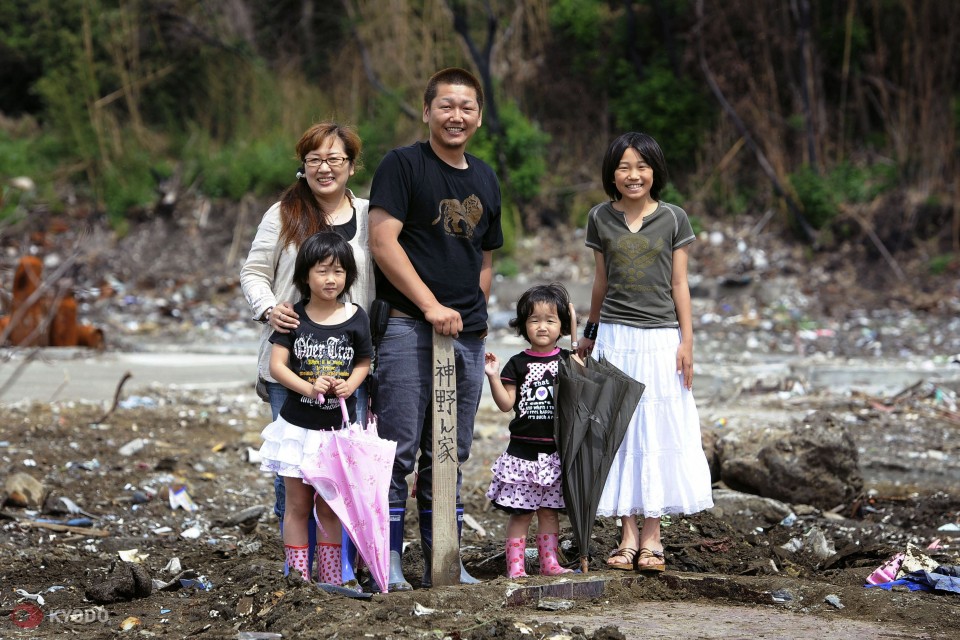 Fumitoshi Kamino (C) and family stand on the site of their former home in Ishinomaki, Miyagi Prefecture, on June 25, 2011. (Kyodo) 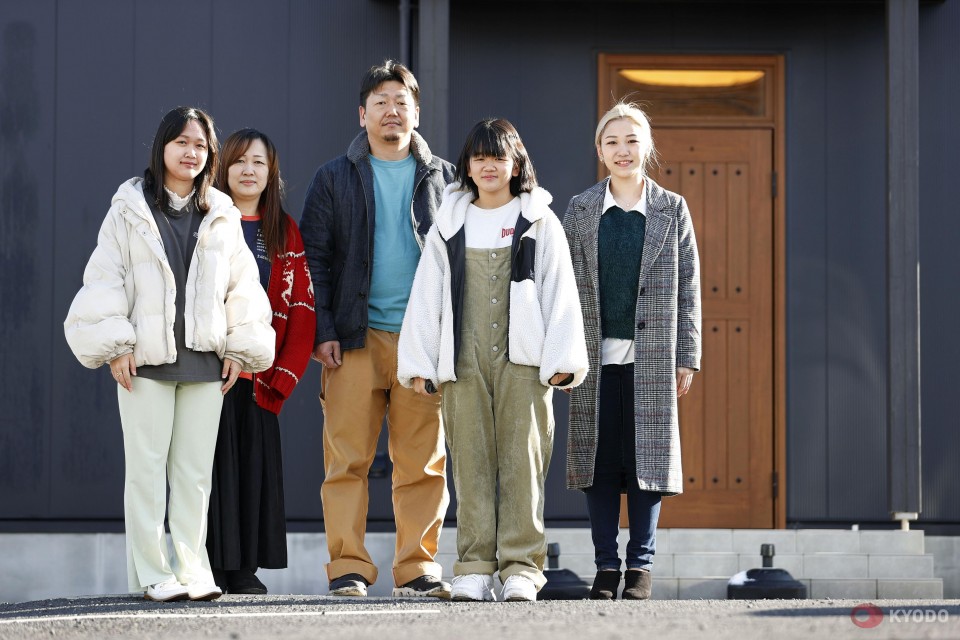 The Kaminos are pictured on Jan. 3, 2021, in front of their home-cum-eatery in Ishinomaki, Miyagi Prefecture. (Kyodo)

Kamino's daughters still get upset by words associated with the disaster such as "tsunami" and "3/11," but Kamino says he still asks them questions like "Where would you flee to from here?" in the hope that they always have a sense of danger and convey the lessons learned to others. 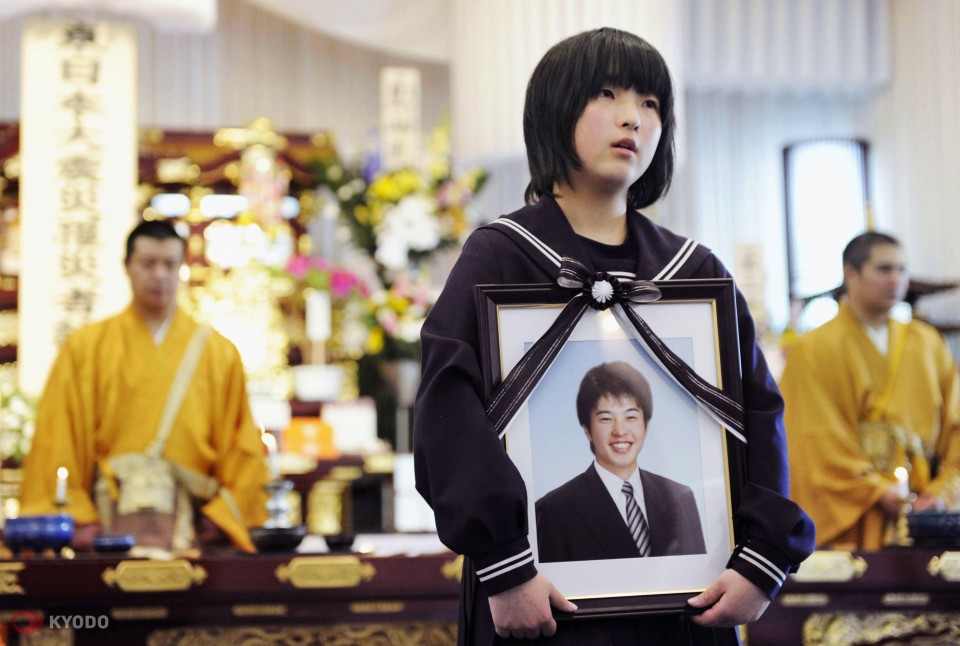 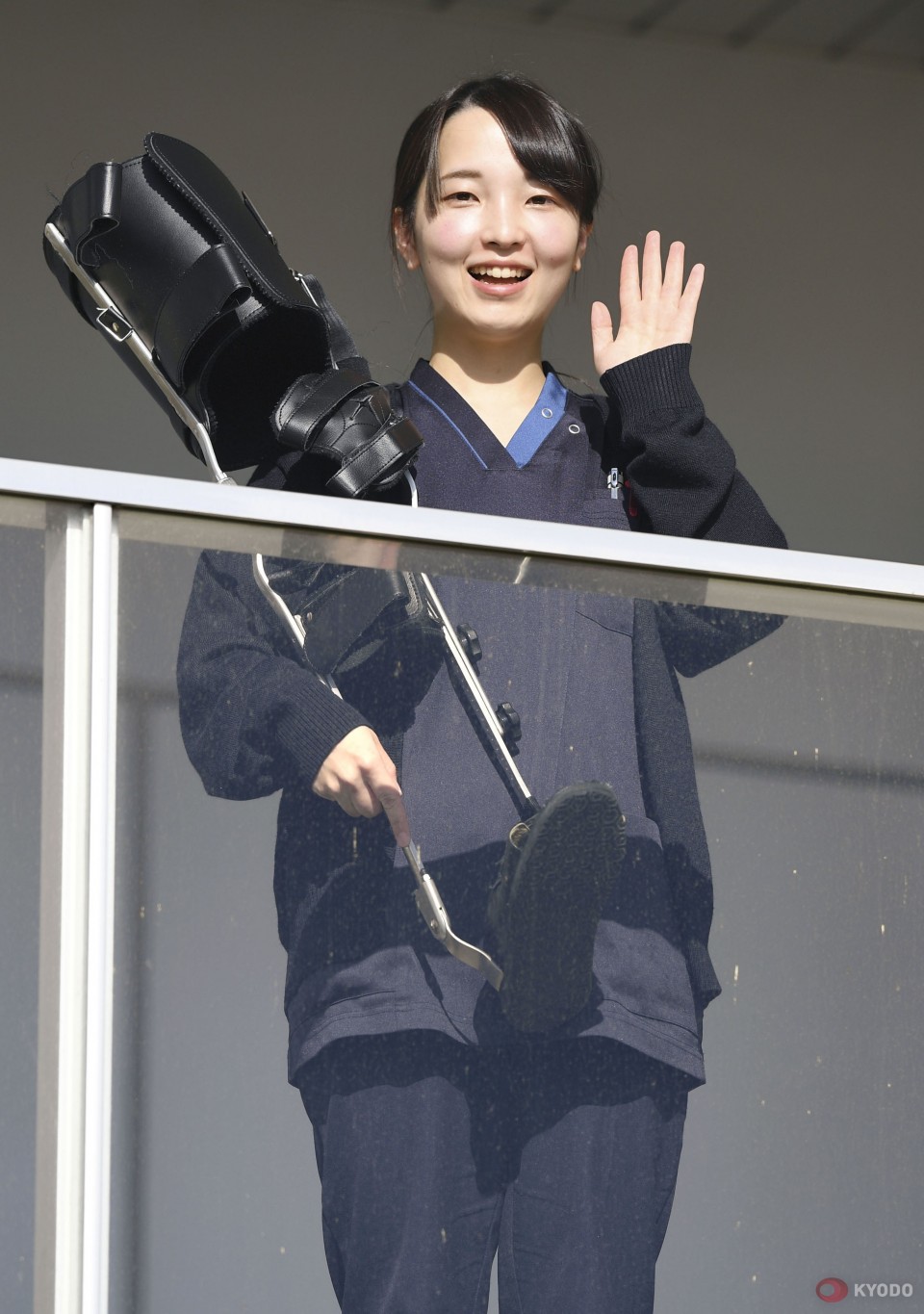 Minori Sato, a 25-year-old physical therapist in Soma, Fukushima Prefecture, asks herself almost every day what her elder brother would do if he were in her place.

Takanori Sato, who was 20 years old at the time, had initially escaped to higher ground after the earthquake struck. But he returned to help some elderly people and was swept away by the tsunami.

A shy teenager who tended to rely on her elder sibling, Minori Sato now helps people in need, just as her brother did.