The lawyer for Myanmar's deposed leader Aung San Suu Kyi, who is already facing charges of illegally importing and using radios, said Tuesday that she has been slapped with an additional criminal charge, making it likely that she will face an extended period of detention.

Khin Maung Zaw told Kyodo News that the new charge, involving violating the Natural Disaster Management Law, came to light as Suu Kyi's trial, unbeknownst to him, had already gotten under way at a court in the capital Naypyitaw via video conference Tuesday. 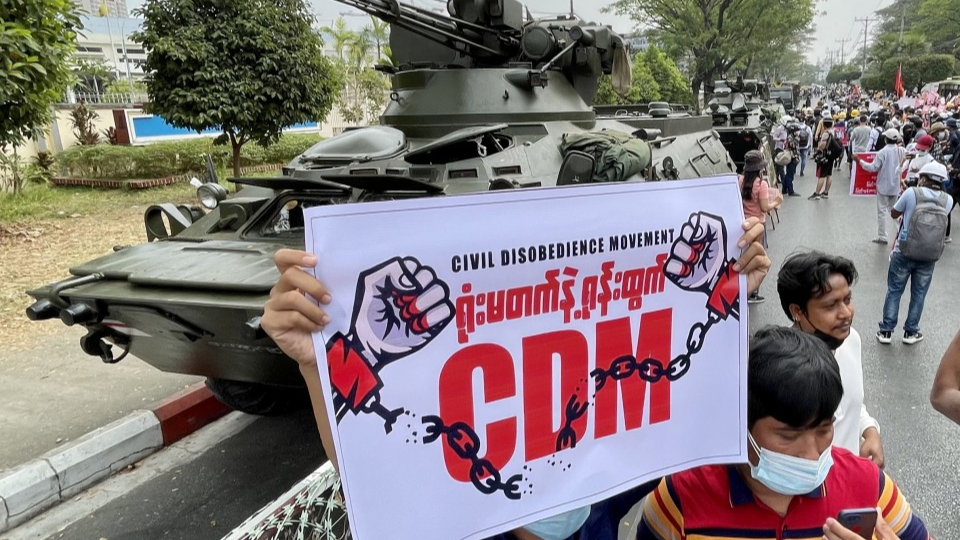 People protest in Yangon, Myanmar, on Feb. 15, 2021, against the military that has detained Aung San Suu Kyi and other government leaders since it staged a coup on Feb. 1. (Kyodo) ==Kyodo

It was previously thought that Monday was the deadline for Suu Kyi's court-approved detention for the first formal charge, but it was later learned that it had been extended until Wednesday.

According to the lawyer, her next trial date is set for March 1, with Suu Kyi to face questioning via video conference from her home in Naypyitaw where she is being detained. He also confirmed that the trial for deposed President Win Myint, charged with breaching coronavirus restrictions, also got under way on Tuesday.

Both face several years in prison if convicted of the obscure charges.

Earlier Tuesday, Myanmar's military spokesman criticized the anti-military protests being held across the country in the junta's first press conference since seizing power in a coup on Feb. 1.

Brigadier Gen. Zaw Min Tun criticized the demonstrations saying they have become "aggressive and violent." He said the demonstrators in various parts of the country were inciting violence and "illegally pressuring" civil servants to strike.

When asked at the press conference about Suu Kyi's condition, the military spokesman confirmed that she "is in good health."

Zaw Min Tun added there have been a series of attacks on police authorities in recent days and that a police officer who was assaulted a few days ago had died of his injuries.

Protesters continued to take to the streets of Naypyitaw and other parts of Myanmar on Tuesday, demanding the release of Suu Kyi and other leaders. However, concerns are mounting that the demonstrations are beginning to take a toll on medical services. 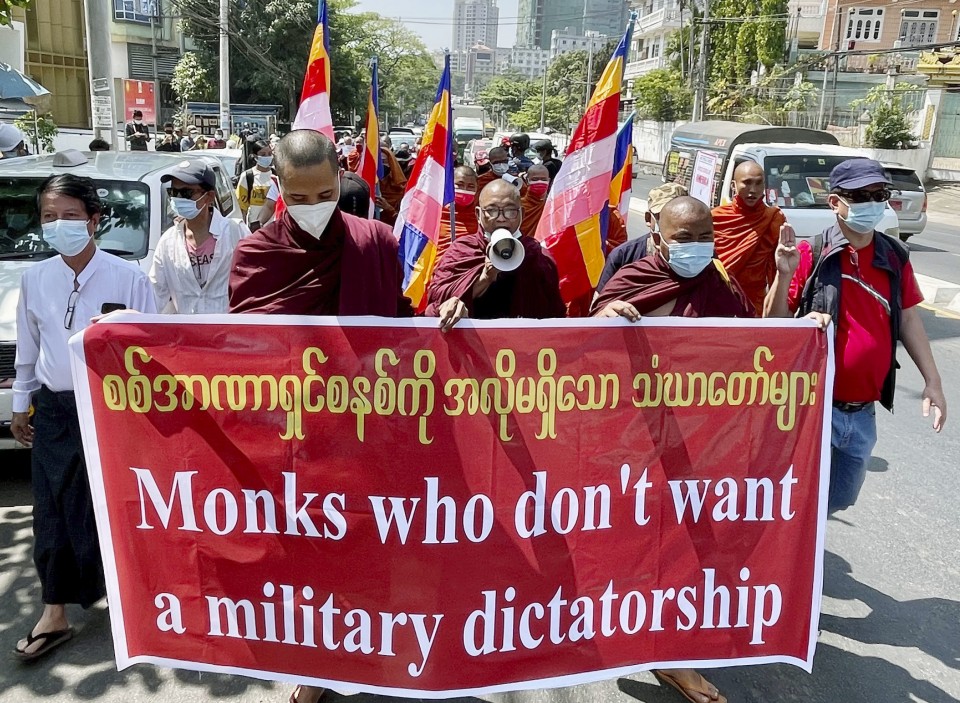 As the expanding groups of protesters include civil servants and medical workers, the country's hospitals and clinics face a shortage of staff, which is severely impacting the pace of COVID-19 testing.

In the country's largest city Yangon, a state medical institution, which had conducted the largest number of coronavirus tests in Myanmar, has halted operations since last Wednesday, posting a sign that reads "We have stopped providing coronavirus testing" at its entrance.

According to the nation's ministry of sports and medicine, the country was previously testing around 20,000 people a day, but since the coup, that number has dropped to only about a thousand per day.

While the military junta said it will provide coronavirus vaccinations imported from Russia to its people, a corporate worker in Yangon said, "I am afraid of the novel coronavirus, but I would rather suffer from it than obey the junta."

The military announced late Monday that the deputy head of the military had an online meeting with a United Nations special envoy on "efforts to maintain peace and security for the citizens," as well as their efforts to clarify to the international community about the actual situation in Myanmar, according to the military's information unit's Facebook page.

Meanwhile, the United Nations special envoy has warned Myanmar's army of "severe consequences" for any harsh response to protesters demonstrating against this month's coup.

"Ms. (Christine) Schraner Burgener has reinforced that the right of peaceful assembly must fully be respected and that demonstrators are not subjected to reprisals," a U.N. spokesman said.

In the second-largest city Mandalay, demonstrators spelled out "We want democracy" in huge white letters on one of the city's roads to draw international attention to the situation in the country.

During Tuesday's press conference, the military spokesman reiterated the junta's claim that the government takeover was not a coup, but a justified response to alleged massive irregularities in last November's general election, adding that it would hand back power after a new election.