More than a thousand demonstrators took to the streets of Yangon Saturday to protest a coup that saw power snatched from Myanmar's fledgling civilian government, as the military tried to quell growing dissent by blocking access to more social networking sites.

Students and workers gathered in central Yangon in the largest protest since the military seized power on Feb. 1. The demonstrators waved flags that read "Down with the military dictatorship" and "Let's fight for democracy." 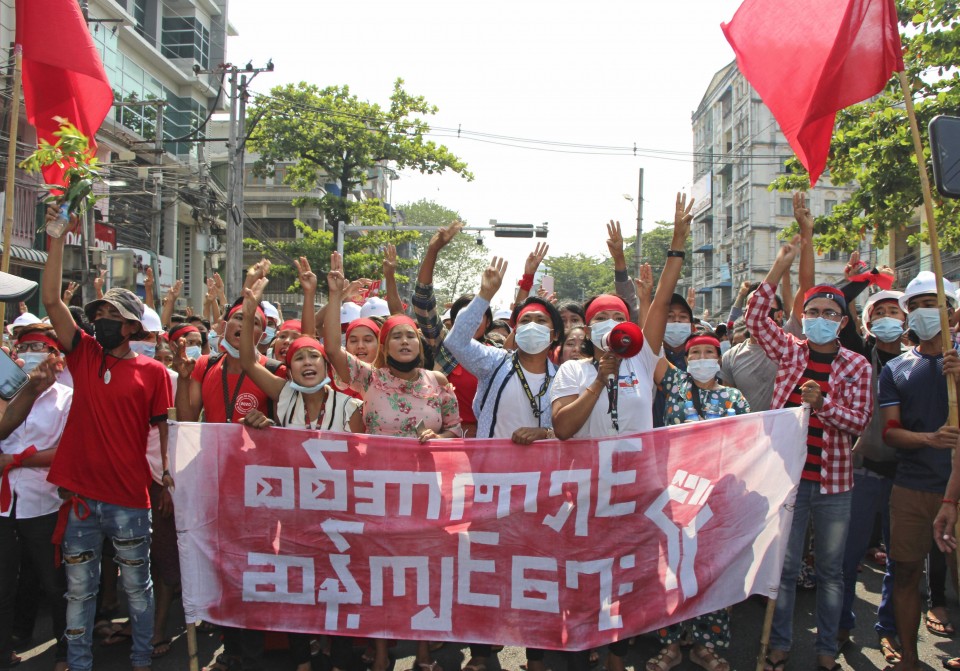 People hold a banner during a march in Yangon, Myanmar on Feb. 6, 2021 to protest a coup that saw power snatched from Myanmar's fledgling civilian government. (Kyodo)

The rally started around 10 a.m., prompting police authorities to bring in water cannon trucks and put up barricades, which temporarily raised tensions, but there were no reports of any clashes.

In an effort to stop widespread criticism of the coup, the ruling military junta ordered communications operators and internet service providers to cut access to Twitter and Instagram late Friday, until further notice, according to a statement by Norwegian-based Telenor, the country's second-largest mobile service provider.

The move expanded a social media ban that had already seen access to Facebook restricted since Thursday.

It is believed that roughly half the country's population of 54 million people use Facebook. It is also an important means of disseminating information for the ousted National League for Democracy party, led by Aung San Suu Kyi.

A Twitter spokesperson told Kyodo News the company is deeply concerned about internet services being blocked in the country.

"It undermines the public conversation and the rights of people to make their voices heard." "We will continue to advocate to end destructive government-led shutdowns," the spokesperson said.

There were also concerns that internet access nationwide was being blocked. An alert on Twitter by London-based internet monitoring service NetBlocks said the country was in the midst of a "national-scale internet blackout."

"Network data show a collapse of connectivity to 16% of ordinary levels from 2 pm local time. The information blackout is likely to severely limit coverage of anti-coup protests," the tweet said.

On Friday, university teachers and staff across the country joined a civil disobedience campaign by wearing red ribbons to work, following a move initiated by medical doctors and health care staff on Thursday.

The campaign was also joined by other staff from some government ministries, according to local reports.

Meanwhile, state media reported Saturday that Foreign Minister Wunna Maung Lwin held an online meeting with the diplomatic corps of about 40 countries, including Japan, the previous day. He reiterated that there was large-scale fraud in the general election held in November and that the coup was justified, according to the report.

At the meeting, he explained that there was no change in diplomatic policy so far and called for the "understanding and support of the international community and constructive cooperation."

The military, which declared a one-year state of emergency after seizing power and ending a decade of civilian rule in the country, is believed to be detaining Suu Kyi and other NLD members in the capital Naypyitaw.

On Friday in New York, the U.N. special envoy on Myanmar strongly denounced the coup and called for the release of government officials, the spokesman for U.N. Secretary General Antonio Guterres said at a press conference.

Telephone talks between Christine Schraner Burgener and the Myanmar military's deputy commander-in-chief So Win were held from Wednesday night into Thursday, becoming the first contact between the United Nations and the country's military since the coup.

The U.N. envoy "reiterated the secretary general's strong condemnation of the military's action that disrupted the democratic reforms that were taking place in the country," the spokesman said.