Japanese citizens and opposition parties as well as major Olympic sponsors on Thursday viewed as "natural" and "too late" the planned resignation of Tokyo Olympic organizing committee chief Yoshiro Mori over his recent sexist remarks.

Some also said people in Japan should take the resignation of Mori, an 83-year-old former prime minister, as an opportunity to promote gender equality in an otherwise male-dominated society. 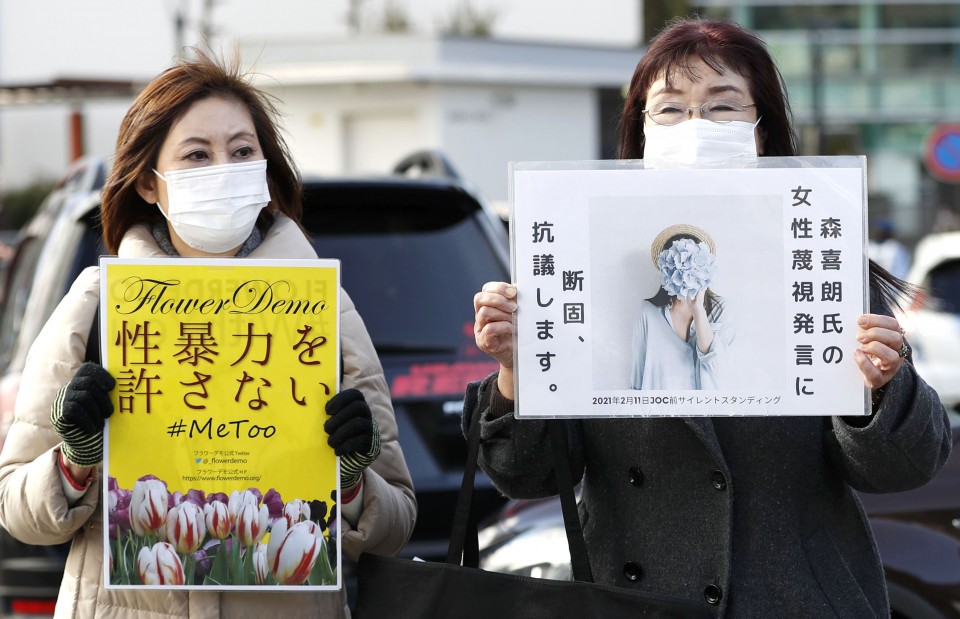 Women take part in a demonstration in Saitama near Tokyo on Feb. 11, 2021 as part of the nationwide Flower Demo movement, which has claimed the eradication of sexual assaults. (Kyodo)

Yuko Inazawa, the first female board member of the Japan Rugby Football Union who was a target of Mori's controversial remarks, said gender issues will not be addressed solely by his resignation, which he will announce Friday.

"We, as the sporting community, would like to think of the meaning of the Olympic Charter," which says any form of discrimination is incompatible with belonging to the Olympic Movement, Inazawa said.

Shizue Noda, an anti-sexual assault advocate, said Mori's remarks about women talking too much, which have drawn backlash at home and abroad, "trampled on the human rights of women and are absolutely unforgivable."

During a demonstration the 73-year-old organized in Saitama city near Tokyo as part of the nationwide Flower Demo movement, which calls for the eradication of sexual assaults, a 17-year-old high school student said he was disappointed by Mori's remarks and lawmakers who defended him.

"I would like to speak up so as not to inherit discrimination against women to our generation," said the student.

Meanwhile, an official of one of the sponsor companies said the resignation "is only natural and the timing is too late."

"We are extremely disappointed and feel betrayed because we have sponsored the games in empathy with the concept of a festival of peace," said the official.

Referring to 84-year-old Saburo Kawabuchi, a former head of the Japan Football Association who is certain to be tapped as Mori's successor, an official of another sponsor said it would be better that a woman takes the post.

Constitutional Democratic Party of Japan leader Yukio Edano said in an online meeting with local assembly members of his party that Mori's expected resignation would come "too late," but it was "better than not resigning."

Despite calls for Mori to step down, Suga and other lawmakers of the ruling Liberal Democratic Party as well as its junior coalition partner Komeito have not joined the move, although they admitted the remarks were inappropriate.

The head of the opposition Social Democratic Party, Mizuho Fukushima, said Mori's planned resignation "is the result of many women and others raising their voices."

Echoing such a view, Yuji Nakamura, a professor of sports administration at Utsunomiya University, said, "The problem is not only about Mr. Mori. Those who could not speak out carry the blame as well."

"The government and the sporting world must seriously reflect on their attitude toward gender equality," Nakamura said.

Some sport association officials voiced concerns about waning momentum toward the Olympics and Paralympics, while others expressed regret over Mori's planned departure due to his leadership in preparations for the games.

Shigeki Nishiguchi, a senior member of the Japan Wrestling Federation, said, "We are always concerned whether we will be supported even when (the Olympics) are held."

Shoken Narita, head of the Japan Canoe Federation, said he was shocked to hear the news, adding, "(Mori) is versed in all aspects and paid attention to the details."