Japan to receive 2nd shipment of Pfizer vaccine on Feb. 21

Japan will receive its second shipment of Pfizer Inc.'s COVID-19 vaccine on Sunday, the minister in charge of vaccination efforts said Friday, as the rollout gradually expands to hospitals across the country.

Taro Kono said at a press conference the shipment of up to 452,790 doses is set to arrive after the European Union gave approval under its new vaccine export controls.

Japan, which received its first shipment of up to 386,100 doses from Pfizer's factory in Belgium last week, launched its vaccination program on Wednesday for an initial group of 40,000 health care workers, which first started in the Tokyo metropolitan area. 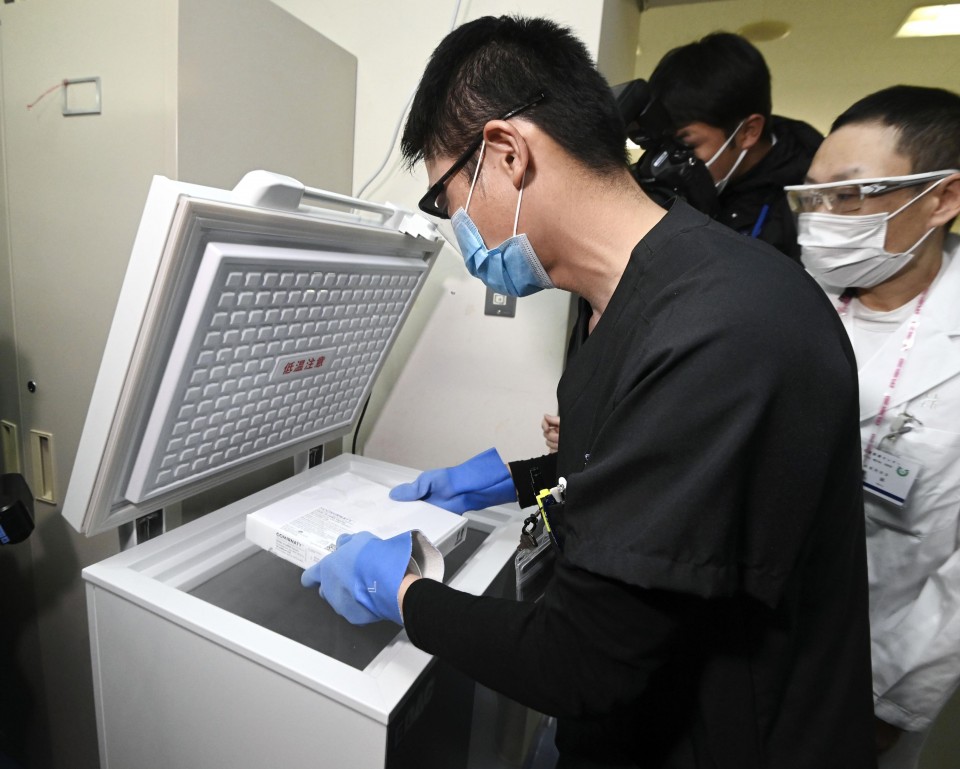 A box containing coronavirus vaccine developed by Pfizer Inc. of the United States is put into an ultracold freezer at the National Hospital Organization's Nagoya Medical Center in Nagoya, central Japan, on Feb. 18, 2021. (Kyodo)

The Ministry of Health, Labor and Welfare said 611 people had been inoculated at 16 medical facilities as of 5 p.m. Thursday, with no reports of severe allergic reactions, also known as anaphylaxis, or deaths after shots were administered.

Hospitals in more than a dozen prefectures including Niigata, Osaka and Kumamoto began vaccinations on Friday, with the rollout expected to expand to 100 hospitals by next week.

Asked by a reporter whether Japan has enough low dead space syringes to yield six doses from the two shipments, Kono said the country has sufficient stock but officials are still working out the logistics of distributing them to municipalities. Typical syringes widely available in the country can only extract five doses per vial.

The administrative and regulatory reform minister declined to say when he is expecting the third shipment to arrive.

Of the 40,000 health care workers, 20,000 are taking part in a study to track potential side effects caused by the vaccine, keeping daily records for seven weeks after receiving the first of two shots. The shots will be administered three weeks apart.

Kono said Thursday night on a TV program that the next group in line to be vaccinated from March -- front-line health care workers across the country -- had grown from the initial estimate of 3.7 million to 4.7 million.

People aged 65 or older, a group of about 36 million, will begin being inoculated from April, followed by people with preexisting conditions and those working at elderly care facilities, then finally the general population, according to the schedule set by the health ministry.

Many municipalities plan to set up large-scale vaccination sites in auditoriums and gymnasiums to quickly and efficiently inoculate residents.

But as some parts of the country lack such facilities, the government plans to offer state-owned office buildings and apartments for civil servants that are currently vacant for municipalities to utilize, officials said. Some are already being used to conduct polymerase chain reaction, or PCR, tests.