An annual ceremony was held in western Japan on Monday to push the country's claim to Takeshima, a group of islets controlled by South Korea, but on a smaller scale due to the coronavirus pandemic.

The ceremony in Matsue has been held every Feb. 22 since 2006 after the Shimane prefectural government designated the day as "Takeshima Day" in 2005, a century after a Cabinet decision was issued placing the islets in the Sea of Japan under the prefecture's jurisdiction. 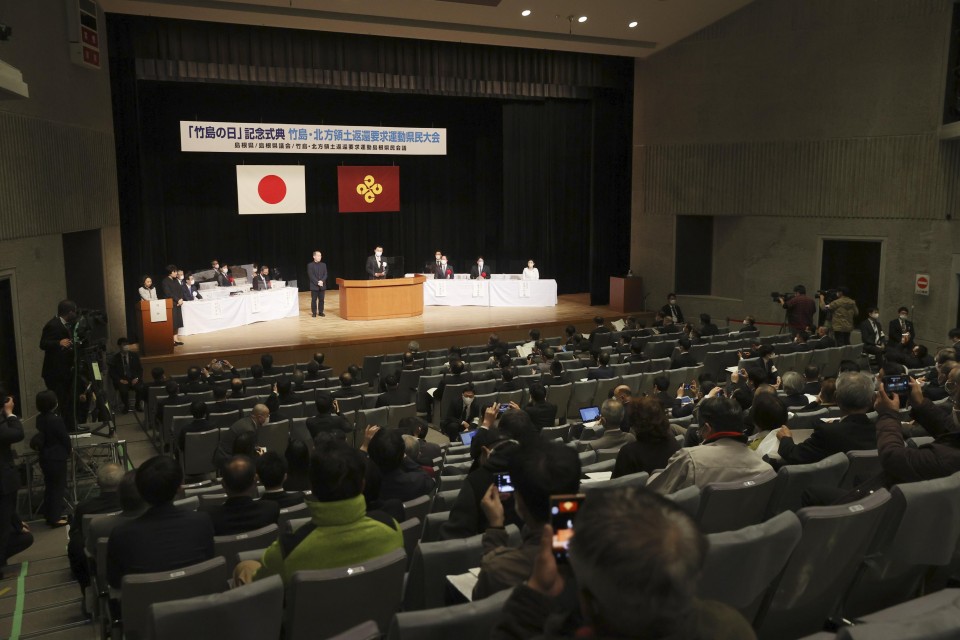 The islets, called Dokdo in South Korea, cover a total land area of 0.2 square kilometer and lie northwest of Shimane Prefecture's coast. They consist of volcanic rock with little vegetation or drinking water but are located in rich fishing grounds.

South Korea has stationed security personnel on the islets, located roughly 200 kilometers from either country, since 1954 and taken effective control of them.

At a press conference in Tokyo, Japan's top government spokesman, chief Cabinet secretary Katsunobu Kato, stressed the islets are "an inherent part of the territory of Japan in light of historical facts and based on international law."

Referring to the attendance of Japanese officials at the ceremony, South Korea's Foreign Ministry said in a statement it is a "useless" provocation over the islets and should be stopped immediately. 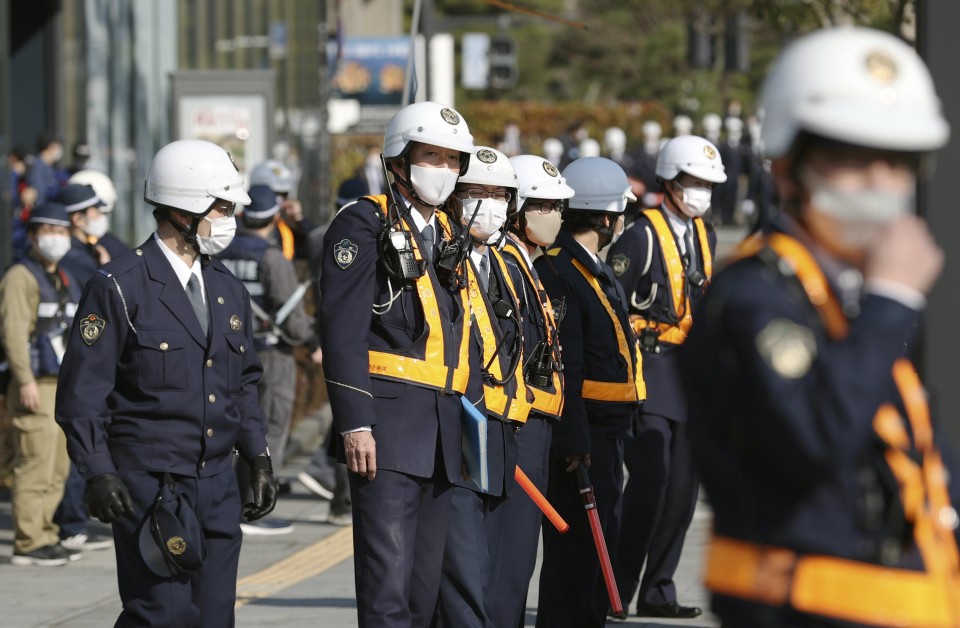 Police officers stand guard near the venue of the "Takeshima Day" ceremony in Matsue in Shimane Prefecture, western Japan, on Feb. 22, 2021. The ceremony is held annually to highlight Japan's claim of sovereignty over the South Korean-administered Sea of Japan islets, called Takeshima by Japan and Dokdo by South Korea. (Kyodo) ==Kyodo

"Dokdo is historically, geographically, and under international standards, clearly our territory, meaning that the Japanese government must stop making unfair claims right away and face history with a humble stance," the ministry said.

This year's ceremony was limited to some 220 participants, about half the number in previous years, to prevent the spread of the coronavirus.

Police set up barricades to head off right-wing activists who set up nearby to give speeches arguing Japanese ownership of the islets.

The annual event came as tensions simmer between the neighboring Asian countries over compensation issues related to Japan's 1910-1945 colonial rule of the Korean Peninsula.

Last month, a South Korean court ordered the Japanese government to pay damages to a group of former "comfort women" over their treatment in Japanese military brothels.

Japan argues that all claims related to Japan's colonial rule including the issue of comfort women were settled under the 1965 bilateral agreement.

While the governments of the two countries acknowledge that their separate 2015 agreement to "finally and irreversibly" solve the comfort women issue stands, Seoul says it has neither the right nor the authority to prevent the victims themselves from raising concerns.

The central government has dispatched a Cabinet Office parliamentary vice minister to the Takeshima ceremony for nine straight years to signal its position on the territorial row.