The U.S. government said Tuesday that it has determined Myanmar's military takeover constitutes a coup, an assessment triggering certain restrictions on foreign assistance as well as a "broader review" of aid programs to the Southeast Asian country.

"After a careful review of the facts and circumstances, we have assessed that Aung San Suu Kyi, the leader of Burma's ruling party and Win Myint, the duly elected head of government, were deposed in a military coup on Feb. 1," a senior State Department official said.

The coup determination will put restrictions on U.S. foreign assistance for the Myanmar government. The United States provided nearly $135 million in bilateral assistance to Myanmar in fiscal 2020, of which "only a very small portion" went to the government, the department said. 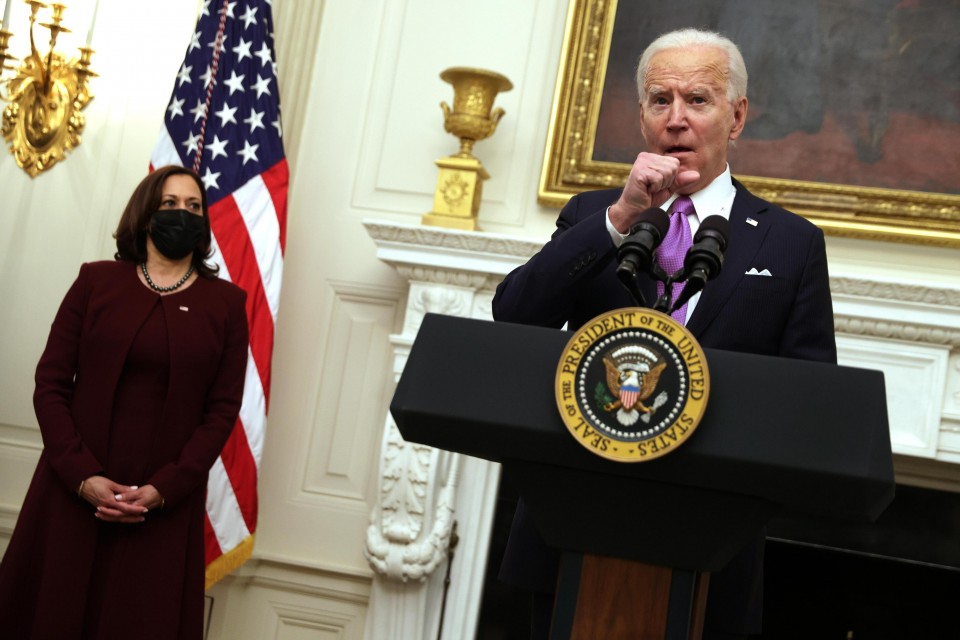 U.S. President Joe Biden during an event at the White House in Washington on Jan. 21, 2021. (Getty/Kyodo)

The United States will also conduct a review of all of its assistance programs for Myanmar, but programs that benefit the people directly, including humanitarian assistance to the Rohingya Muslims and other populations in need, will continue.

President Joe Biden has mentioned the possibility of re-imposing sanctions on Myanmar after its military seized power Monday and detained Suu Kyi and other government leaders, reversing the country's democratization less than a decade after its transition to civilian rule.

The Myanmar situation is emerging as the first major diplomatic test for Biden, who is seeking to restore Washington's traditional standing as a beacon of human rights and democracy.

Under the two-term Barack Obama administration through January 2017, the United States removed a range of economic and financial sanctions on Myanmar particularly after Suu Kyi's National League for Democracy won the 2015 elections.

But concerns remain that isolating Myanmar through fresh sanctions could push it toward dependence on China, whose influence is growing in the region.

Chinese Foreign Ministry spokesman Wang Wenbin said at press conference Tuesday that Beijing is a "friendly neighbor of Myanmar" and emphasized that any actions taken by the international community should avoid "complicating the situation."

The United States is having daily conversations with countries including Japan, known for its friendly ties with Myanmar, to address the situation, according to the State Department.

"We certainly appreciate that some other countries have better contacts with Burmese military than we do. So we're continuing those conversations," the senior department official said during a conference call.

The department's spokesman Ned Price told a separate press conference that there have been no specific conversations with the Chinese government on the issue to announce and that Washington is "focused on like-minded allies and partners" in responding to the coup.

The United States has not been able to talk to Suu Kyi or members of the National League for Democracy, with many of the senior officials believed to be under house arrest, the department said.

ANALYSIS: With coup, Myanmar risks isolation it escaped decade ago