Reigning champions Kawasaki Frontale overpowered Yokohama F Marinos 2-0 on Friday as the 2021 J-League season kicked off under the shadow of the coronavirus pandemic.

Veteran midfielder Akihiro Ienaga starred with a pair of first-half goals at Kawasaki's Todoroki Stadium, where entry was limited to a maximum of 5,000 spectators under emergency rules put in place by the government to curb infections.

A state of emergency will remain in place for the Tokyo metropolitan area until March 7, impacting several clubs in the first division, which has swelled to 20 teams after the league suspended relegation last year because of the virus. 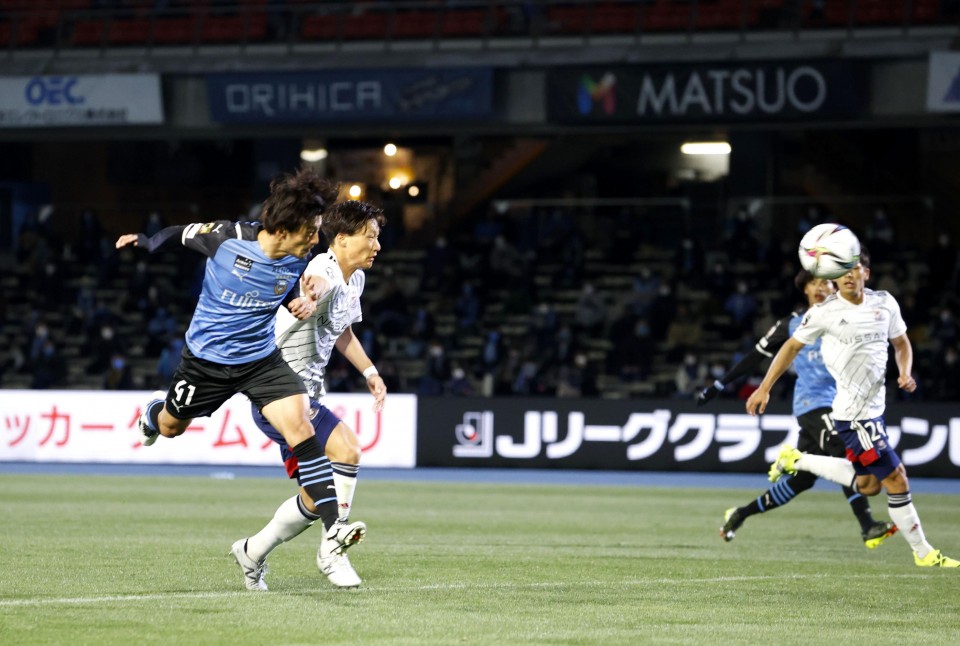 Kawasaki Frontale's Akihiro Ienaga (L) scores his second goal with a header in the first half of J-League football's season-opening match against Yokohama F Marinos at Todoroki Stadium in Kawasaki, Japan, on Feb. 26, 2021. (Kyodo)

Toru Oniki's side -- who ran away with the 2020 title race following a roughly four-month interruption to the season -- looked to pick up where they left off in the curtain raiser against 2019 champions Marinos.

The hosts dominated early and were only kept from scoring in the 12th minute by the quick reflexes of Marinos keeper Powell Obinna Obi, who stopped Kaoru Mitoma from close range after Leandro Damiao provided a through ball in tight space.

Ienaga volleyed home the opener in the 21st minute, finishing an outstanding buildup from the champions.

Following a one-two pass with Ao Tanaka on the right wing, Yasuto Wakizaka floated a cross into the area for a flying Miki Yamane, who teed up Ienaga in front of goal with a back-heel.

Ienaga missed a golden opportunity to score his brace in the 32nd minute, firing over the bar after Damiao found him in front of an open goal.

But the 2018 J-League MVP doubled the lead in the 43rd minute after Kawasaki regained possession in their attacking half, with Tanaka providing a cross for Ienaga to head in from close range.

Ange Postecoglou's men did a better job taking the fight to Kawasaki in the second half and were almost rewarded on a counterattack in the 63rd minute when Ado Onaiwu hit the post.

But the night well and truly belonged to the reigning champions, who showed they will once again be a force to be reckoned with as they pursue a fourth J1 crown in five seasons.

"We were able to execute some of the things we've been working on in practice. It worked out well," Ienaga said. "We have expectations of winning the title, and we want to do everything we can to achieve that goal."

The league has retained a maximum of five substitutes per game this season after increasing it from the usual three per game to help combat injury during the heavily condensed schedule last year.

It has also introduced an additional substitution for players suspected of sustaining a head injury after a team has used all five substitutes.

With four clubs set to be relegated to the second division at the end of the season, controlling the spread of the coronavirus has taken on increased importance this year.

If a team cannot field the minimum required 13 healthy players for a match, which subsequently cannot be rescheduled, they face having the fixture recorded as "played" and their opponents credited with a 3-0 win.

A number of clubs will also have to start the season minus foreign players and staff currently being kept out of the country by entry restrictions imposed under the state of emergency.