The Nikkei index ended sharply lower Friday, logging its biggest point drop since June 2016, as a spike in the yields of U.S. and Japanese long-term bonds triggered concern about market stability and possible changes to monetary easing.

The U.S. dollar moved around the 106 yen line, caught in a tug of war between buying on rising U.S. interest rates and selling over market instability concerns triggered by sharp falls in Tokyo stocks, dealers said. 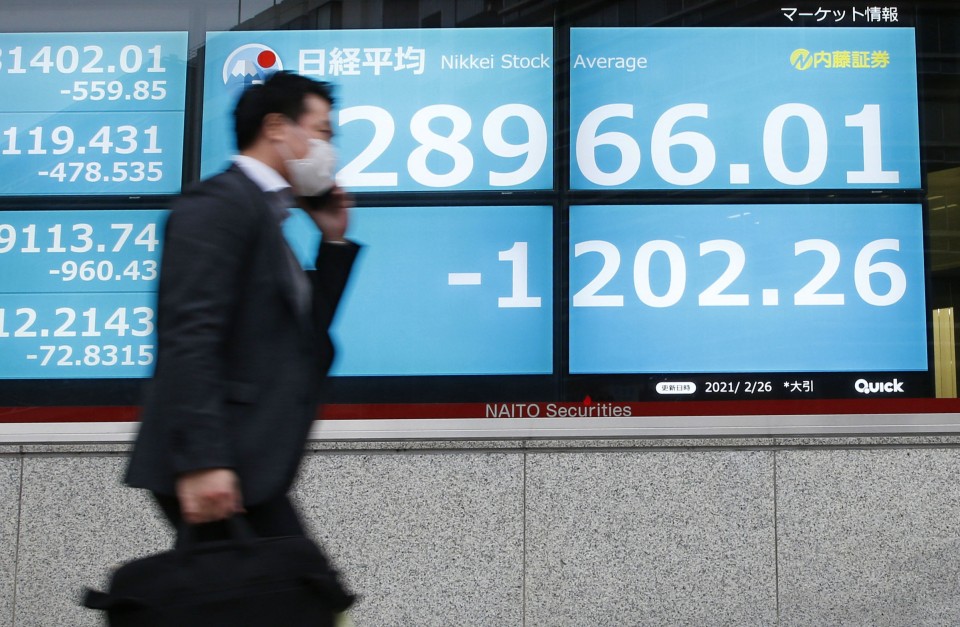 The bond yield closed at its highest level since Jan. 29, 2016, when the Bank of Japan decided to adopt a negative interest rate.

Tokyo shares lost ground throughout the day, with the Nikkei logging its largest fall since June 24, 2016, when it tumbled 1,286.33 points as Britain voted to exit from the European Union in a historic referendum.

"Both U.S. and Japanese interest rates rose too rapidly and companies that have been overvalued such as those related to high-tech, digitalization and stay-at-home demands met selling," said Toshikazu Horiuchi, equity strategist at IwaiCosmo Securities Co.

Although U.S. Federal Reserve Chairman Jerome Powell has signaled in congressional testimony that the central bank will keep its accommodative policy in place for some time, investors remained cautious, brokers said.

"Since share prices had risen on the back of massive monetary easing and fiscal spending, (the sharp fall in Tokyo stocks) cooled off excessive expectations," said Yutaka Miura, senior technical analyst at Mizuho Securities Co., adding stocks in other countries similarly declined.

Miura said the Nikkei may remain volatile until the Federal Reserve's two-day policy meeting through March 17, fluctuating by up to 600 points between positive and negative territory even within a day. The Bank of Japan will also hold a two-day Policy Board meeting from March 18.

Horiuchi said the market is expected to regain its bullish tone if traders perceive the rise in interest rates as reflecting global economic recovery, because if so, business improvement would follow.

"With more people getting vaccinated and infection cases decreasing, the market is expected to lean toward optimism," Horiuchi said.

The Nikkei extended losses toward the closing of the day's session as investors locked in gains before the end of the week as well as the month, Horiuchi said.

On the First Section, declining issues outnumbered advancers 1,985 to 172, while 37 ended unchanged. Decliners were led by electric appliance, pulp and paper, and real estate issues.

Real estate issues were sold on fears that rising interest rates would increase their interest-bearing liabilities and hurt earnings.