Japan's economy contracted 4.8 percent in real terms in 2020 from the previous year, the second sharpest contraction on record, reflecting the impact of the novel coronavirus pandemic, government data showed Monday.

Real gross domestic product, the total value of goods and services produced in a country adjusted for inflation, marked the first decrease since it shrank 5.7 percent in 2009, the largest contraction since data began to be compiled in 1955, according to the preliminary figures released by the Cabinet Office.

The negative growth in 2009 was logged in the wake of the global financial crisis. 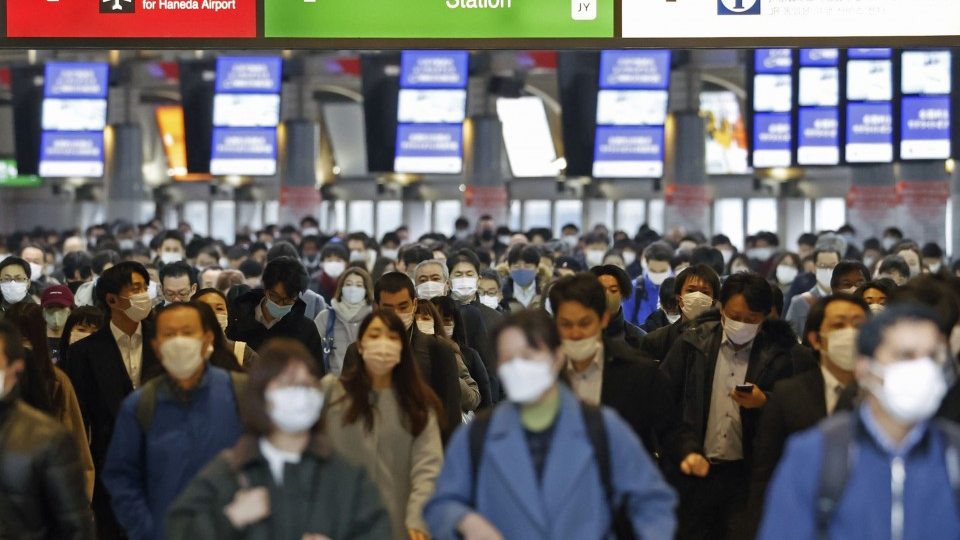 Last year, private consumption, which accounts for more than half of Japan's GDP, fell 5.9 percent mainly due to stay-home requests under the government's spring nationwide state of emergency over the virus.

Many major cities abroad entered hard lockdowns, dampening demand for products such as cars and reducing Japan's exports by 12.3 percent.

On a quarterly basis, meanwhile, GDP in the October-December period grew a real 3.0 percent, or an annualized 12.7 percent, from the previous quarter as the world's third-largest economy continued to experience a strong recovery from its pandemic-induced slump.

Quarterly growth was far ahead of the average projection by private-sector economists of an annualized 7.97 percent expansion.

Following an annualized 22.7 percent jump in the previous three-month term, GDP grew by a double-digit percentage for the second straight quarter, after the virus emergency caused it to shrink an annualized 29.3 percent in the April-June period, the largest on record.

Economic revitalization minister Yasutoshi Nishimura said in a statement the 2020 GDP figure reflected "the very severe situation," while the October-December outcome suggested a "bottoming out and the potential resilience of Japan's economy."

Looking forward, many analysts predict Japan will post negative growth in the January-March period again, as Tokyo and nine other of the nation's 47 prefectures are currently under a second state of emergency amid a third wave of virus infections.

The emergency, which Prime Minister Yoshihide Suga declared last month, is expected to end on March 7.

Imports fell 6.8 percent, mitigating the GDP contraction to some extent. The decrease reflected a fall in the price of energy resources such as crude oil and liquefied natural gas.

For the October-December period, economic growth was driven by an 11.1 percent leap in exports on the back of a firm recovery in the global economy, as well as a 2.2 percent rise in private consumption supported by government measures including a subsidy campaign to boost the virus-hit domestic tourism sector.

The annualized size of real GDP for the reporting quarter was 542.69 trillion yen, regaining over 90 percent of the decline from the same year's January-March period to the second quarter.

"Japan's economy saw the worst contraction in the second quarter but recovered faster than expected in the third and fourth quarters, which led to the milder shrinkage than 2009 on an annual basis," said Shinichiro Kobayashi, a senior economist at Mitsubishi UFJ Research and Consulting Co.

"At the time of the global financial crisis, it took time for (the Japanese economy) to get over the recession as the financial system itself was scarred and couldn't supply funds. But this time, economic activity was stopped (due to the virus) and therefore it was relatively easy to reboot the economy," he said.

However, Kobayashi said he could not evaluate economic growth in the latter half of 2020 favorably because it resulted from the government's policy to prioritize reviving the economy over curbing the virus spread, which led to the ongoing emergency and is expected to cause a negative growth again.

In nominal terms, or unadjusted for price changes, the economy shrank 3.9 percent in the reporting year, but expanded an annualized 10.5 percent, or 2.5 percent quarterly, in October-December.

The Cabinet Office is scheduled to release revised annual and quarterly GDP data on March 9.