The Japanese government approved Friday a bill to resolve the issue of the long-term detention of foreign nationals facing deportation orders, allowing asylum seekers to be released and giving protection to those not qualified for refugee status under the country's strict standards.

The bill to revise the immigration law came in response to criticism that the detention of foreign nationals spanning six months or longer was a violation of their human rights. The government aims to have the legislation enacted during the current ordinary Diet session through June.

Under the current immigration law, the only way for foreign nationals to get out of detention at immigration centers is via a provisional release. 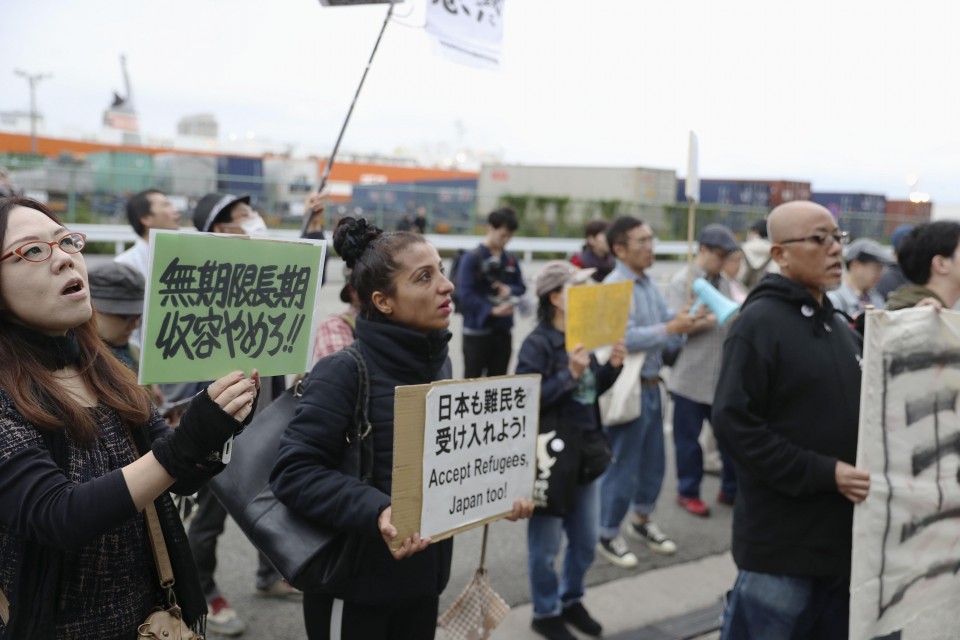 The bill sets up a mechanism called "supervisory measures" under which detainees are released upon paying a deposit of up to 3 million yen ($28,000) and their supporters, designated by the immigration authorities, are required to monitor their situation and report back to them.

Those who go missing following their release can be hit with up to a one-year jail term or a 200,000 yen fine.

The immigration authorities will examine individual cases and decide who can be subject to the envisioned supervisory measures. Those seeking refugee status or in pending lawsuits associated with their application are expected to be entitled to them.

The legislation also creates a scheme to protect "quasi-refugees" who do not meet conditions for the Japanese government to grant asylum but who cannot return to their country due to civil war or other reasons.

Japan has been criticized by the U.N. High Commissioner for Refugees for accepting less than 1 percent of refugee applications.

The country began reviewing its detention rules following the death in June 2019 of a Nigerian man in his 40s who went on a hunger strike to protest his prolonged detention at an immigration center in the southwestern prefecture of Nagasaki.

As of January 2020, there were around 82,000 foreigners illegally overstaying in Japan. Some 10,000 repatriate annually after receiving deportation orders but about 3,000 stay in the country, making repeated applications to be recognized as refugees as deportation procedures are automatically halted for asylum seekers.

The bill limits the number of times the deportation procedure can be halted while applying for refugee status to two. It also enables authorities to order those facing deportation to apply for passports for repatriation and impose penalties for noncompliance.

Those who voluntarily repatriate at their own expense could return to Japan in principle in one year, instead of the current five years. 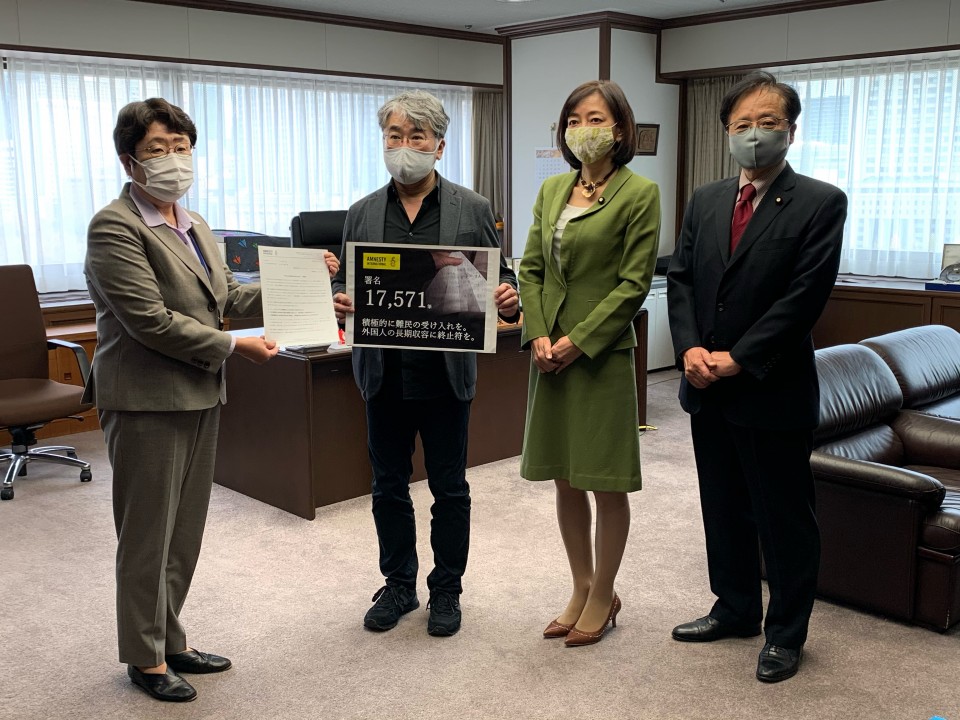 Amnesty International Japan submits a petition to Shoko Sasaki (far L), commissioner of the Immigration Services Agency of Japan, at the Justice Ministry in Tokyo on Dec. 9, 2020. (Kyodo)

Amnesty International Japan said in a statement that it has "strong concern" about the bill since it "does not quite fulfill" the international human rights standard.

The human rights organization said the bill also violates the principle of nonrefoulement and that it continues to maintain detention as a principle instead of being an exception or a last resort.

The organization also said that the bill does not set a limit to the detention period, something that had been criticized by U.N. agencies on several occasions.

The number of foreigners who refuse to follow deportation orders for such reasons as applying for refugee status and having family members who live in Japan has been on the rise.

As of late 2019, the number of noncompliant foreign nationals detained at 17 immigration centers across Japan for six months or longer stood at 462, up from 290 at the end of 2014.

The figure fell to 232 in June last year as authorities increased the number of those provisionally released to prevent cluster coronavirus infections at the detention facilities.

Among those foreign detainees, the number of people staying at immigration centers for three years or longer jumped from four at the end of 2014 to 63 in late 2019.

In 2019, Japan granted refugee status to 44 people and allowed 37 people to reside without guaranteeing such status. The country received 10,375 applications that year.