President Joe Biden's trade representative pick Katherine Tai on Thursday vowed to work with U.S. allies to address what Washington views as China's unfair economic practices, but was cautious about an early return to a vast Pacific trade agreement the United States left four years ago.

Noting her past career as chief enforcer against China's unfair trade practices at the U.S. Trade Representative Office, Tai said at a Senate confirmation hearing that she knows the critical importance of having a "strategic and coherent plan for holding China accountable to its promises and effectively competing with its model of state-directed economics." 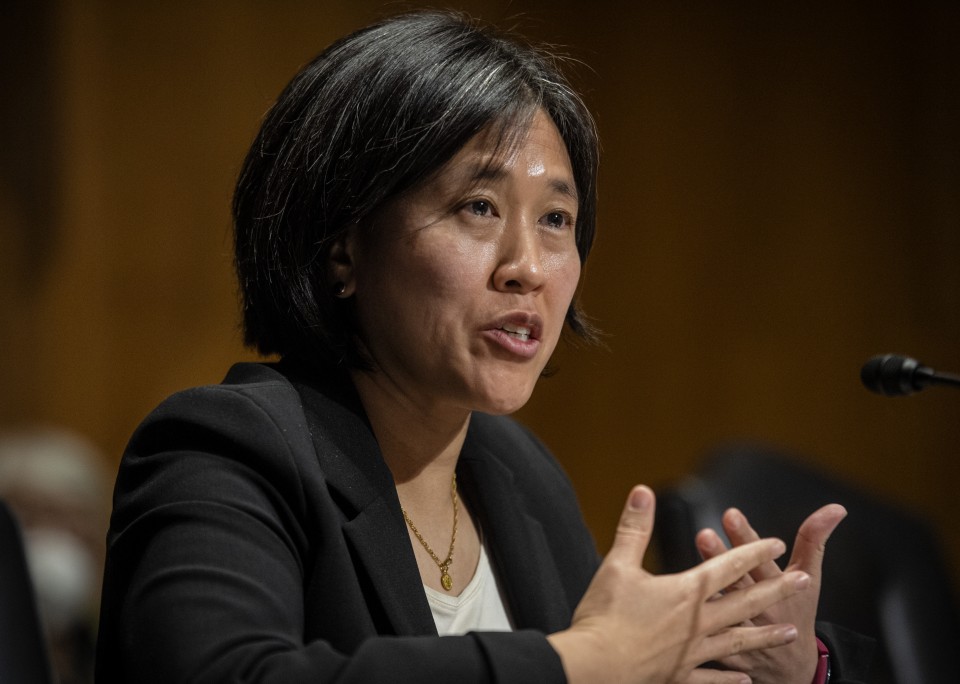 Katherine Tai speaks during the Senate Finance committee hearings to examine her nomination to be United States Trade Representative in Washington on Feb. 25, 2021 (Pool/Getty/Kyodo)

"And I know how important it is to build what the president has termed 'a united front of U.S. allies,'" she said.

Her remarks signal a desire to shift away from the previous administration's go-it-alone approach under Donald Trump, which critics say has alienated allies and undermined an effective global response to China.

Tai also said she will work to enforce the so-called U.S.-China phase one trade agreement, under which Beijing agreed to beef up purchases of U.S. products, strengthen intellectual property protections and address allegations of forced technology transfer.

"There are promises that China made that China needs to deliver on," the trade expert said before the Senate Committee on Finance, referring to the deal signed in January last year following a tit-for-tat tariff war between the world's two largest economies.

Tai, meanwhile, indicated cautiousness as to whether the United States should work toward a quick return to the Trans-Pacific Partnership free trade deal, from which Trump withdrew the country shortly after taking office in 2017 over concerns about potential U.S. job losses.

"Even today in 2021, the basic formula of TPP, which was to work with our partners with whom we have very important shared interests economically and strategically, and with the challenge of China in mind, is still a sound formula," she said, but added that "a lot has changed in the world in the past five or six years" since it was negotiated.

The TPP, originally signed by 12 Asia-Pacific countries in 2016, has widely been seen as a counterweight against China's growing economic clout in the region. Following the U.S. withdrawal, Japan and the other 10 remaining members including Australia moved to salvage most of the deal, now called the Comprehensive and Progressive Agreement for Trans-Pacific Partnership.

Biden, formerly vice president under Barack Obama who championed the TPP, suggested prior to his election as president that joining the CPTPP would require renegotiation in some areas.

The Biden administration has also indicated that its initial focus will be on investment in American competitiveness at home rather than negotiating any new trade deals.

Tai, born to Chinese parents who grew up in Taiwan, has been tapped by Biden to become the first Asian American and first woman of color to lead the USTR office. The post requires Senate confirmation.