Shinkansen bullet train services between Tokyo and northeastern Japan resumed Wednesday, 11 days after they were disrupted due to a powerful earthquake that hit the Tohoku region.

The Tohoku Shinkansen bullet train line connected the capital with the region for the first time since the magnitude-7.3 temblor on Feb. 13 damaged electricity poles and bridges in some areas along the line. 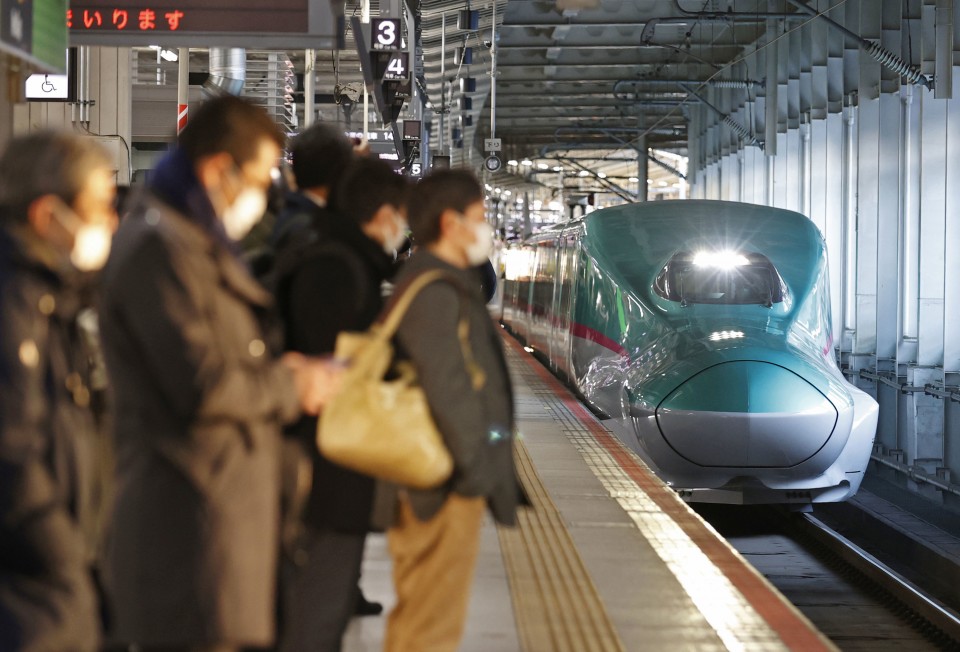 A Tohoku Shinkansen bullet train bound for Tokyo arrives at a platform of JR Sendai Station on Feb. 24, 2021. (Kyodo)

Its operator East Japan Railway Co. said the total number of high-speed trains on the line will initially be limited to about 80 percent of the pre-quake level with services expected to return to normal in about a month.

Since the trains have to slow down on sections of the track that were recently repaired, the journey from Tokyo to northeastern Japan's Sendai or Morioka station will take about an hour longer than normal.

Some services on the line have since resumed, with bus, airplane and local railway operations offering passengers alternative transportation services.

Around 40 people lined up at the Sendai Station ticket office before it began operations Wednesday morning.

"I was afraid I could not take a shinkansen train (due to congestion) so I began waiting in a line around 5 a.m.," said Kiyotaka Saito, 59, who works in Sendai and was heading to his home in Tokyo. "Since I was unable to return home for a while because of the quake, I'd like to do some domestic chores."

The Feb. 13 quake caused injuries to more than 180 people in 10 prefectures of northeastern and eastern Japan, according to the Fire and Disaster Management Agency.

It also caused power and water outages across a wide area and damaged over 2,600 houses across Fukushima, Miyagi and Yamagata prefectures, the agency said.

While a tsunami did not occur, the earthquake came just weeks before the 10th anniversary of the magnitude-9.0 quake and tsunami that devastated northeastern Japan in March 2011, leaving around 16,000 people dead and triggering the Fukushima nuclear crisis.