Japan plans to bring forward the lifting of the coronavirus state of emergency to Sunday for Osaka, Kyoto and four other prefectures given a falling number of infections there, government officials said.

Prime Minister Yoshihide Suga, meanwhile, is considering maintaining the state of emergency in Tokyo and three adjacent prefectures until its current end date of March 7, the officials said Wednesday.

The government is likely to make decisions about the six prefectures -- Osaka, Kyoto, Hyogo, Aichi, Fukuoka and Gifu -- and the four others, Tokyo, Kanagawa, Chiba and Saitama, after holding a meeting with a panel of infectious disease and other experts on Friday. 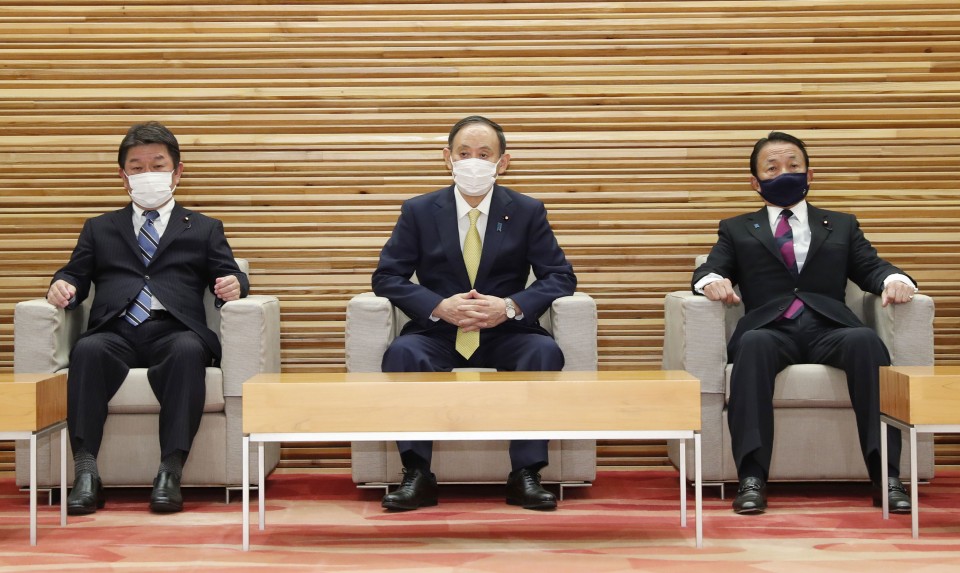 "We will hold a meeting on Friday to hear various opinions from experts and make a judgment," Suga said after talks with health minister Norihisa Tamura and Yasutoshi Nishimura, the minister in charge of the pandemic response, on Wednesday.

"It's true that the number of infections has been falling sharply and there are requests from governors for an earlier-than-scheduled end (to the state of emergency)," he told reporters at the prime minister's office.

Suga also said the government will start COVID-19 vaccinations for the elderly on April 12, as the rollout gradually expands beyond health care workers.

Earlier in the day, a health ministry advisory panel acknowledged that infections were declining nationwide but warned against complacency.

The capital saw 213 new infections on Wednesday, bringing the number of novel coronavirus cases to date to 110,400. The seven-day rolling average of new cases in Tokyo fell below 300 on the same day for the first time since November.

Tokyo's tally for Wednesday compared with 127 in Chiba, 93 in Kanagawa and 62 in Osaka.

Since Suga declared the state of emergency on Jan. 7, people have been urged to refrain from unnecessarily leaving their homes, while restaurants and bars are being asked to close by 8 p.m.

Businesses are encouraged to adopt remote working while attendances at large events such as concerts and sports have been capped at 5,000.

While the measures are more lax than last spring's state of emergency, which saw schools close nationwide and many businesses temporarily shuttered, some government officials are wary of restricting economic activity for too long.

Meanwhile, others are worried that lifting the declaration too soon could lead to a resurgence of infections.

The health ministry panel said infections had fallen under the state of emergency but that the pace of decline had slowed from mid-February, and that continued efforts were needed to bring the pandemic under control. Hospitals remain under pressure but not to the extent they were previously, it said.

Nishimura told a parliamentary committee on Wednesday the government would make a decision based on the advice of experts while making sure to prevent the coronavirus from spreading again in the coming months.

The governors of Kyoto, Osaka and Hyogo on Tuesday made a joint request to Nishimura for their prefectures to be taken off the list.

Aichi Gov. Hideaki Omura also made a similar request, while Gifu Gov. Hajime Furuta has indicated the state of emergency should be lifted in his prefecture at the same time as Aichi.

On Wednesday, Fukuoka also asked for the southwestern prefecture to be removed from the list before March 7.

Suga initially declared a state of emergency for one month to Feb. 7 for the Tokyo metropolitan area before expanding it to a total of 11 prefectures. The declaration was later extended to March 7 except for Tochigi.