As public anger toward Tokyo Olympics chief Yoshiro Mori's sexist remarks continues unabated, critics have pointed out how they have exposed the lack of progress made so far in eliminating entrenched discrimination against women in Japan.

"Mr. Mori has been gaffe-prone, but this remark should not be attributed to his character. This is a problem of how decisions are made in Japan and how men in power are biased," Kiriu Minashita, a sociology and gender studies professor at Kokugakuin University, said of the 83-year-old former prime minister. 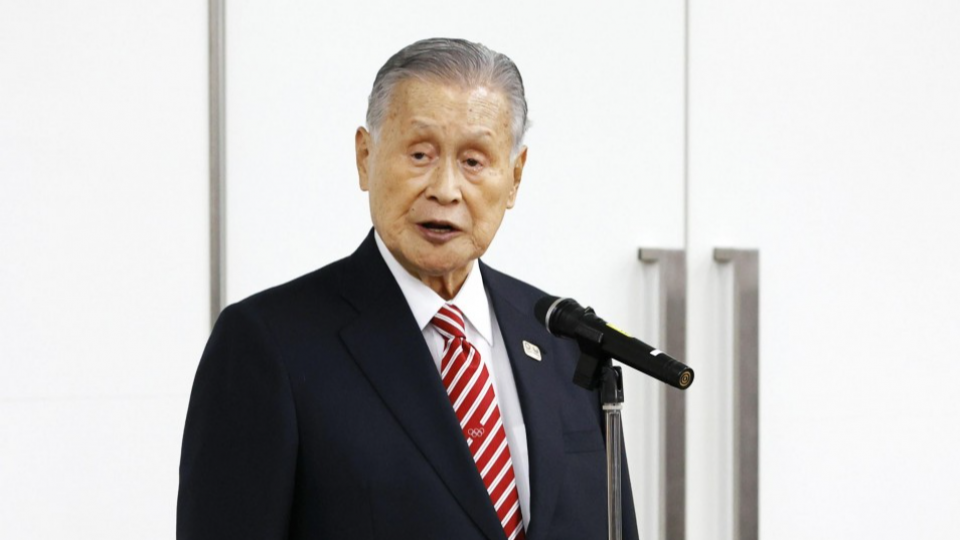 Yoshiro Mori, president of the Tokyo Olympic organizing committee, meets the press in Tokyo on Feb. 4, 2021. The former Japanese prime minister apologized for remarks he made that have been widely criticized as sexist, but insisted he will not resign. (Kyodo)

"We should not only seek (Mori's) resignation but also correct the background that generated his remarks," Minashita said.

Mori sparked the sexism row in a gathering of the Japanese Olympic Committee last week, when he said women tend to talk too much in meetings as they have "a strong sense of rivalry."

At the same time, he said the seven women currently sitting on the 35-member board of the Tokyo Olympic organizing committee "understand their place," in remarks apparently meant to praise them by exempting them from his criticism.

He later retracted the comments and apologized but insisted he will not resign despite mounting calls for his removal.

Japan consistently ranks poorly in the World Economic Forum's gender gap rankings, coming 121st out of 153 countries in 2020 and occupying last place among major advanced economies. Women made up only 5.2 percent of executives at all listed Japanese companies as of 2019, according to government data.

The government set a goal in 2003 of filling around 30 percent of leadership positions in the country with women by 2020, but failed to meet the target as the issue was sidelined by other political and economic initiatives. The date was then pushed back to "as soon as possible within the 2020s."

Aono said Mori has failed to "update" his values from the division of labor by gender, in which men earn a living and women focus on domestic and care duties.

Older men who can be out of touch with changing social values often occupy powerful positions in traditional Japanese companies because of the system of promotion based on the length of service, he said.

According to experts, that same system can also be a major obstacle to women taking up leadership roles.

With many companies still valuing long working hours, women tend to lag behind their male colleagues in terms of careers or promotions if they take time off for childrearing, they say.

In 2018, Tokyo Medical University and several other schools were found to have been deducting entrance exam scores for female applicants. The schools' explanation was that, believing female doctors tend to resign or take long periods of leave after getting married or giving birth, they were acting to prevent a shortage of doctors at affiliated hospitals.

Even some corporate executives who address gender gaps in their businesses are not free from unconscious bias, said Nana Otsuki, executive director at online securities company Monex Inc.

"Many men do not disagree with the idea of women being active unless they become threats to them," said Otsuki, who also serves as an outside director for listed Japanese companies. "It is important for co-workers to genuinely acknowledge the accomplishments of female workers when they become board candidates."

The gender balance in the Japanese political realm is also far from being equal. The proportion of female lawmakers in the lower house stood at 9.9 percent last October, ranking 167th out of 190 countries, according to the Geneva-based Inter-Parliamentary Union. In local assemblies nationwide, the figure was 14 percent in 2019, according to Ichikawa Fusae Center for Women and Governance.

After winning her first election in 2015, Niigata prefectural assembly member Mieko Akiyama, 70, said she noticed many of her male colleagues leaving the floor when she brought up themes such as child rearing and gender equality in her questions.

At first she hesitated to complain, but the fourth time, when about 10 members left, she protested.

"Not speaking out when you felt something is wrong means you accepted it," Akiyama said. "To achieve an agreement with diverse members does take time, but it is essential to make discussions more open."

"Policies regarding women such as separate surnames are going backward," Tajima said, referring to a failure by the Japanese government to include a commitment to allowing married couples to use different surnames in its basic gender equality promotion policy approved in December.

"Resolving political issues one by one is what makes women free," she said.

Tajima welcomes the uproar both in Japan and abroad over Mori's remarks, saying it will help the world become aware of how the country's society "ignores human rights."

"Japanese men are conscious of public image. When they feel embarrassed, then they can realize what a shame sexism is. Unless we create a society where talented women who speak out are appreciated, Japan will be marginalized and go into decline," she said.