Japan's travel surplus in 2020 shrank to nearly one-fifth of the previous year, the first drop since the balance turned into the black in 2015, as international travel bans amid the coronavirus pandemic had a huge impact on the number of inbound visitors, government data showed Monday.

The travel balance, which reflects the amount of money foreign visitors spend in Japan versus Japanese spending abroad, tumbled 79.2 percent to 562.1 billion yen ($5.3 billion) from a record 2.70 trillion yen in 2019 since annual comparable data became available in 1996, the Finance Ministry said in a preliminary report. 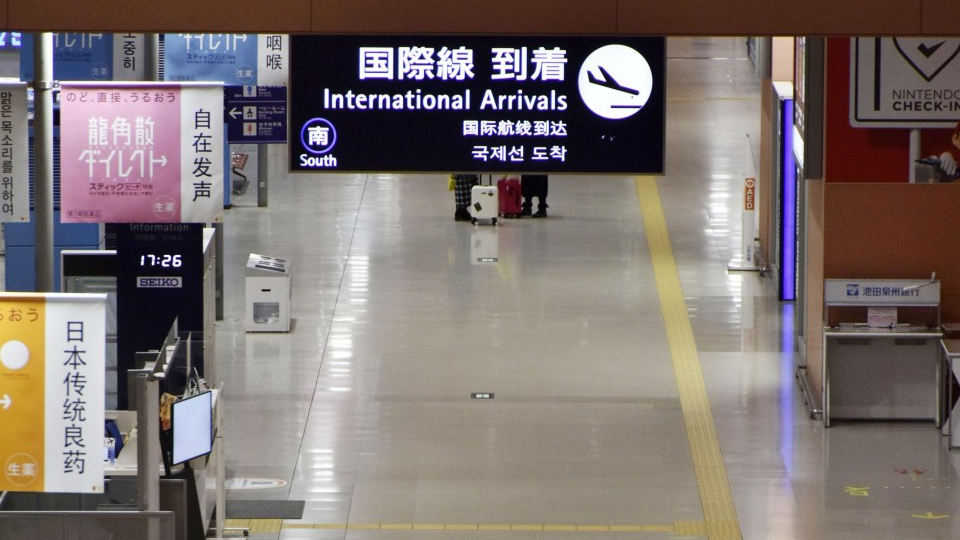 An arrival lobby for international flights at Kansai International Airport in Osaka Prefecture is deserted amid the novel coronavirus pandemic on Nov. 4, 2020. (Kyodo) ==Kyodo

Still, Japan's travel balance in 2020 logged black ink for the sixth straight year. In 2015, the balance saw its first black ink of 1.09 trillion yen since data compilation began in 1996, following a 44.4 billion yen deficit marked in 2014.

Since 2011, when a massive earthquake, tsunami and the subsequent Fukushima nuclear crisis in northeastern Japan helped slightly widen a travel deficit to 1.30 trillion yen, the country's annual travel balance had continued to improve until 2019 with a steady increase in the number of foreign visitors.

The reporting year's surplus in the current account, one of the widest gauges of international trade, fell 13.8 percent from 2019 to 17.70 trillion yen, its lowest level since 16.52 trillion yen recorded in 2015. It had increased 5.8 percent the previous year.

In 2020, the goods trade balance saw a surplus for the fifth consecutive year, jumping almost eight-fold from the previous year to 3.05 trillion yen.

The impact of a 15.0 percent decline in imports due to falls in prices of crude oil and other energy resources surpassed that of an 11.4 percent slip in exports amid sluggish demand for Japanese products such as cars and auto parts due to the pandemic.

With the poor performance of the travel balance, services trade, which also includes cargo shipping, marked a 3.54 trillion yen deficit, following the first-ever surplus of 124.8 billion yen in 2019. It was the biggest red ink since the 3.81 trillion yen logged in 2012.

The primary income balance, which reflects returns on overseas investments, showed a surplus of 20.72 trillion yen, the fourth largest since 1996, despite a 3.2 percent dip from a record 21.40 trillion yen in 2019, the first decline in four years.

Many countries have imposed sweeping travel restrictions in response to the global spread of infections after the virus was first detected in China in late 2019.

In 2020, 4.12 million foreigners visited Japan, which has promoted inbound tourism as a pillar of its growth strategy for revitalizing regional economies in recent years, plummeting a record 87.1 percent from 31.88 million in the previous year, according to the Japan Tourism Agency.

Japan was originally scheduled to host the Tokyo Olympic and Paralympic Games last summer, but they were postponed for a year amid the pandemic.

Largely consisting of tourists from China, South Korea and Taiwan, foreign visitors had kept expanding until 2019, when the figure hit a record high for the seventh year in a row.

In the month, the country had a goods trade surplus of 965.1 billion yen and a services trade deficit of 343.5 billion yen. Primary income registered a surplus of 649.2 billion yen.