In a rematch of their 2018 U.S. Open final, when Osaka became Japan's first Grand Slam singles winner, the third seed was broken in the first game but recovered emphatically to defeat 10th seed Williams 6-3, 6-4 at Rod Laver Arena before a small crowd.

Osaka will now face 22nd seed Jennifer Brady in the final after the American beat 25th seed Karolina Muchova of the Czech Republic 6-4, 3-6, 6-4 in the other semifinal. 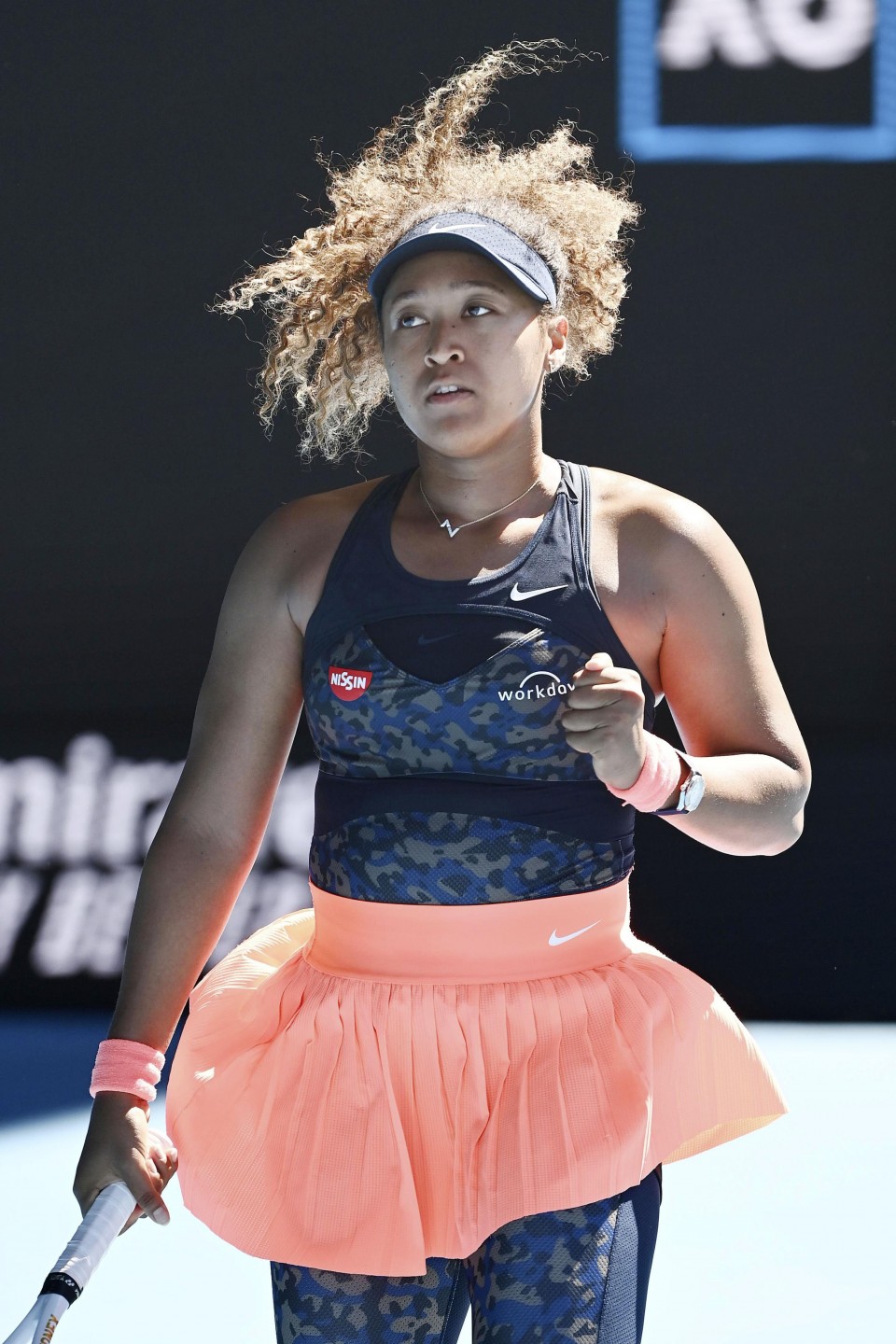 Naomi Osaka celebrates victory in a semifinal against Serena Williams during the Australian Open on Feb. 18, 2021, in Melbourne. (Getty/Kyodo)

Fans returned to the venue for the first time since Friday after the state of Victoria lifted its lockdown, put in place after a cluster of coronavirus infections was reported.

And Osaka had a smile on her face at the end of the match -- in sharp contrast to her tearful response after her 6-2, 6-4 win over Williams in the 2018 U.S. Open final. That match was marred by an umpiring controversy when Williams was handed a point penalty and then a game penalty for receiving coaching from her box and arguing with the umpire.

"Honestly, for me it's always an honor to play her and I just didn't want to go out really bad, so I just wanted to try my best," Osaka said. "I was a little kid watching her play and just to be on the court playing against her for me is a dream."

Osaka struggled with her first serves at the start, but so did Williams as the Japanese came back to even the first set 2-2. Osaka won two break points and sent a forehand winner for her second break to lead 4-2 and held her serve to take the set, amassing nine winners to Williams' four.

"I just had a lot of unforced errors in the first few games and I was just really nervous and scared at the beginning, and I sort of eased my way into it," she said. "For me the biggest thing is just having fun."

"It's very intimidating to serve for the first game and see her on the other side of the net...I was just telling myself to control what I can control and try to play within myself."

A crosscourt backhand winner gave Osaka a break to open the second set, and back-to-back aces in the next game saw her hold serve and cement her advantage.

Three double faults from Osaka threw her opponent a lifeline with a break, but the youngster won the next eight points to close it out. A double fault by Williams and three winners by Osaka resulted in a 40-0 service break before Osaka held serve for the win.

The 23-year-old Osaka, the winner of the 2019 Australian Open and 2020 U.S. Open, entered the match with a 2-1 record against the 39-year-old Williams. It was their second meeting at a grand slam.

"They definitely mean a lot. Every time I play her, I feel like it's something I definitely remember," Osaka said of Williams. "I want her to play forever. Well, that's the little kid in me, but yes."

With 23 career Grand Slam singles titles, Williams is one shy of Australian Margaret Court's record 24. Williams' last Grand Slam championship came in Melbourne in 2017. She gave birth to her daughter in September of that year.

Osaka, who hit 20 winners to Williams' 12, will face a first-time finalist in Brady. They last met in the 2020 U.S. Open semifinals when Osaka won in full sets en route to her third Grand Slam title. Osaka is 2-1 in her career against Brady.

"It (was) easily one of my most memorable matches I think, it was just super high quality throughout," Osaka recalled of the 7-6(1), 3-6, 6-3 win. "For me it's not really surprising at all to see her in another semis or another finals...it's definitely going to be really tough."

Osaka has won all three of the Grand Slam finals she has reached so far and promised the extra motivation she has for the stage will drive her to another big performance.

"I have this mentality that people don't remember the runners-up," she said. "I mean you might, but the winner's name is the one that's engraved. So I think I fight the hardest in the finals, and I think that's where you sort of set yourself apart."