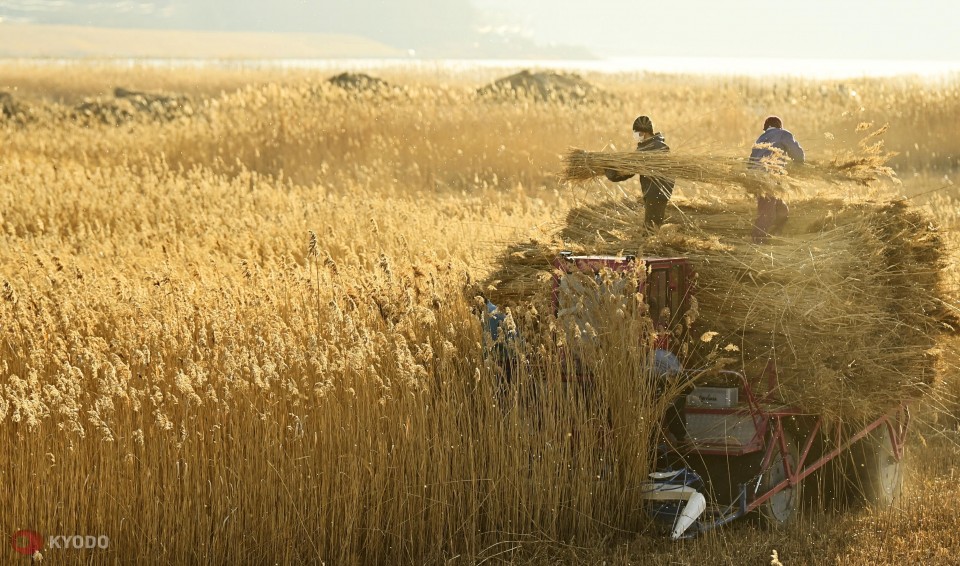 People cut reeds as high as 3 meters for roof thatching at the Kitakami River in Ishinomaki, northeastern Japan, on Feb. 13, 2021, around 10 years after an earthquake-triggered tsunami that flooded the area. Reeds have begun to grow again in around 60 percent of a 180-hectare area thanks to replanting by volunteers. (Kyodo) ==Kyodo 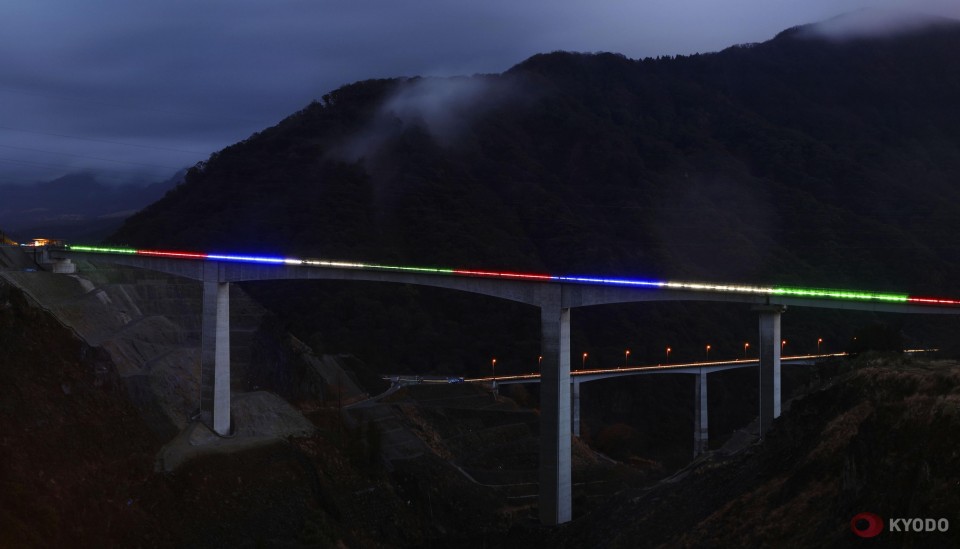 A 345-meter-long bridge in Minamiaso, now under construction to replace one that collapsed in strong earthquakes in the southwestern Japan prefecture of Kumamoto in 2016, is lit in red, green, white and blue on Feb. 13, 2021, ahead of its March 7 opening. (Kyodo) ==Kyodo 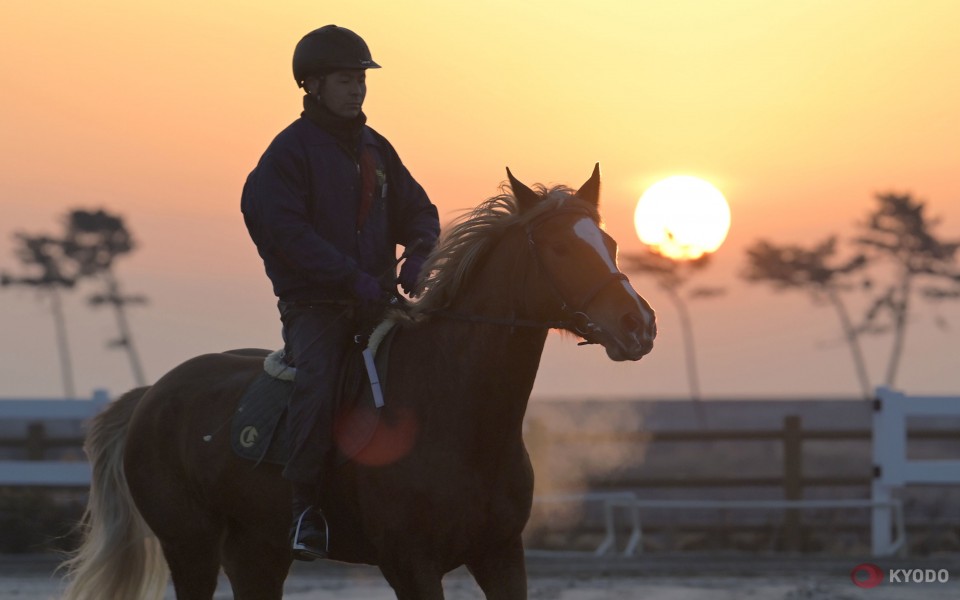 An 18-year-old horse that was rescued after being engulfed by the earthquake-triggered tsunami in March 2011 trains at a horseback riding ground in Sendai in Miyagi Prefecture, northeastern Japan, on Feb. 13, 2021, ahead of the 10th anniversary of the disaster. (Kyodo) ==Kyodo 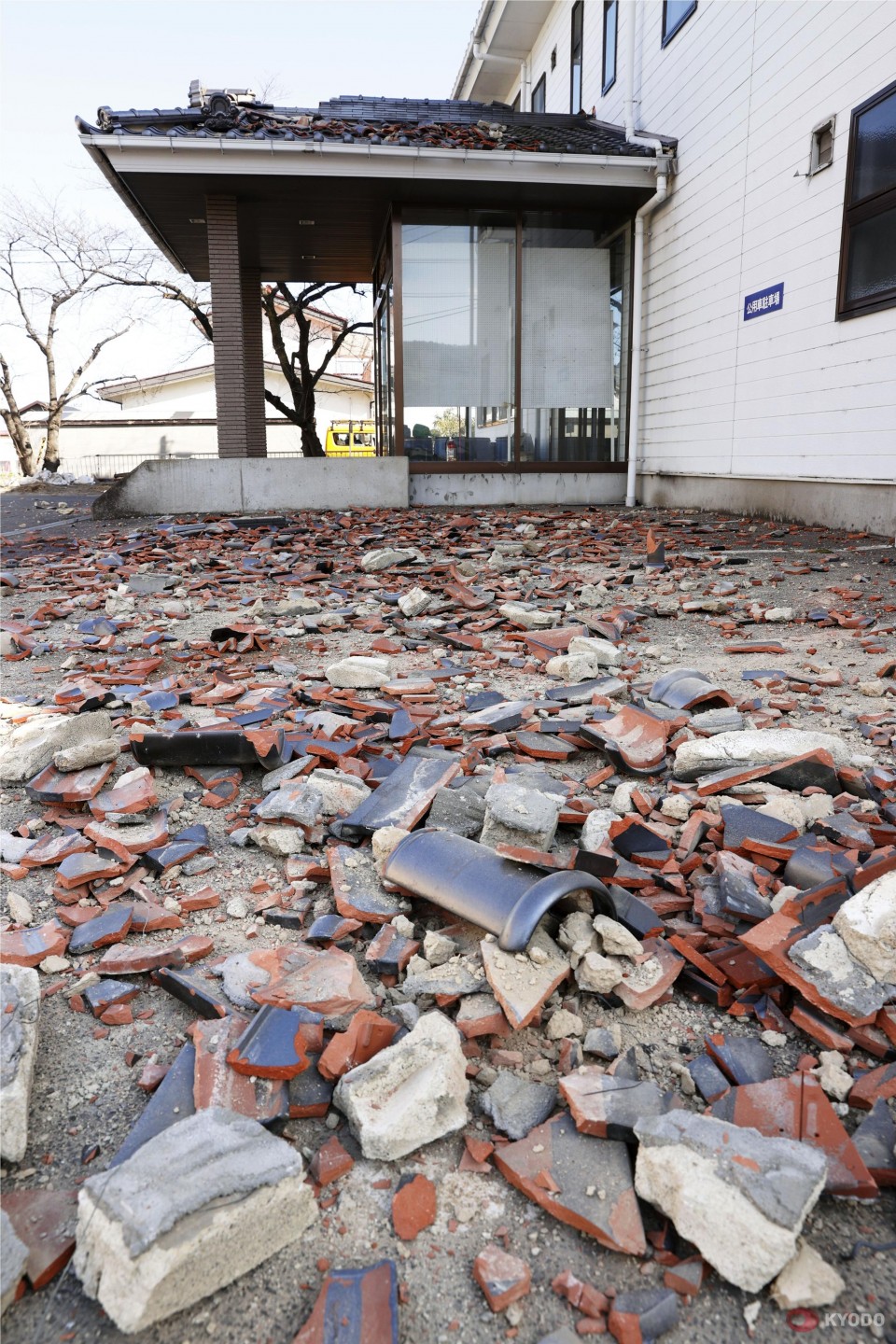 Photo taken Feb. 14, 2021, shows tiles that fell from the roof of a house in Koori, Fukushima Prefecture, after an earthquake with a magnitude of 7.3 struck northeastern Japan late on Feb. 13. (Kyodo) ==Kyodo 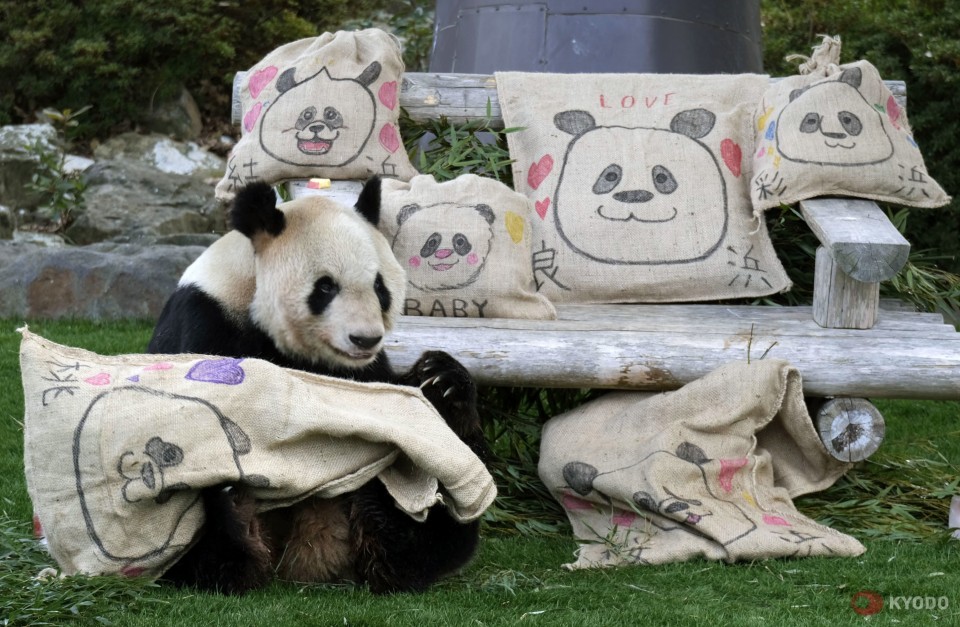 Giant panda Eimei plays with cushions given to him as Valentine's Day gifts at Adventure World amusement park in Shirahama in Wakayama Prefecture, western Japan, on Feb. 14, 2021. (Kyodo) ==Kyodo 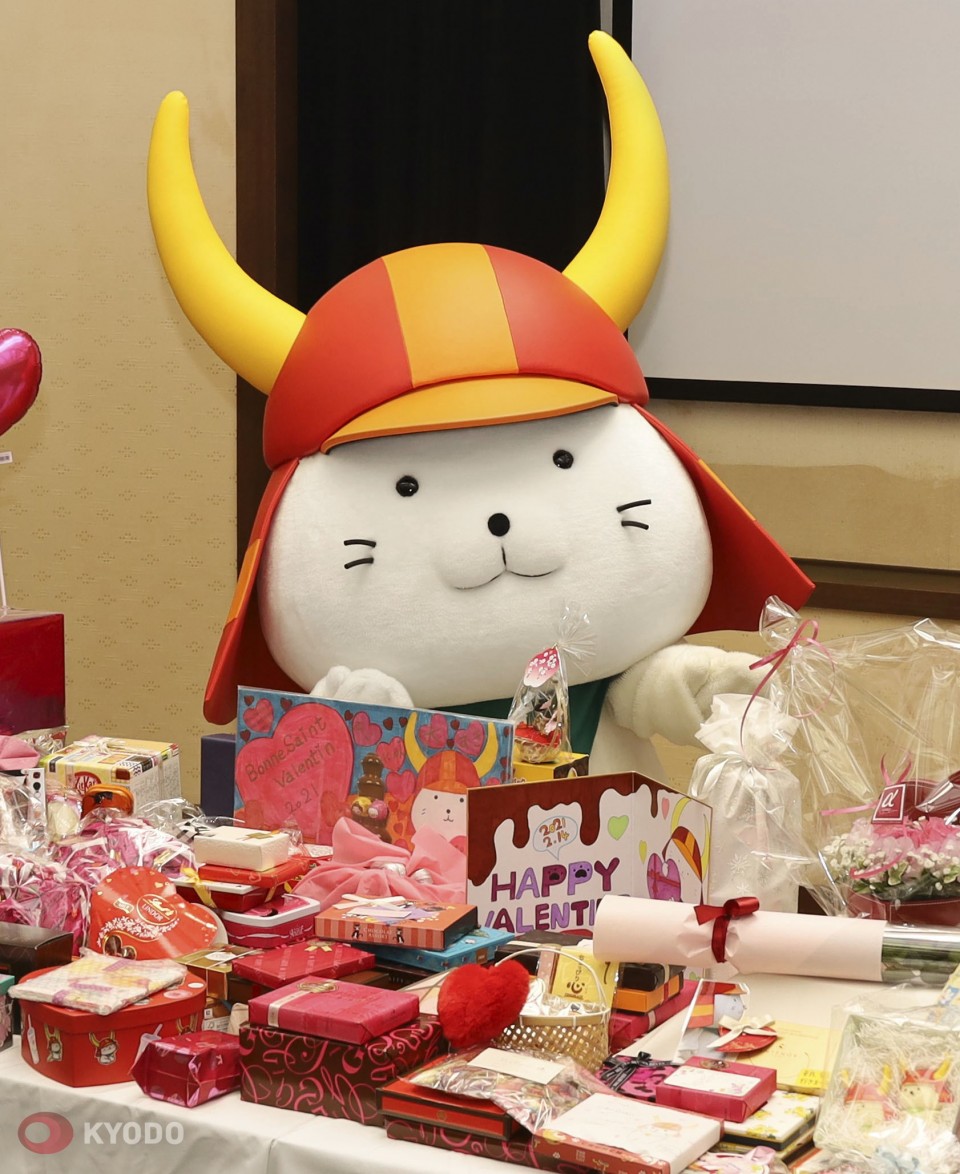 Hikonyan, the popular mascot of Hikone, Japan, poses with Valentine's Day gifts from fans across the country on Feb. 15, 2021, in the Shiga Prefecture city. (Kyodo) ==Kyodo 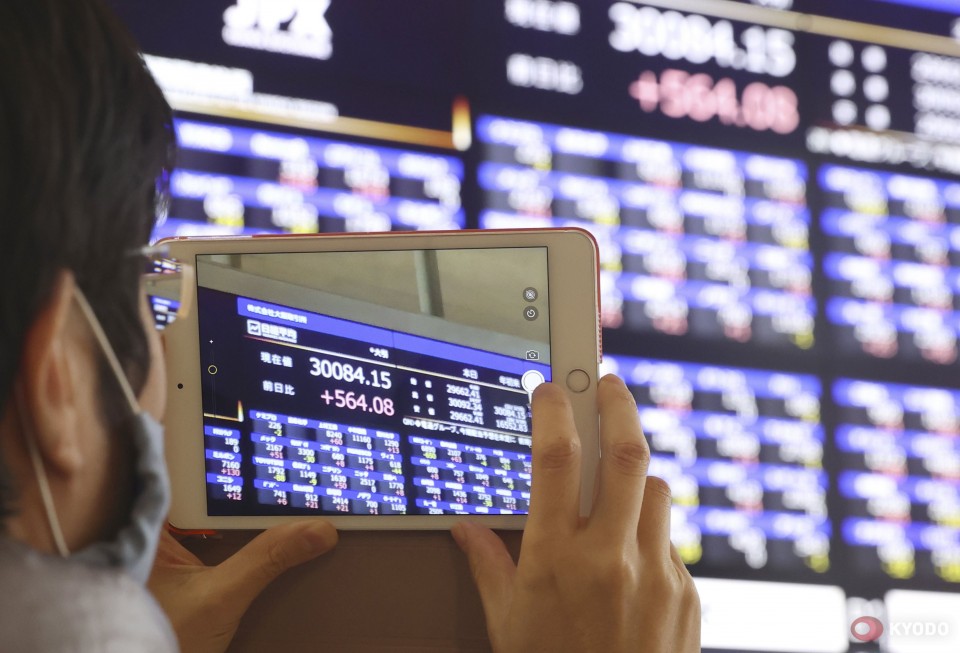 A man takes a photo of a financial data screen at the Osaka Exchange in Osaka on Feb. 15, 2021, as the display shows the 225-issue Nikkei Stock Average closing above the 30,000 mark for the first time in over 30 years. (Kyodo) ==Kyodo 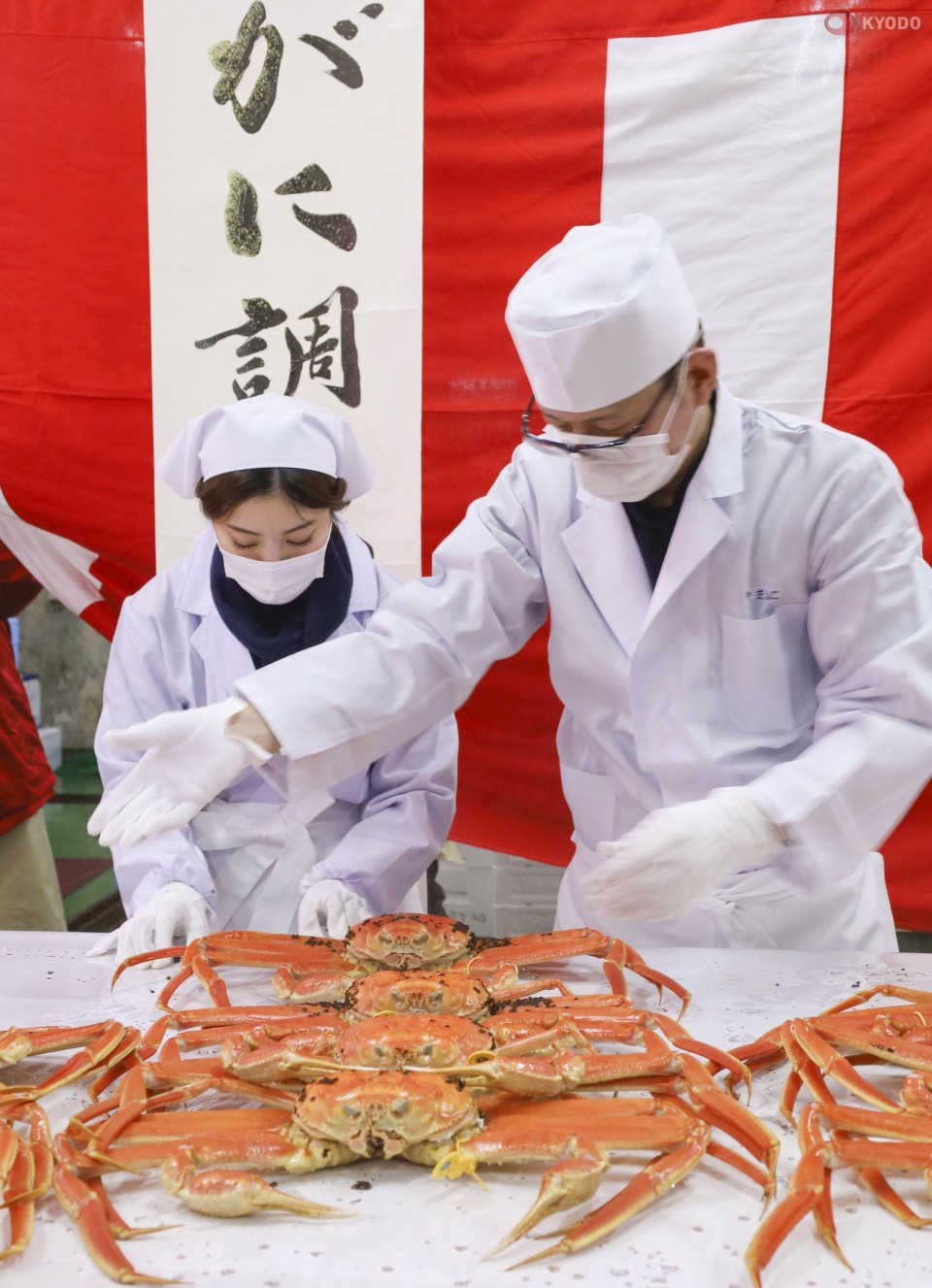 Echizen crabs, a winter specialty of the central Japan prefecture of Fukui, are boiled and prepared in the prefecture's Sakai city on Feb. 15, 2021, for presentation to the imperial family. (Kyodo) ==Kyodo 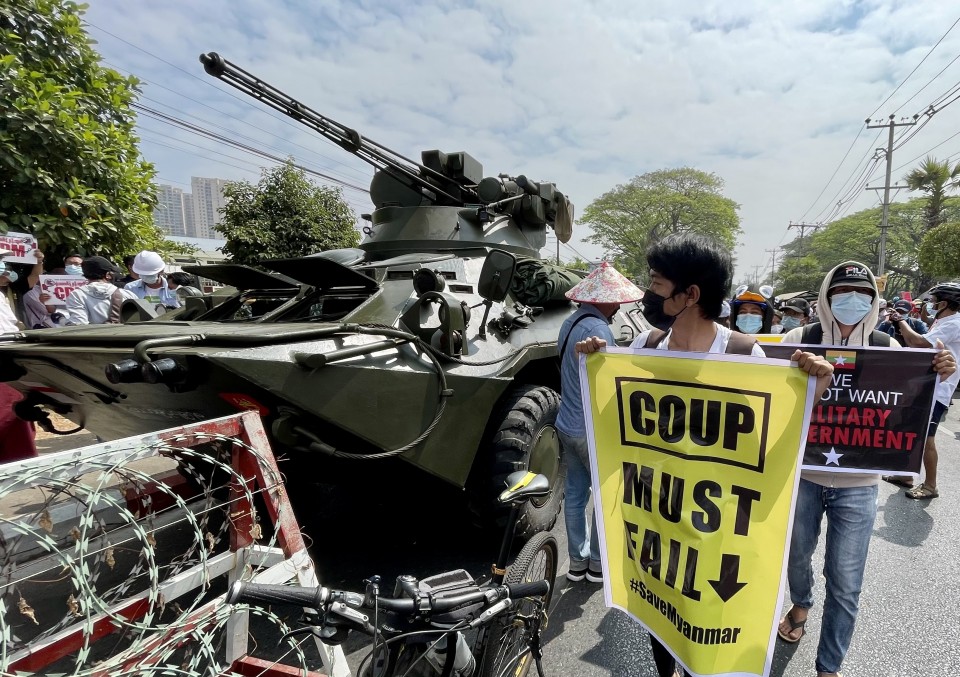 People protest in Yangon, Myanmar, on Feb. 15, 2021, against the military that has detained Aung San Suu Kyi and other government leaders since it staged a coup on Feb. 1. (Kyodo) ==Kyodo 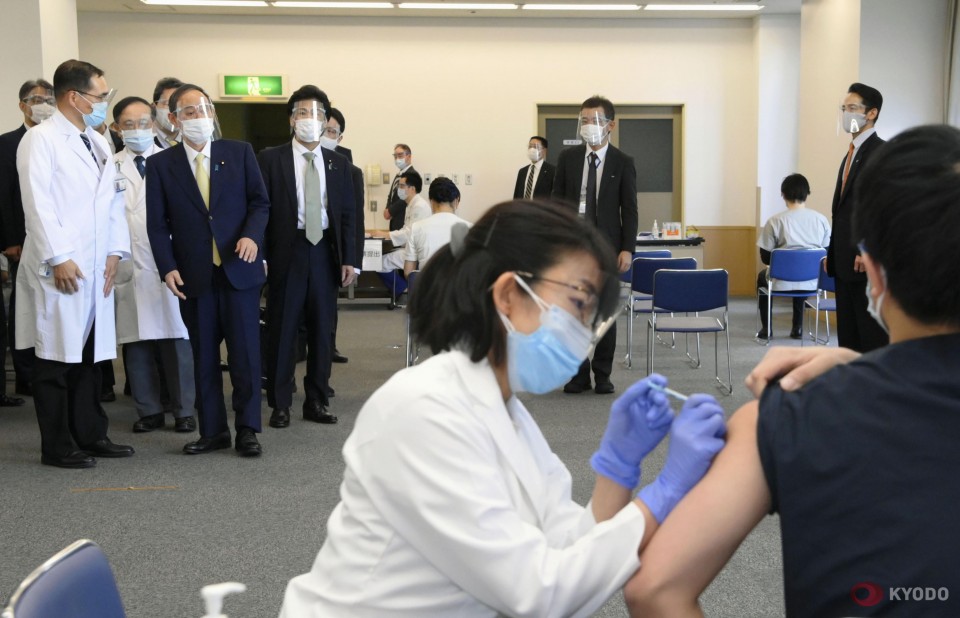 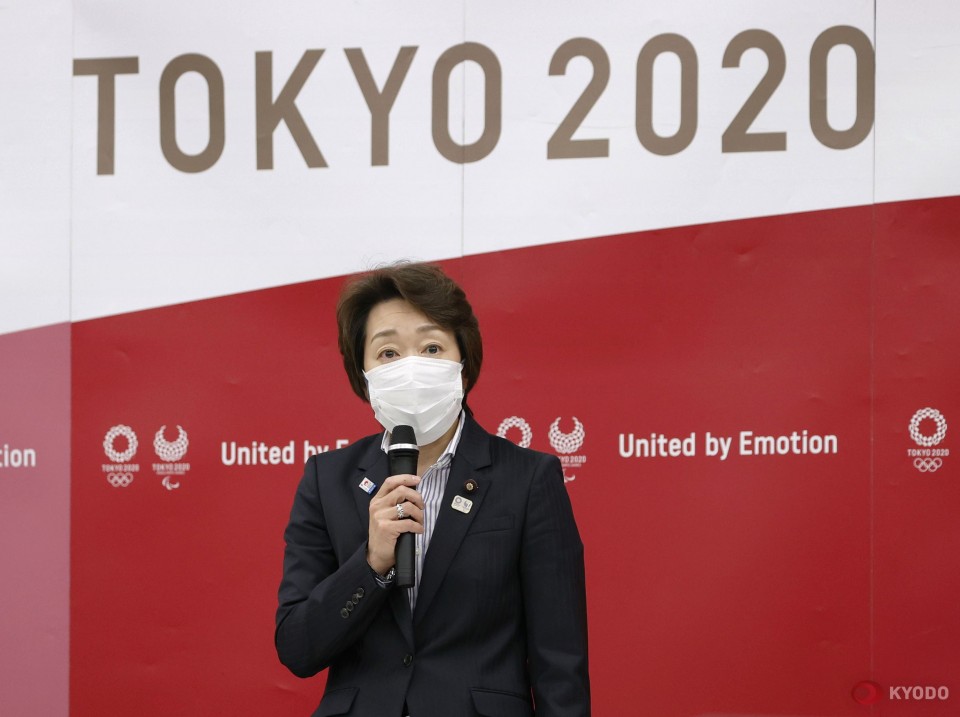 New Tokyo Olympic organizing committee head Seiko Hashimoto speaks during a meeting of the committee's executive board in Tokyo on Feb. 18, 2021, after its approval of her taking the post. The 56-year-old seven-time Olympian succeeded Yoshiro Mori who announced his resignation the previous week over sexist remarks. (Kyodo) ==Kyodo 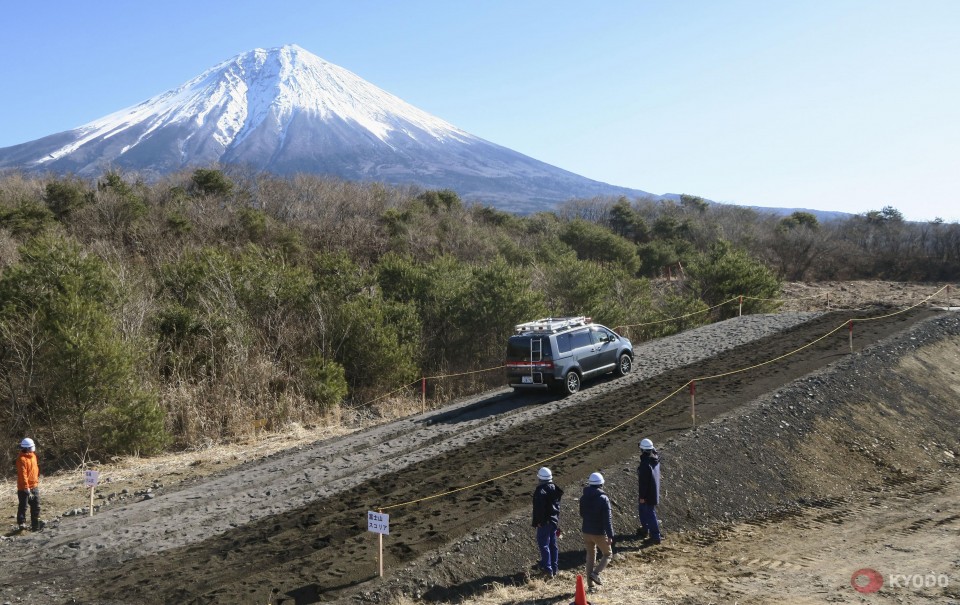 A regional unit of Japan's Ministry of Land, Infrastructure, Transport and Tourism conducts a test run of an emergency vehicle on volcanic ash near Mt. Fuji in Fujinomiya, Shizuoka Prefecture, on Feb. 19, 2021. (Kyodo) ==Kyodo
Copyright © 2021 Kyodo News All rights reserved.
No reproduction, republication or redistribution without written permission.