For the past decade, local governments in Japan's northeast have been striving to preserve sites memorializing the destruction left by the 2011 massive earthquake and tsunami to remind future generations of the importance of disaster preparedness.

But as the 10th anniversary of the disaster approaches on March 11, officials say maintaining the sites has become an increasing struggle amid public apathy and drops in both donations and paying visitors.

And with the decline in ticket sales particularly precipitous last year amid the novel coronavirus pandemic, some experts say it is time for the central government to step in. 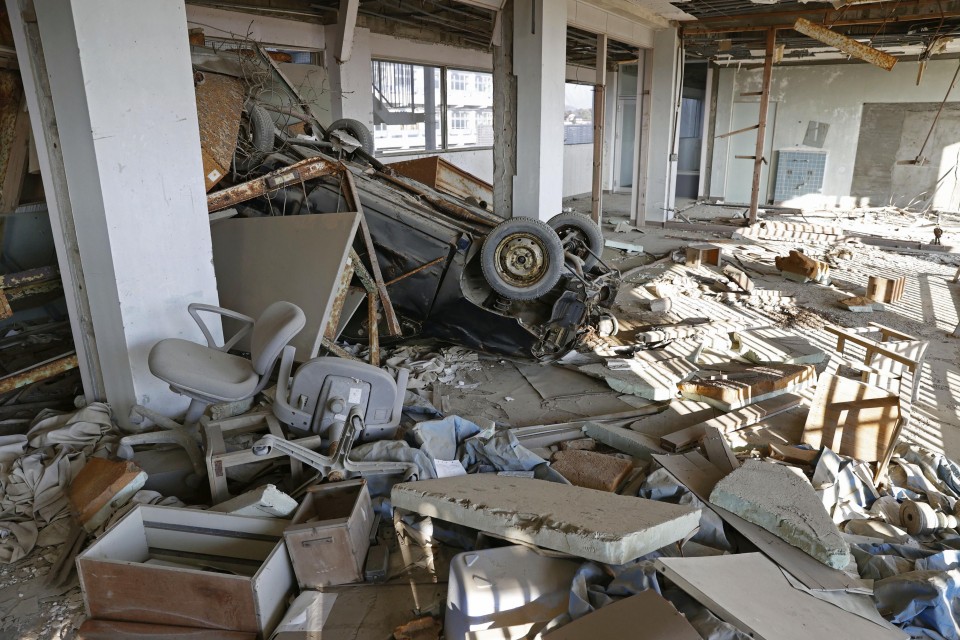 The school building that used to house Kesennuma Koyo High School, which was destroyed by the March 2011 earthquake and tsunami disaster and now part of a memorial museum in Kesennuma, Miyagi Prefecture, is pictured on Feb. 6, 2021. (Kyodo)

The memorial museum in Kesennuma, Miyagi Prefecture, centers on a school building that used to house Kesennuma Koyo High School. The memorial preserves the debris left by the tsunami, which reached the building's fourth floor, including a car that was swept into a third-floor classroom.

Around 81,000 visitors came to Ruins of the Great East Japan Earthquake Kesennuma City Memorial Museum in its second year of operations in fiscal 2020, but admissions revenue was not enough to cover the annual cost of around 55 million yen ($520,000) to run the complex, leaving the local government to shoulder the 13 million yen deficit.

At the museum, opened in March 2019, local junior high and high school students help guide visitors on school trips from across Japan, making it "a key site for disaster mitigation education," according to a Kesennuma official.

The three hardest-hit prefectures of Iwate, Miyagi and Fukushima have preserved 17 sites in all memorializing the disaster, with three open to the public for a fee and four others being readied to be opened for paid access.

In Iwate, the city of Rikuzentakata decided to charge several thousand yen per guided tour inside two ruined buildings, including a junior high school.

The city also oversees other sites, including the "Miracle Pine," a lone tree that survived in a coastal forest flattened by the tsunami. Although it later died of exposure to saltwater, it has been preserved in a memorial as a symbol of hope for the region. But donations to keep the sites running have fallen each year along with public interest.

The coronavirus pandemic has only exacerbated the problem. The number of visitors to Kesennuma's museum between last April and January dropped by more than 60 percent from the same period a year earlier. Katsumi Sato, the head of the facility, said the pandemic forced closures on some of the big holidays when there are typically many visitors.

Shingo Nagamatsu, a professor in the societal safety sciences department at Kansai University and an expert on disaster management policy, said, "People who do not live in disaster-hit areas also believe it is necessary to preserve" the sites, which should be considered important assets for the whole country.

For Japan, where natural disasters occur frequently, and experts warn of more megaquakes to come, the preserved ruins are necessary reminders to help minimize casualties in future disasters, he said.

"We should not consider the maintenance cost to be a matter only for those local governments, but we must share the burden throughout society," Nagamatsu added.