J-League first-division champions Kawasaki Frontale will raise the curtain on the 2021 season Friday night at Todoroki Stadium when they host Yokohama F Marinos, winners of the 2019 title.

After adapting brilliantly to the upheaval of the 2020 campaign -- which was suspended, then heavily condensed, because of the coronavirus pandemic -- Frontale will try to win their fourth J1 crown in five years under another set of unusual conditions. 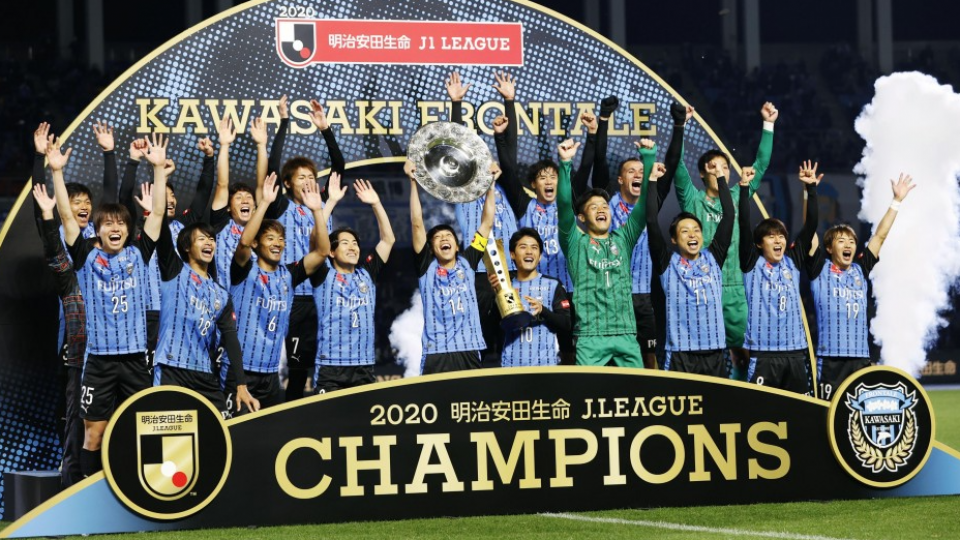 Japan's top flight will feature 20 teams for the first time, after the league decided to suspend relegation last year to avoid further disadvantaging clubs already struggling amid the pandemic.

Last year's 18 J1 clubs have been joined by the top two sides from the second division -- Tokushima Vortis and Avispa Fukuoka.

After clinching the league and Emperor's Cup double last season, Frontale signaled their intentions for the upcoming campaign with a 3-2 victory over last year's J1 and Emperor's Cup runners-up, Gamba Osaka, in the Fuji Xerox Super Cup on Saturday.

Toru Oniki's team, blending savvy veterans with some of the league's most talented young players, unleashed the aggressive, fast-paced soccer that helped them wrap up last year's title race in record time.

They will once again look to the likes of midfield conductor Ryota Oshima to lead the way, while expecting an even bigger contribution from burgeoning star Kaoru Mitoma, who topped 2020's J-League Best 11 vote as a rookie.

Following the retirement of club great Kengo Nakamura and the departure of Best 11 selection Hidemasa Morita for Europe, Frontale have reinforced their midfield with the addition of Brazilian Joao Schmidt from Nagoya Grampus, one of the other top-flight outfits eyeing a challenge for the title.

Massimo Ficcadenti's squad added former Japan attackers Yoichiro Kakitani, from Cerezo Osaka, and Manabu Saito, from Frontale, among a raft of personnel moves aimed at improving on their third-place finish from last year.

Fellow title hopefuls Gamba, meanwhile, have sought to boost their firepower up front with the signing of Brazilian forwards Leandro Pereira, from J2 Matsumoto Yamaga, and Tiago Alves from Sagan Tosu.

Tsuneyasu Miyamoto's men will also be out to avenge a run of losses against Kawasaki including the Super Cup, the Emperor's Cup final and a 5-0 thrashing at Todoroki last November that laid Gamba's title hopes to rest.

Kawasaki Frontale manager Toru Oniki (L) and Yokohama F Marinos manager Ange Postecoglou, whose teams are set to meet in the opening round of the 2021 J-League season, take part in an online press conference on Feb. 24, 2021. (Kyodo)

Local rivals Cerezo, who finished fourth last year, will try to regroup under a "new" boss who is a familiar face at the club.

The most successful club in league history, eight-time champions Kashima Antlers, will try to improve on fifth place as Brazilian manager Antonio Carlos Zago begins his second year in charge.

The league's 2020 top scorer and MVP, Kenya striker Michael Olunga, has departed Kashiwa Reysol for Qatari outfit Al-Duhail, leaving a big hole at the Chiba Prefecture club, who face a tough task repeating their solid seventh-place finish in the top flight following their promotion from J2.

FC Tokyo, who beat Reysol in the Levain Cup final after finishing sixth, have yet to win a top-flight title. Manager Kenta Hasegawa, who guided them to the team's best finish, second place, in 2019, will look to do one better than that in his fourth season.

After a somewhat disappointing ninth-place finish last year, Marinos will try to return to the summit under former Australian national team boss Ange Postecoglou, who helped the club break a 15-year title drought in 2019 by playing high-octane, possession-based football.

Urawa Reds failed to meet the expectations of their owners and fans by finishing 10th, but they have high hopes for Spanish manager Ricardo Rodriguez, whom they lured away from Tokushima after he helped the Shikoku club earn J1 promotion for just the second time.

Rodriguez's term with Urawa got off to a challenging start, however, when he was forced to reprimand veterans Yosuke Kashiwagi and Kenyu Sugimoto for violating coronavirus safety protocols during the team's preseason camp in Okinawa.

The coronavirus continues to loom large over the league and could play a role in deciding this year's title race, as well as the relegation battle, in which the bottom four teams will automatically drop to J2.

If a club cannot field enough healthy players for a match, and an alternative date cannot be scheduled, the fixture will be deemed "played," with the side determined to be responsible for the cancellation losing 3-0.

The season will kick off with Tokyo and several other prefectures still under a state of emergency aimed at curbing infections, forcing stadiums to limit attendance and impose restrictions on fan behavior.

But by successfully navigating the unprecedented obstacles of the previous season, the league has so far shown its ability to meet a variety of challenges.