Senior communications ministry bureaucrats are being probed for a potential ethics code violation following a report that they were treated to expensive dinners by a son of Prime Minister Yoshihide Suga, the top government spokesman said Thursday.

Japanese weekly magazine Shukan Bunshun has reported that the four senior officials were taken to posh Tokyo restaurants and given gifts by Suga's eldest son, who works at a company operating satellite broadcasting services, between October and December last year. 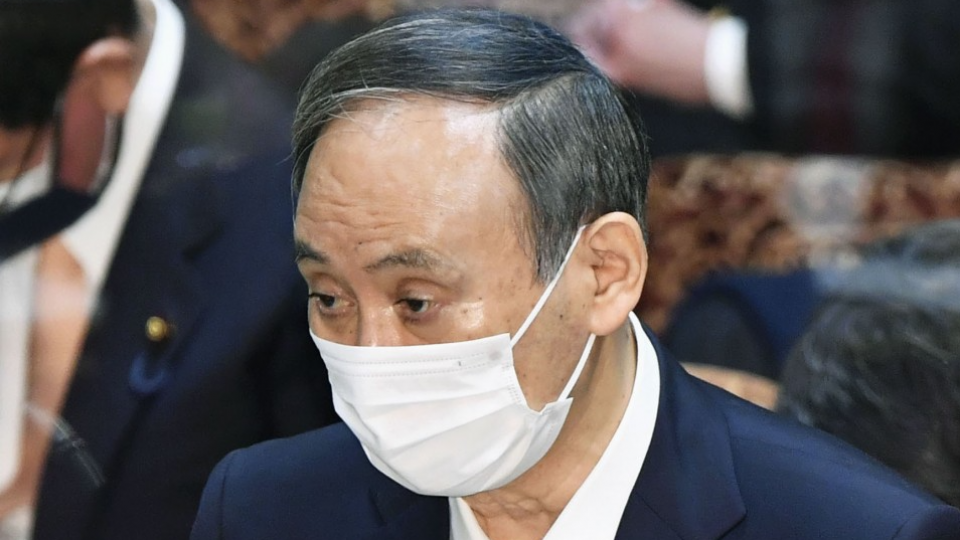 Japanese Prime Minister Yoshihide Suga speaks at a House of Representatives budget committee session in Tokyo on Feb. 4, 2021, with a transparent acrylic screen set in front of him to prevent coronavirus infection. (Kyodo) ==Kyodo

"I understand the details are being investigated at the Internal Affairs and Communications Ministry as it closely works with the National Personnel Authority," Chief Cabinet Secretary Katsunobu Kato said Thursday at a regular news conference.

"If there were indeed acts that violated the National Public Service Ethics Law, that could damage people's trust in national public servants, and the Justice Ministry will take measures accordingly," Kato added.

Suga said he was not aware of the dinners.

"I want the ministry to confirm what happened and respond in accordance with the rules," he told a Diet committee session.

Among the four officials reported to have dined with Suga's son, Yoshinori Akimoto, director general of the Information and Communications Bureau, admitted to being treated to meals and receiving transportation expenses.

He also said he has paid back the equivalent amount of money after learning that the dinners were participated in by those related to businesses under the jurisdiction of the ministry.

Tohokushinsha Film apologized in a statement, saying it has caused much trouble and worries among people involved. "We will take appropriate measures after investigating what happened," the statement said.

Suga's son became acquainted with some of the four senior bureaucrats when he served as a secretary to his father, who was internal affairs and communications minister between 2006 and 2007, according to the weekly magazine.