Japan's parliament on Wednesday enacted laws that will introduce fines for people and businesses that do not comply with restrictions imposed to prevent the spread of the novel coronavirus.

The passage of bills that revise the coronavirus special measures law and the infectious disease law came just a day after Japan extended a state of emergency over the virus covering Tokyo and other regions by one month to March 7, as hospitals remain under pressure. 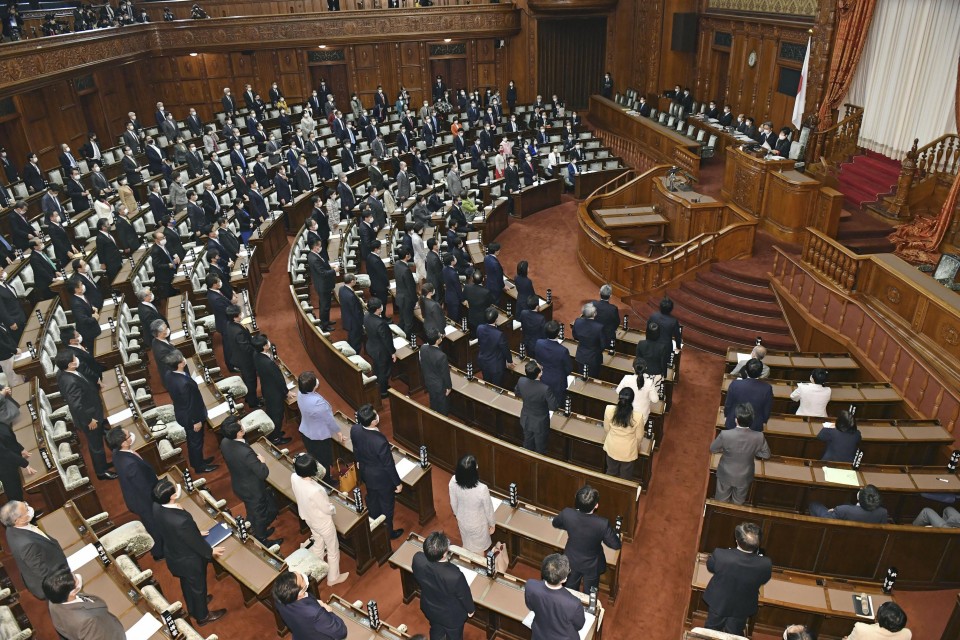 Photo taken on Feb. 3, 2021, shows a House of Councillors plenary session, which passed and enacted revisions to the coronavirus special measures law and the infectious disease law the same day. (Kyodo) ==Kyodo

While the government had initially sought to imprison COVID-19 sufferers who refuse to be hospitalized, the plan was scrapped after talks between the ruling Liberal Democratic Party and the main opposition Constitutional Democratic Party of Japan, the latter categorizing such a step as excessive.

Under the revised laws, expected to take effect next week, COVID-19 patients resisting hospitalization can be fined up to 500,000 yen ($4,760) and those who fail to participate in epidemiological surveys by health authorities, up to 300,000 yen.

Restaurants and bars that fail to cooperate with orders to reduce their operating hours can be fined up to 300,000 yen.

The legislation comes after some people left hospitals or refused to be hospitalized, including a man who fled hospital during treatment for his serious COVID-19 symptoms to visit a spa and his office, saying he was worried about his business.

Health minister Norihisa Tamura told a House of Councillors committee dozens of municipalities have reported instances of people refusing to be hospitalized or escaping from care. "We have incorporated penalties to ensure the effectiveness" of antivirus measures, he said. 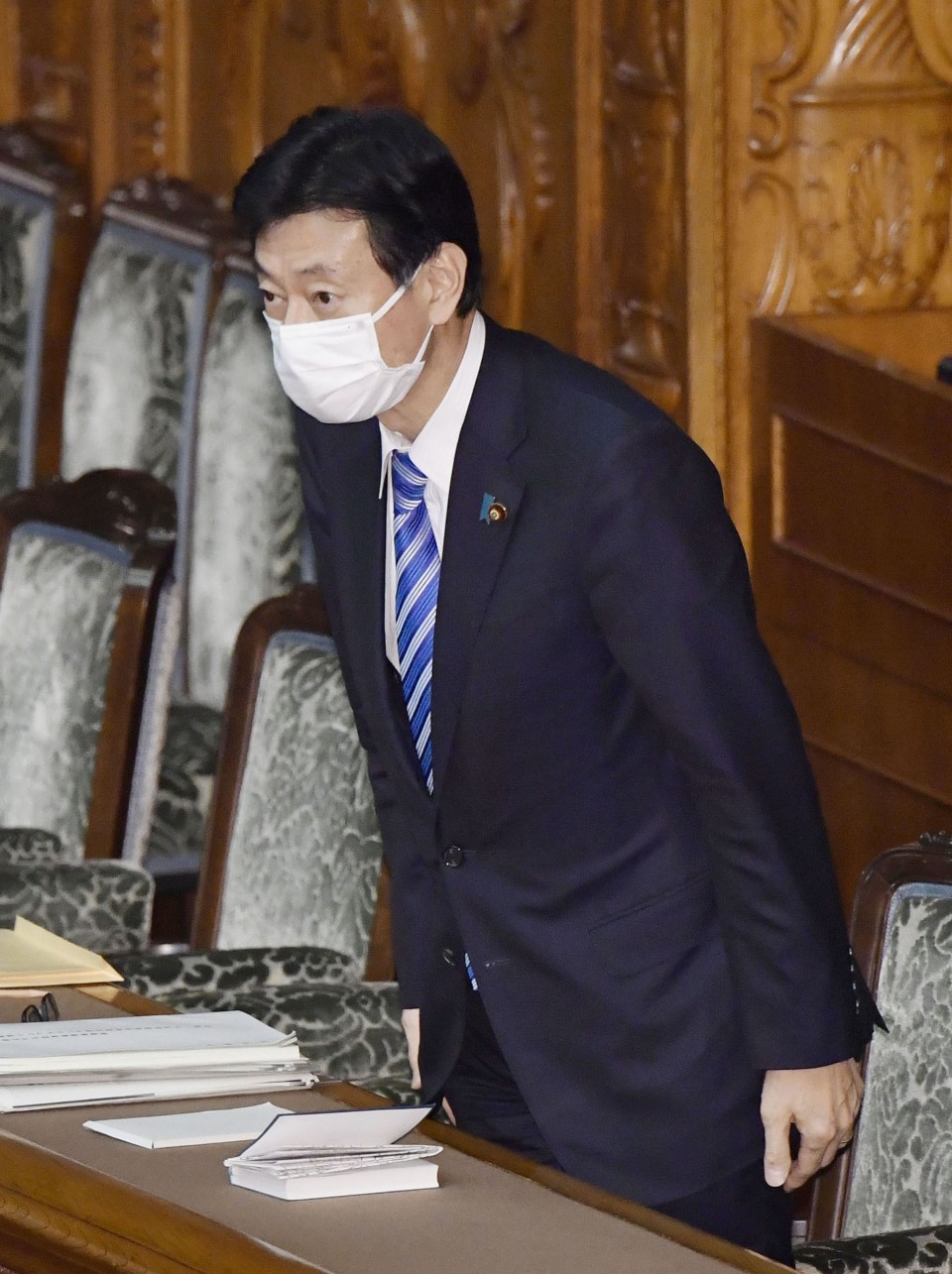 Japanese economic revitalization minister Yasutoshi Nishimura bows during a House of Councillors plenary session in Tokyo on Feb. 3, 2021, after the upper chamber passed and enacted revisions to the coronavirus special measures law and the infectious disease law. (Kyodo) ==Kyodo

Currently, people with serious COVID-19 symptoms are hospitalized in principle, while those with mild or no symptoms are allowed to recuperate at designated hotels or at home.

At present, prefectural governments can only make requests that antivirus measures be observed without enforcement.

The legislation will also enable the government to declare a situation that fall short of a state of emergency in which special measures can be taken to combat the spread of the virus.

The government envisages the designation will be triggered when infections are surging in a situation equivalent to Stage 3, the second-highest on the government's four-level alert system.

Yasutoshi Nishimura, minister in charge of Japan's coronavirus response, tried to quell worries that the conditions for the designation could be unclear by telling the upper house committee the government will present objective standards and will decide after listening to expert opinions.

When the bills cleared the lower house on Monday, a resolution was attached urging the government to take into account how people's rights may be impinged by measures imposed to curb the virus' spread, even in the absence of a state of emergency declaration.

The resolution also called on the government to swiftly report to the Diet if there is any change to the designation's period of enforcement or target areas. 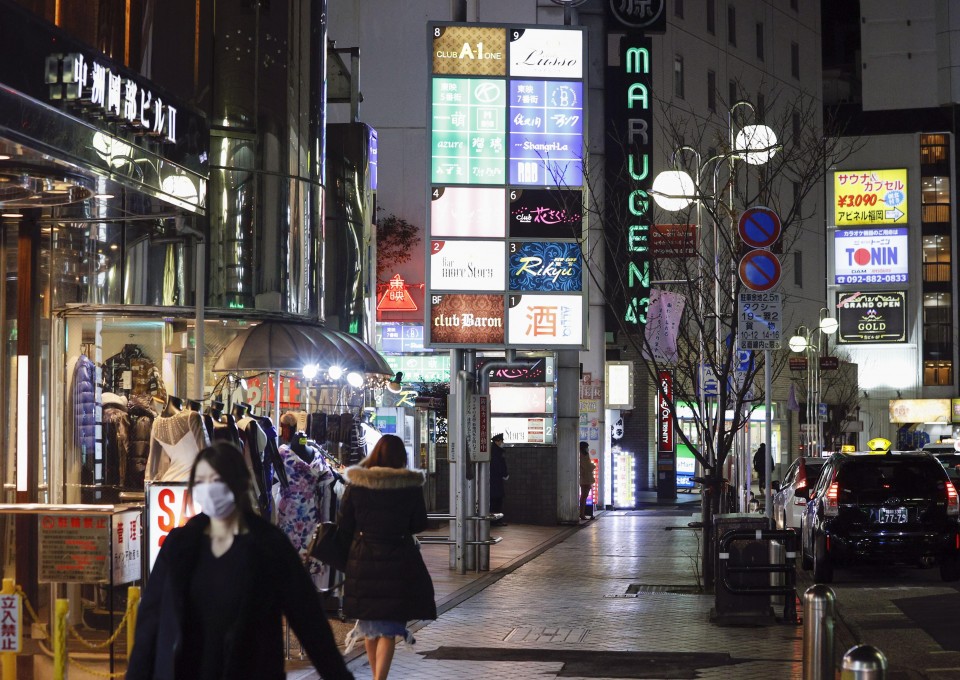 Fewer people than usual are seen in Fukuoka's Nakasu area on Feb. 2, 2021. Japan extended the coronavirus state of emergency for Tokyo, Fukuoka and other regions the same day by one month to March 7 in view of manpower-strapped hospitals. (Kyodo) ==Kyodo

The government had originally considered introducing to the infectious disease law a prison sentence of up to one year or a maximum fine of 1 million yen for COVID-19 patients who refuse to be hospitalized, and a fine of up to 500,000 yen for those who do not cooperate with epidemiological surveys.

But it backed down on the plan amid concerns over the proposed penalties.

The government also reduced the fines from its original plan and has set a limit of up to 300,000 yen for restaurants and bars that fail to cooperate with orders to reduce their operating hours under a state of emergency and up to 200,000 yen for those not cooperating with measures imposed under the less severe declaration.

Prime Minister Yoshihide Suga declared a state of emergency for Tokyo and three adjacent prefectures on Jan. 7 and expanded it six days later to seven more prefectures, including Osaka, Aichi and Fukuoka. On Tuesday, he announced its extension for 10 prefectures, excluding Tochigi Prefecture located north of the capital.

Under the state of emergency declared based on the special measures law, the government has urged people to stay at home as much as possible and asked bars and restaurants to cut opening hours.

But unlike other countries that have imposed heavy penalties for noncompliance, Japan had no punishment for those refusing to cooperate with the requests.

Some bars and restaurants, already hit hard by the pandemic, have ignored the request on shorter business hours to avoid losing more customers.

Japan extends virus emergency to March 7 as hospitals under strain