Tokyo confirmed 276 new coronavirus cases Monday, marking the lowest daily infections in more than two months under an extended state of emergency in the capital and other areas.

The number is the fewest cases since Dec. 7 and compares with a record 2,447 daily cases reported when the government declared a state of emergency in Tokyo and some prefectures on Jan. 7 in response to a spike in virus cases.

The government decided last week to keep the one-month emergency declaration through Sunday in place for another month in nine prefectures plus Tokyo in a bid to alleviate the strain on the medical system and bring the infection situation under control. 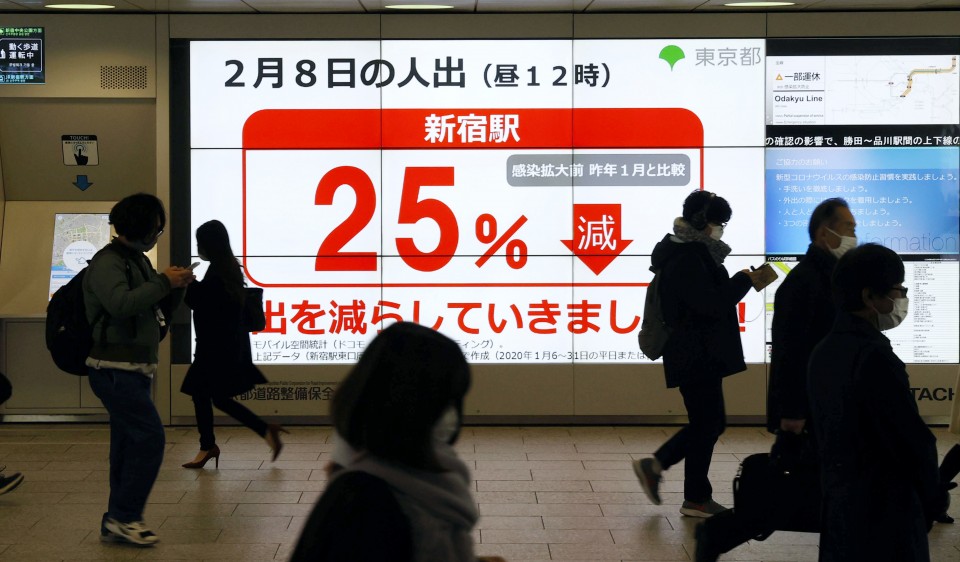 Pedestrians pass in front of digital signage showing daytime crowd volume, in comparison with that in January last year, at Shinjuku Station in Tokyo on Feb. 8, 2021. (Kyodo)

Tokyo saw nearly 40,000 cases in January, more than double the previous monthly record infections in December, but its daily cases have been on a downward trend lately. The capital's cumulative infections total more than 104,000.

Still, infections among the elderly, considered at higher risk for developing severe symptoms, are on a rising trend, as 97 of the 276 cases or about 35 percent were people aged 65 or older, according to the metropolitan government.

The Tokyo government the same day began showing the daytime number of those traveling at major rail stations on digital signage to warn people to avoid the "3Cs" -- confined spaces, crowded places and close-contact settings.

The figures are displayed at 10 locations at Shinjuku, Shibuya, Ikebukuro and Shimbashi stations to compare with the average crowd volume in January last year, before infections spread widely, and the metropolitan government plans to increase the number of such locations.