In what could be construed as applying pressure, a group of LDP lawmakers sent a written request to the members, the sources said. The group also includes Tamayo Marukawa, who recently took over as minister in charge of women's empowerment and gender equality. 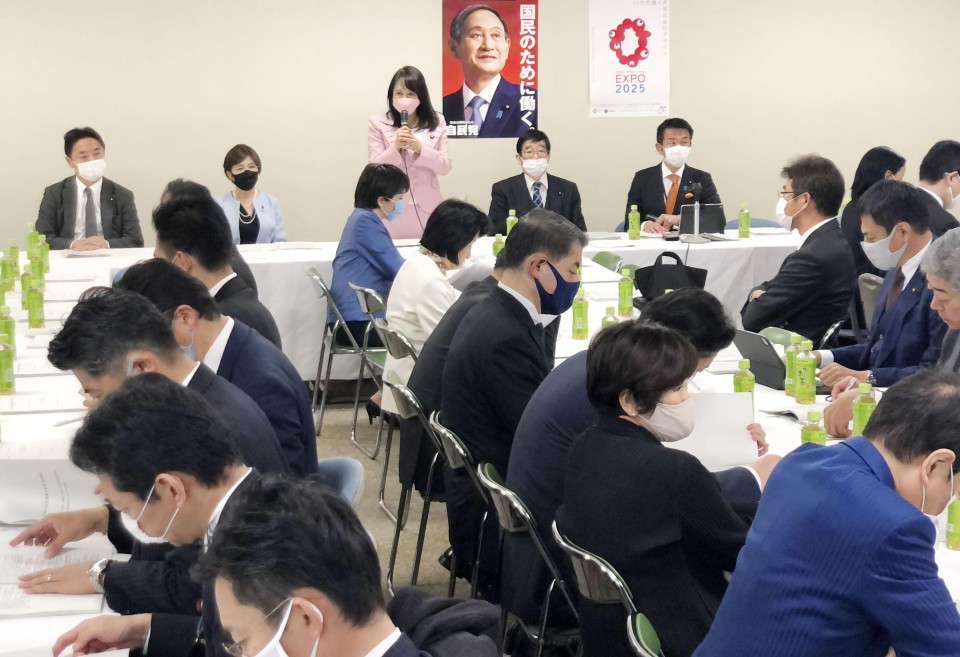 Liberal Democratic Party lawmakers discuss at a meeting in Tokyo on Dec. 8, 2020, whether to enable married couples to have separate surnames. (Kyodo)

The 50 LDP members from both houses of parliament asked in a letter dated Jan. 30 that the members reject in their local assemblies a written opinion in favor of a policy change for different surnames.

For proponents, written opinions adopted in the assemblies could help build momentum for discussions in parliament and among the public regarding the issue.

The lawmakers, in their written request, argue that separate surnames could result in the collapse of the social system.

When asked by an opposition lawmaker in a parliamentary session about the written request, Marukawa said, "It is my duty to push for further discussions in parliament."

Japan's Civil Code requires a married couple to share a surname, and conventionally, the burden has largely fallen on women to change names after marriage.

Conservatives who say they cherish traditional values are adamantly opposed to separate surnames, and argue the move may have an impact on family unity as well as children.

Marukawa last week took over the post of Olympic minister as well as minister for gender equality after Seiko Hashimoto became head of the Tokyo Olympic organizing committee. Hashimoto succeeded Yoshiro Mori, who quit the committee earlier this month after making sexist remarks.

"Unfortunately it has become clear that Japan is only halfway in efforts (to achieving) gender equality," Marukawa said in her first press conference last week after becoming Olympic minister, and called for a change in the current situation.

The government approved its basic gender equality promotion policy in December but did not include a commitment to allowing the use of different surnames for married couples.

The draft policy had included wording positive about separate surnames but ultimately such language was dropped due to opposition from conservative lawmakers.