An increasing number of Myanmar people have begun protesting the military coup by banging cooking pots outside their windows, as ousted civilian leaders such as Aung San Suu Kyi remain detained.

Most of those who have turned to the form of protest have been doing so while staying indoors, apparently to avoid being rounded up by security forces, but their no-so-quiet expression of protest is palpable.

In Yangon on Wednesday, as the clock hit 8 p.m., residents popped their heads out of the windows with ladles in their hands and started banging cooking pots. 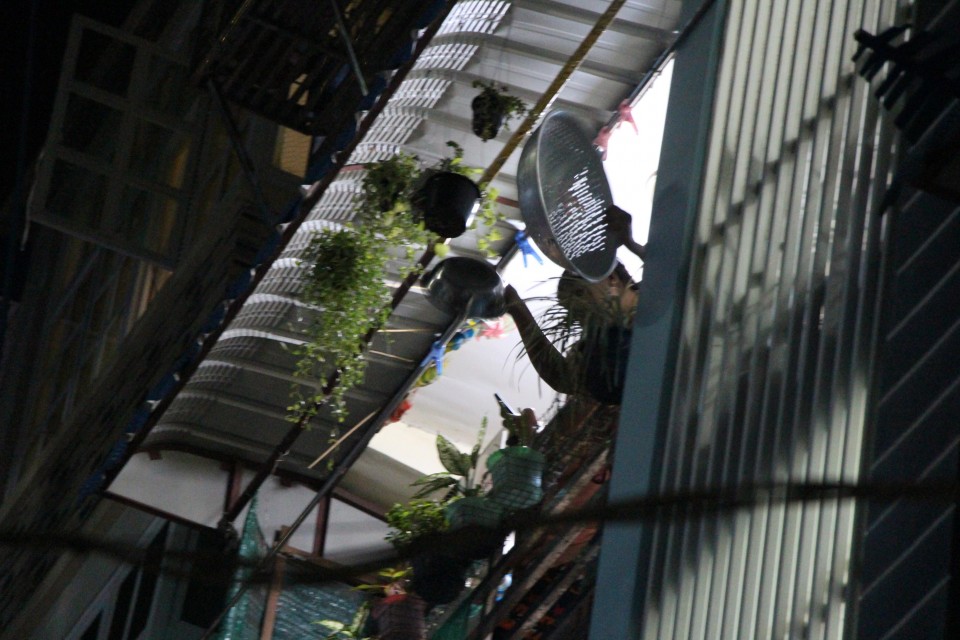 People bang household utensils outside the window of an apartment building in Yangon on Feb. 3, 2021. (Kyodo)

"It's truly sad that military rule has returned, but I don't want to give in," a 43-year-old man said as he banged a pot with his family.

Supporters of the military have been marching on the streets of Yangon chanting criticisms of Suu Kyi's formerly ruling party, which despite winning a landslide victory in a November general election, was ousted from power in the coup.

Some people have held candlelight vigils to quietly express their opposition.

"Thinking about the future makes me feel gloomy, but I feel I'm not the only one fighting," a 31-year-old woman said as her neighbors banged their pots.

In the country's second-largest city, Mandalay, a group of people waved banners and chanted anti-coup slogans on Thursday in the first such street protest since the coup, Reuters news agency reported, citing images posted on social media.

Meanwhile, the Information Ministry has ordered telecom operators in the country to block access to Facebook until Sunday, apparently to stop the National League for Democracy from trying to reach the public through social media.

Users of some telecom operators became unable to access Facebook via their smartphone and personal computers on Thursday morning.

The NLD has been calling on Myanmar people to resist the coup via posts on Facebook.

NLD members said Wednesday that a court has granted a police request to detain Suu Kyi until Feb. 15 for illegally importing and using communications equipment.

A leaked police document circulating among local journalists showed the police seeking remand to keep her detained at home, after private security staff at her residence in the capital Naypyitaw were found to be holding unlicensed walkie-talkies after the coup.

The document shows police seeking charges for offense under the export-import law that is punishable by up to three years in prison.

The court also granted permission for police to detain ousted President Win Myint for two weeks for having violated coronavirus restrictions last September when he observed an NLD election rally in front of his Naypyitaw home involving over 200 cars.

The Myanmar military has released about 400 people, including NLD lawmakers, and has ordered them to go home, party lawmakers said Wednesday.