The annual Lunar New Year celebrations will be more muted in Singapore this year as many restrictions to curb the spread of novel coronavirus remain in place, with roving lion dance troupes that are in high demand during the festivities badly hit.

Despite being able to contain the COVID-19 pandemic and having entered Phase 3 in reopening the economy after a semi-lockdown most of last year, many restrictions on social gatherings are continue to be imposed in the wealthy city-state. 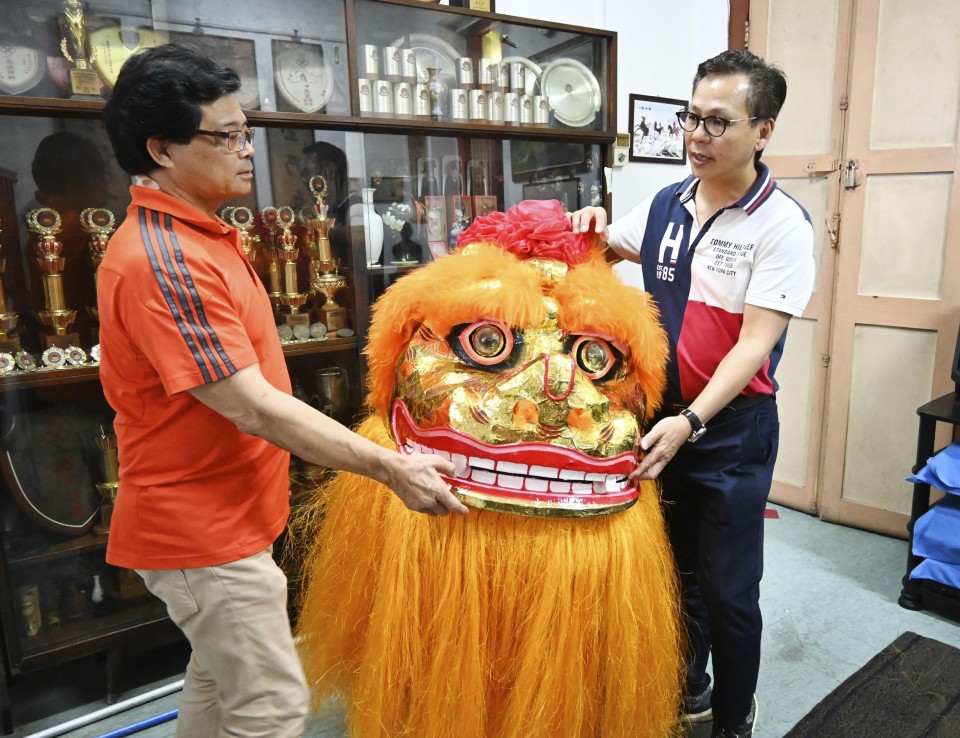 Jack Tan (R) explains about lion dance at the office of the Singapore Chin Woo (Athletic) Association on Jan. 21, 2021. (Kyodo)

People are still required to wear masks in public places, and the government is ramping up vaccinations and testing for the coronavirus all over the island.

The government is encouraging people to meet virtually in celebrating the Lunar New Year, which falls on Friday, so as to minimize social gatherings. Prime Minister Lee Hsien Loong appealed to Singaporeans in a Facebook post on Monday to limit their house visits during the festival to family members only.

The number of visitors that every house can receive per day is currently capped at eight, and people are not allowed to visit more than two houses per day, which is expected to affect the tradition of having reunion dinners on the eve and the tradition of house visits.

Restaurants cannot have more than eight diners occupying a table and intermingling between tables is forbidden, with restaurants ordered by the authorities to make sure that large groups of people from different households do not gather at the same restaurant, occupying more than one table and mingling with each other.

People have been told not to shout out the auspicious words that Chinese people usually say during the ritual tossing of a raw fish dish during their social gatherings that could risk transmission of the virus, and urged to replace cash gifts that are traditionally given out in red packers with electronic money transfers through smartphone apps.

"Let's be mentally prepared that Chinese New Year this year will not be the same as before, it will be quieter, it will be more subdued," Education Minister Lawrence Wong, who also co-chairs the Multi-Ministry Taskforce on COVID-19, recently told a press conference.

"We will be stepping up our enforcement checks," he said. "Around Asia, many regions many places, they too are putting curbs and restrictions on Chinese New Year."

One of the worst-hit is the centuries' old tradition of the lion dance. Many Chinese Singaporean homes will not be able to welcome the new year with the clash of cymbals and the beating of drums that accompany the sight of youths performing acrobatic stunts inside lion-like costumes.

The Singapore Wushu Dragon and Lion Dance Federation announced last month that there will be restrictions on lion dance performances at this year's Lunar New Year season, in line with the government's current policies.

The lion dance troupes will not be allowed to perform at residential areas but only at big shopping malls and commercial premises and temples. The number of performers are capped at eight while the organizers of the event have to make sure that the crowd watching the show does not get bigger than 50 people.

"This year, we don't intend to participate because of safety reasons. We have to stand 1 meter apart, but we cannot control the crowd. Quite difficult and also quite dangerous," said Jack Tan, of the Singapore Chin Woo (Athletic) Association, which has a 100-year-old history that includes promoting the art of lion dance. 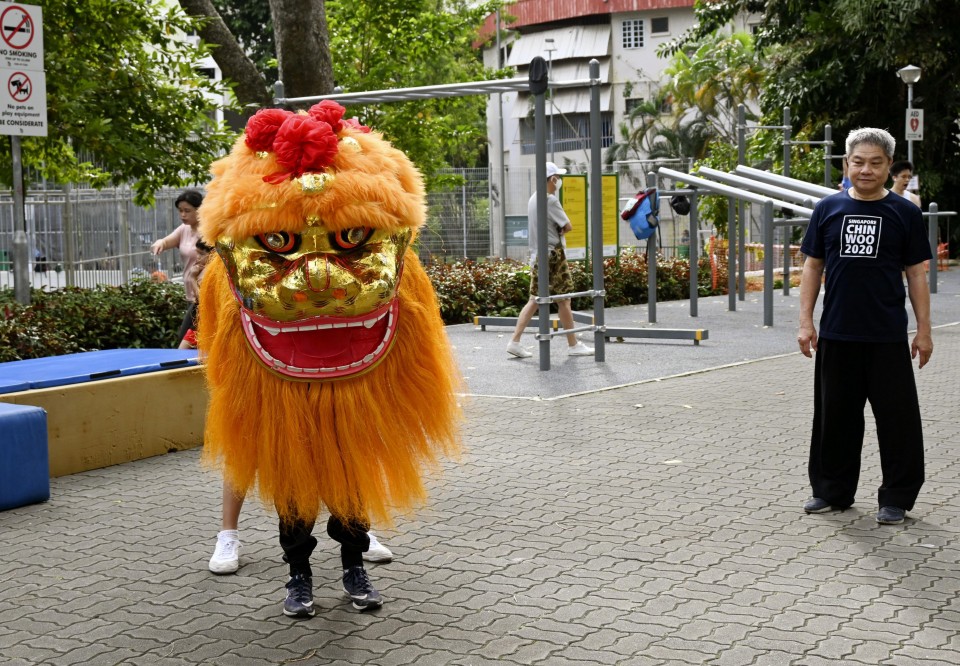 Members of the Singapore Chin Woo (Athletic) Association practice lion dance in a park in Singapore on Jan. 24, 2021.

Usually, young members of the association who are well trained in the art of the lion dance would move around in a group of 20 to 30 people to perform at different places during the new year season.

It has been estimated that there are about 200 to 300 lion dance troupes in Singapore, and most of them depend on the high demand in the new year which is enough to fund their operations and activities for the rest of the year.

"It's a cultural thing that most of the people want to engage a lion dance during Chinese New Year for good luck purpose, housing residential and business," said Carey Chin, 38, who set up a lion dance troupe with friends about 15 years ago.

"During the Chinese New Year, most of the lion dance teams will go for the performances, they will get enough income to cover the rental and expenses throughout this year. That will be very badly hit now. But this is a pandemic. We have to comply.

Last year, Singapore saw a spike in COVID-19 cases after Lunar New Year with several clusters linked to new year gathering. "We don't want a repeat of that happening and that's why we tighten the measures," Wong said.

The government has also beefed-up enforcement inspections and warned that it will not hesitate to take firm enforcement action, such as fines and suspension of operations, against those who breach the rules. Singapore deploys some 3,000 "safe distancing ambassadors" in public places such as shopping malls to prevent that.

A Chinatown Festivals website has been set up that provides a 360-degree virtual tour of the street light-up since February while an annual street parade that takes place soon after the new year will be replaced with a fully digital version.