The government is aiming to make it easier for people to evacuate home with their pets in a natural disaster by ensuring they have information on where to go.

The Environment Ministry is preparing a checklist for local governments with a view to making it simpler for pet owners to find out which shelters accept dogs, cats and other pets, officials said. 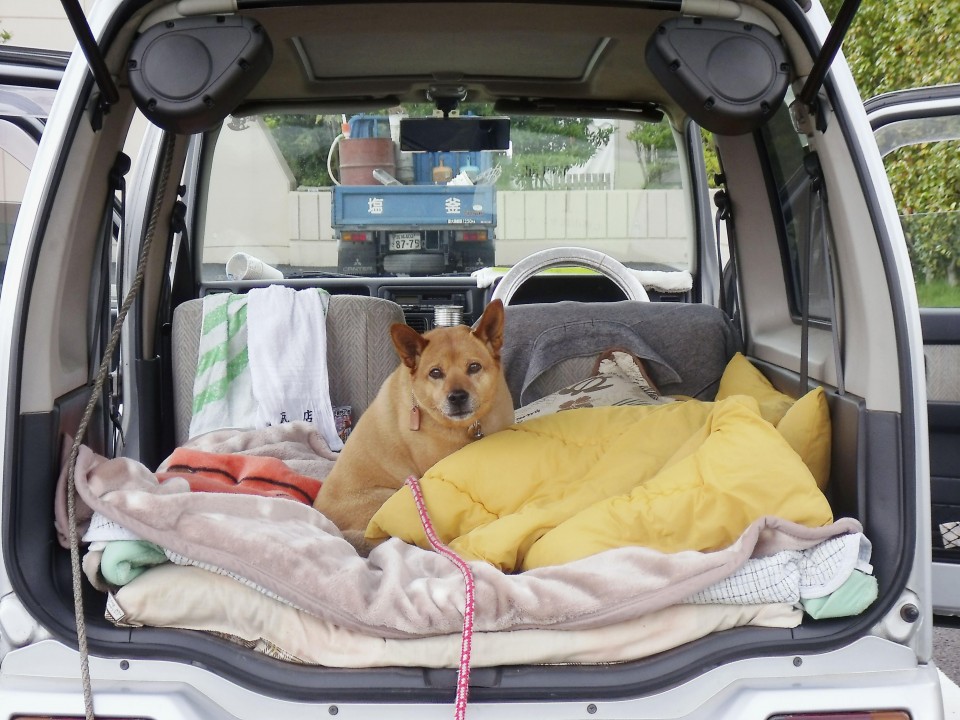 Supplied photo shows a dog sheltering in a car with its owner in Miyagi Prefecture after they evacuated home following the March 2011 quake and tsunami disaster. (Photo courtesy of the Sendai city government)(Kyodo)

In past major natural disasters in Japan, including powerful earthquakes that struck Kumamoto Prefecture and its vicinity in 2016, some people were forced to stay in their cars after they were turned away from shelters because they were accompanied by their pets.

Even when accepted by shelters, pet owners often get into trouble with other evacuees because of the noise made by their animals.

The ministry will instruct the operators of shelters to make sure they have clear guidelines for dealing with evacuees with pets, taking account of past issues.

In the checklist, the ministry will ask local authorities whether they have made information available on which shelters accept pets, as well as whether they have a set procedure to follow when pet owners arrive at shelters that cannot accept animals.

The ministry will also check if municipalities have worked with local veterinary associations and animal welfare organizations to support pet owners in times of disaster, the officials said.

Some disaster experts point out that a lack of close coordination between the animal welfare and disaster management sections of local governments is hindering authorities' efforts to streamline evacuation measures for people with pets.

Against this backdrop, the ministry also plans to conduct evacuation drills involving pets and their owners in around three locations in fiscal 2021, starting in April.

Pet owners in Japan are often forced to choose between staying behind with their animals or evacuating to a shelter without them.

In the 2011 earthquake and tsunami that devastated northeastern Japan, dogs and cats left behind by their owners strayed into woods and mountains, causing problems for local authorities.

In 2013, the ministry recommended pet owners evacuate with their animals while asking local governments to develop guidelines for evacuation shelter operations, including how to deal with pets.

However, local governments have been slow to respond, and what to do about pets remains an issue in a major disaster, the officials said.

When a powerful typhoon approached Nagasaki in September last year, the city government was flooded with inquiries about whether evacuation shelters would accept pets.

Since the city did not have clear guidelines, responses varied depending on shelters, it said.

"Making it possible for pets to evacuate would also help protect the lives of their owners," a ministry official said. "It is necessary for each local government to take the initiative and proceed with preparations together with the residents."