The first batch of a Chinese-made coronavirus vaccine arrived in Thailand on Wednesday morning ahead of a vaccination rollout next week.

The 200,000 of a total of 2 million doses the Thai government has ordered from Beijing-based Sinovac Biotech Ltd. were flown to Bangkok. 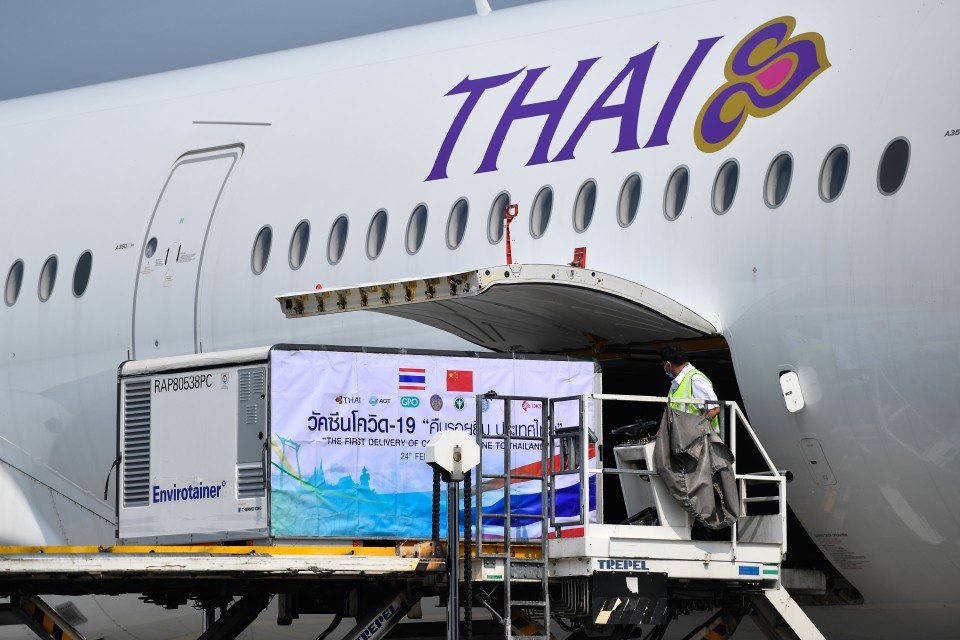 A worker unloads a container from a Thai Airways plane with doses of vaccines during the arrival of the first shipping of the Sinovac vaccine at Suvarnabhumi Airport on Feb. 24, 2021 in Bangkok, Thailand. (NurPhoto/Getty/Kyodo)

Later Wednesday, 117,000 doses of the vaccine developed by Britain's AstraZeneca Plc and the University of Oxford arrived in Thailand.

The Sinovac batch will be given to front-line medical staff and people in need aged 18-59 in Bangkok and 17 other provinces, including neighboring Samut Sakhon which has had a relatively large number of cases.

"I am delighted that the first lot has arrived as scheduled, and more will come," Prime Minister Prayut Chan-o-cha said, adding that vaccines will also be manufactured locally to ensure access by every Thai.

The Thai government has ordered 61 million doses from AstraZeneca with a deal for the vaccine to be manufactured by local pharmaceutical company Siam Bioscience.

Thailand has reported about 25,700 virus cases so far with 83 fatalities.