The final edition of the Japan Rugby Top League kicks off Saturday with a plethora of world superstars on show and plenty to play for as the sport looks to make the transition from a corporate-run entity to a more professional competition from 2022.

Beginning next year, the top 25 teams in the nation -- 16 from the Top League and nine Top Challenge League sides -- will play in a new three-tier competition, and this year's results will play a major role in determining which teams enter which division.

The season was originally slated to begin Jan. 16 but was postponed after multiple teams suffered COVID-19 outbreaks. 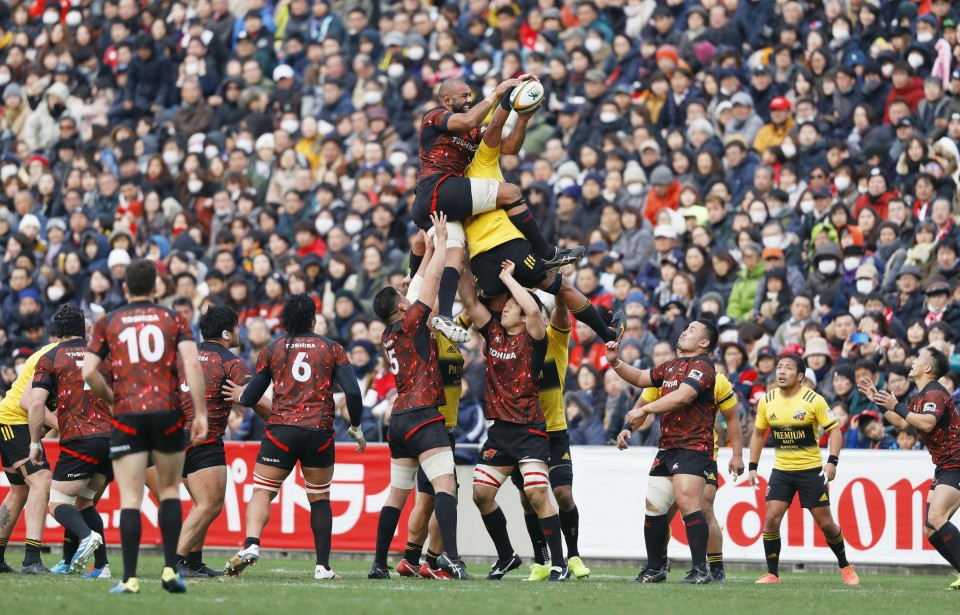 As such, a revised format sees the Top League teams initially split into two groups of eight for a single round-robin tournament to determine the seedings. They will then be joined by the Top Challenge League's four leading teams in a 20-team knockout competition to determine the last-ever Top League champion.

There will be 75 matches in total; 56 conference-stage matches from Feb. 20 to April 11 and 19 playoff matches from April 17 to May 23, with no shortage of international talent on display.

As Panasonic Wild Knights coach Robbie Deans recently pointed out, Japan "used to be a twilight destination where players would go at the end of the careers. But now we have seven All Blacks from the most recent World Cup, six of the Rugby World Cup winning Springbok team...and five from the Wallabies."

Add in England's George Kruis, Wales' Hadleigh Parkes and former Scotland captain Greig Laidlaw and there is plenty of reason for increased overseas interest in the league.

The big question is what the interest will be in Japan, especially with crowds initially limited due to COVID restrictions.

Japanese rugby was riding a huge wave of momentum following the successful Rugby World Cup in 2019. But due to the 2020 domestic season's cancellation, the Top League has played just six rounds since Dec. 15, 2018, when Kobe Kobelco Steelers hammered Suntory Sungoliath 55-5 to claim their second title.

In order for the game to maintain its momentum, some local players will need to step up, not just so Japan coach Jamie Joseph has options ahead of the next World Cup in France in 2023, but to prove to the naysayers that rugby is not just popular on account of the foreign imports.

But in recent times, Panasonic's Shota Fukui, Kobe's Lee Seung Shin and Taira Main of Ricoh Black Rams have all opted out of that higher-education route in order to pursue their rugby careers. And all will be hoping to make an impact when the season kicks off on Saturday.

Only four sides have won the league since it started in 2003. Suntory and Toshiba Brave Lupus are both five-time champions, the Wild Knights won once as Sanyo and three times as Panasonic, while Kobe have two titles to their name.

With All Blacks Aaron Cruden and Ben Smith having joined Brodie Retallick at the Steelers, Kruis and Parkes signing with the Wild Knights and two-time World Rugby Player of the Year Beauden Barrett set to play alongside Wallabies Samu Kerevi and Sean McMahon at Sungoliath, the smart money would be on one of those three teams, who have also invested wisely in young local talent, repeating.

But with the revised format, there will be opportunities for teams that have traditionally finished outside the top four to knock off one of the powerhouses.

Kubota Spears recently edged out Panasonic in a preseason game, while Toyota Verblitz will be hoping Kieran Read, Michael Hooper and Willie le Roux can see the team finally fulfill their potential, and NTT Communications Shining Arcs will have plenty of support from signing fan favorite Laidlaw.

However, the Shining Arcs' preseason has been shrouded in mystery with Japan No. 8 Amanaki Lelei Mafi not registered for the league campaign. The Japan Rugby Football Union have simply said he could be added at a later date, while the club will not say any more than his absence is "due to his condition."

As the saying goes, all will hopefully be revealed in the coming months.