Japan's northeastern region braced for aftershocks Sunday following an earthquake of magnitude 7.3 overnight that injured more than 150 people, cut power and water, and disrupted bullet train services, with some residents looking weary as they tidied up the mess in their homes and shops.

No deaths were attributed to the temblor that struck at 11:07 p.m. Saturday, registering upper 6 on Japan's seismic intensity scale of 7 in parts of Fukushima and Miyagi, the prefectures devastated by a magnitude-9.0 quake and tsunami in March 2011 that left more than 15,000 people dead and triggered a nuclear crisis. 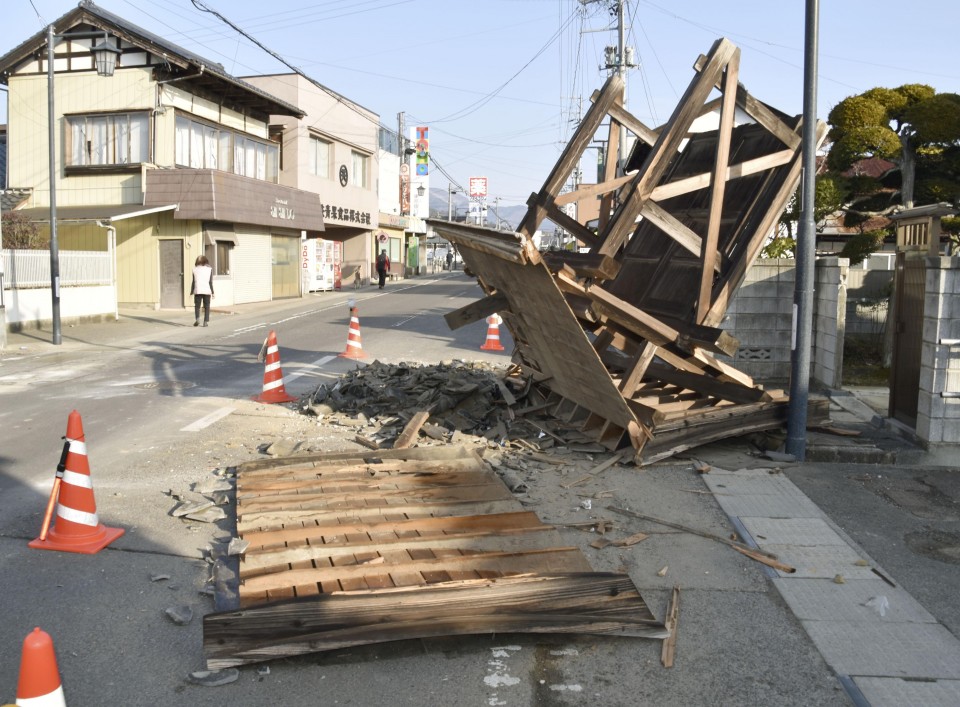 While a tsunami did not occur, Saturday's quake provided a chilling reminder of that disaster, just weeks before its 10th anniversary.

In Koriyama in Fukushima, Yosuke Mashiko, 37, was cleaning up smashed bottles and glasses in the "izakaya" Japanese-style pub that he runs. 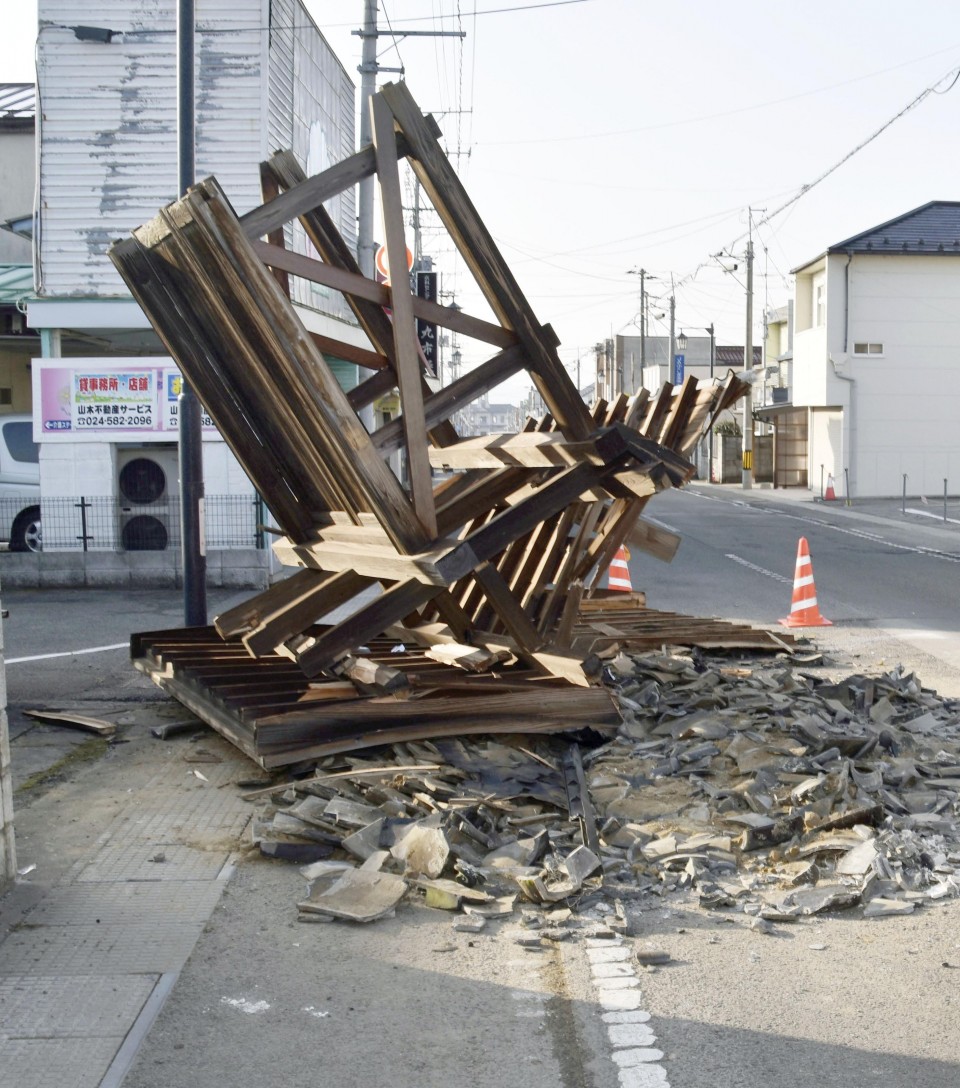 With his business already hurt by the spread of the novel coronavirus, Mashiko said, "I'm at a loss, although I can't blame anybody (for the pandemic and quake)."

Jonathan Stimmer, a 34-year-old doctoral student at Tohoku University in Sendai, the capital of Miyagi, said, "I was relieved to know we were not expecting any tsunami." He was at home when the latest quake happened.

Stimmer said his microwave and a few plates fell to the floor, adding the temblor was a "reminder to stay safe and alert over the next few days."

Injuries were reported in the two prefectures and seven others, including Chiba, Kanagawa and Saitama that neighbor Tokyo, a Kyodo News tally showed. The quake was also felt in the Japanese capital and several other areas.

Water in a spent nuclear fuel pool spilled over at the Fukushima Daiichi power plant, which suffered meltdowns after the March 11, 2011, disaster, but there was no leak, according to operator Tokyo Electric Power Company Holdings Inc.

Other nuclear utilities reported there were no irregularities.

Prime Minister Yoshihide Suga said at a meeting of Cabinet members in the morning that the government had received reports of many injuries but no deaths and urged people to stay alert.

"We want people to act quickly by not letting their guard down and paying close attention to information provided by local authorities," Suga said, noting there could be quakes with an intensity of upper 6 over the next seven days or so.

Since late Saturday, a series of aftershocks registering up to 4 on the intensity scale have been occurring.

Around 950,000 households were left without electricity at one point, but power had been restored by Sunday afternoon.

The areas hit by the quake as well as the 2011 disaster contain Tokyo Olympic venues, including Azuma Stadium in the city of Fukushima, which will host baseball and softball games. The organizing committee of the games, due to begin in July, said all facilities were reported as undamaged. 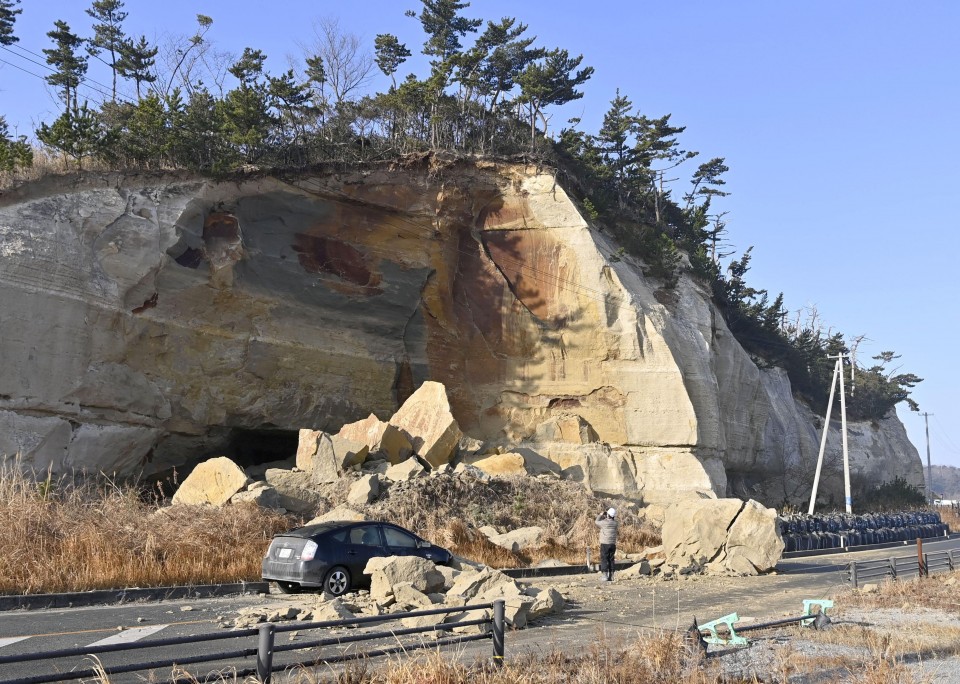 Fallen rocks are seen on a road in Soma, Fukushima Prefecture, on Feb. 14, 2021, after an earthquake with a magnitude of 7.3 struck northeastern Japan late on Feb. 13. (Kyodo) ==Kyodo

Chief Cabinet Secretary Katsunobu Kato said he had been assured that ultracold storage of Pfizer Inc.'s novel coronavirus vaccine, the first doses of which arrived in Japan on Friday, was unaffected by the blackouts.

As at least 240 people had sought shelter in evacuation centers in Fukushima and Miyagi prefectures, Kato stressed that measures to prevent the spread of the virus had been implemented.

In Soma in Fukushima Prefecture, the city government set up tents for individual families in a gymnasium, with up to 92 residents staying there after having their hands disinfected and their temperatures taken at the entrance.

Some parts of the two prefectures had experienced disruptions to water supply that affected medical institutions.

At the request of the Fukushima prefectural government, the Ground Self-Defense Force began supplying water to residents.

A landslide occurred along the Joban Expressway in Soma, prompting East Nippon Expressway Co. to close the section between Iwakichuo in the prefecture and Watari in Miyagi Prefecture.

Heavy equipment had been dispatched to remove large boulders and soil blocking all lanes.

East Japan Railway Co. said it is expected to take about 10 days before Tohoku shinkansen bullet train services return to full operation as facilities between Shinshirakawa Station in Fukushima and Furukawa in Miyagi were heavily damaged.

The Akita shinkansen service between Tokyo and Akita, also in Japan's northeast, will be halted through Monday.

The partial suspension of bullet train services prompted airlines to operate special flights connecting cities in the Tohoku region and Tokyo as well as other major cities. 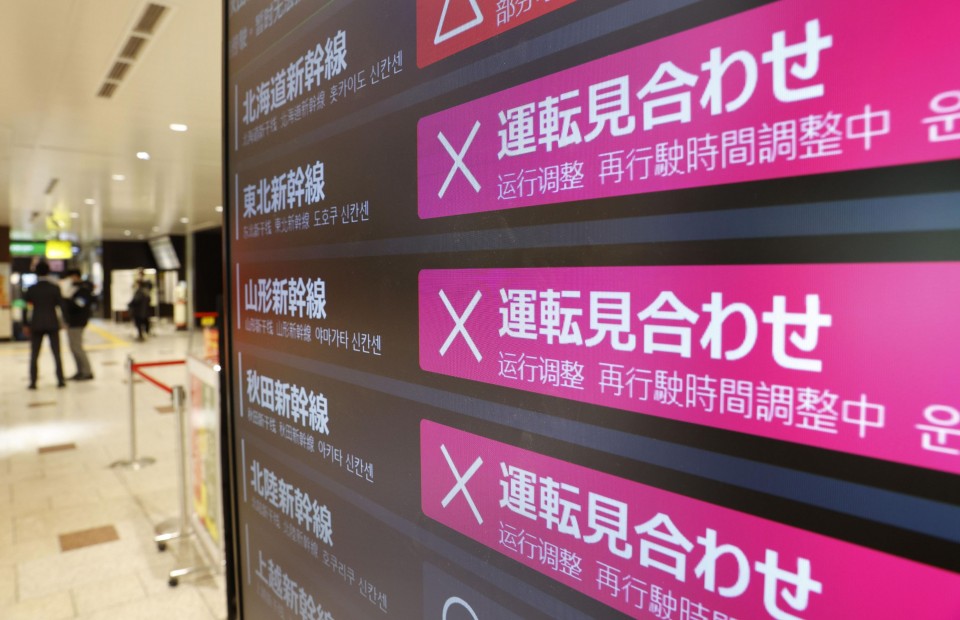