As the Japanese government prepares to roll out novel coronavirus vaccines on Wednesday to fight the pandemic, skepticism in some sections of the public may hamper the effort.

Medical experts say that around 80 percent of the population must have immunity against COVID-19, the respiratory illness caused by the coronavirus, through vaccinations or previous infections to reach herd immunity and start turning the tide against the virus.

People attend a coronavirus vaccination simulation at a university gymnasium in Kawasaki near Tokyo on Jan. 27, 2021. (Kyodo) ==Kyodo

Yet in a Kyodo News survey conducted on Feb. 6-7, only 63.1 percent of people in Japan expressed willingness to get a shot while 27.4 percent said they were unwilling, with women in their 40s and 50s the most unwilling cohort.

Japan's COVID-19 cases are relatively low compared with other countries, standing at around 415,000 in total with over 6,900 deaths.

Nevertheless, it is riding a third wave of infections with an overwhelmed medical system. A second state of emergency over the virus, initially declared in early January for Tokyo and its vicinity, has been extended for another month until March 7, covering 10 prefectures including the capital.

The health ministry said it will prioritize inoculations of frontline health workers starting on Wednesday, and expand the effort over several months to cover general health-care workers, the elderly, and those with pre-existing conditions.

Members of the general public are expected to start receiving their first shots in May or later.

Japan will procure vaccines from Pfizer Inc. and Moderna Inc. of the United States, with an efficacy rate of some 95 percent, as well as from Britain's AstraZeneca Plc, whose rate averages around 70 percent.

Despite their effectiveness, public hesitancy remains.

In a survey held in late January across 15 countries by marketing research firm Ipsos, Japan ranked fourth from bottom in terms of people's willingness to be inoculated at 64 percent, above South Africa, France and Russia, the most skeptical country with only 42 percent wanting to receive a jab.

But Japan fell to second bottom in the 15-country rankings when it came to enthusiasm for inoculation, with only 19 percent "strongly" agreeing to get vaccinations when they become available. Only 26 percent of those willing to be vaccinated wanted to get shots "immediately," suggesting a prevalent wait-and-see attitude. 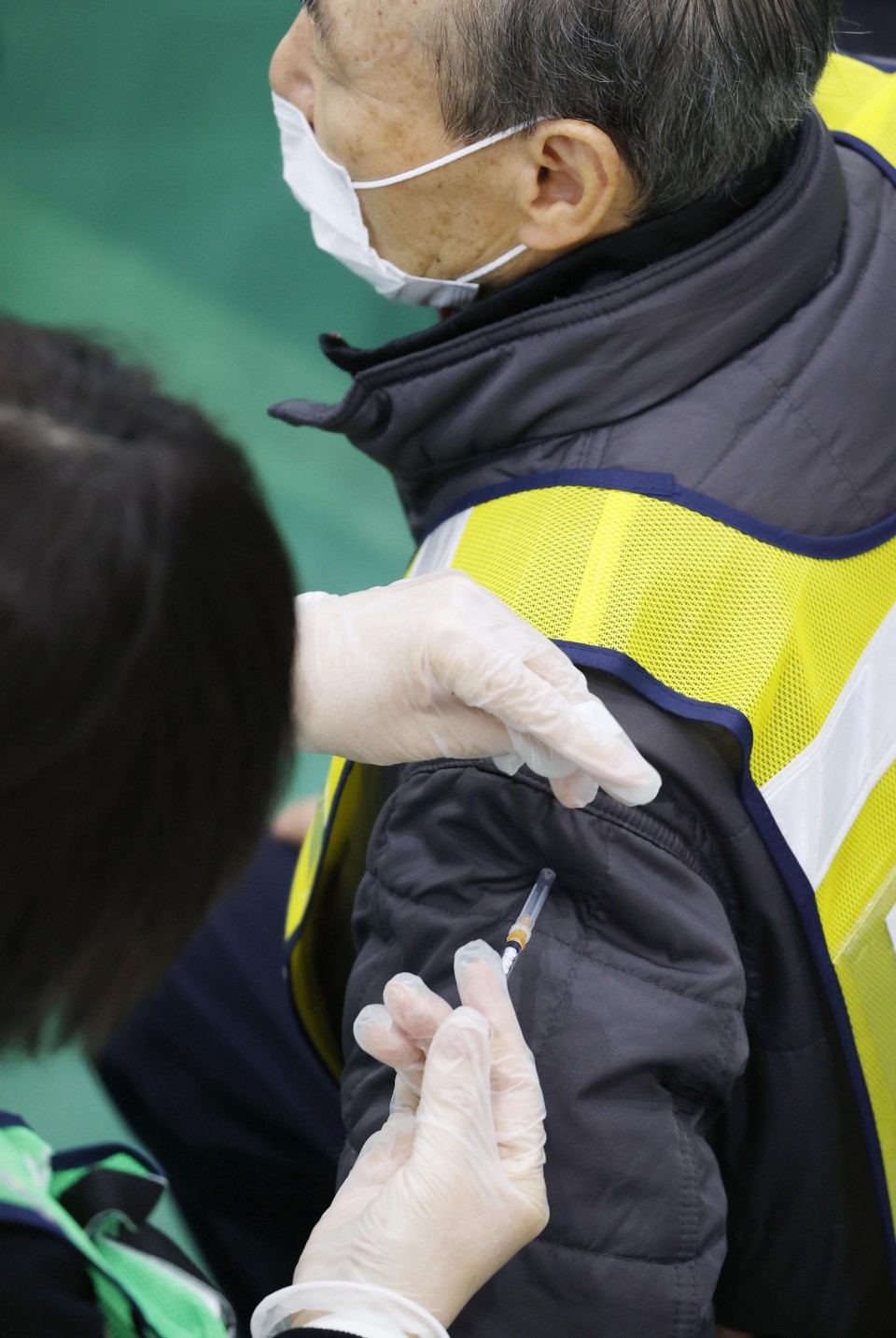 A simulation for group vaccinations against the coronavirus is held at a junior college in Kawasaki near Tokyo in January 2021. Japan is expected to begin coronavirus vaccination in mid-February. (Kyodo) ==Kyodo

At the same time, anti-vaxxer sentiment was low, with only 3 percent of respondents saying they were against vaccines in general, compared with 11 percent in the United States, 10 percent in Italy and 9 percent in South Africa.

In the survey, concern over possible side effects was the biggest reason for the public mistrust in Japan, similar to many other countries but highest among them at 66 percent.

Willingness to take the vaccination differed by age and gender, according to the Kyodo News survey.

In the poll, based on responses from 510 people contacted by fixed-line phone in randomly selected households and 513 mobile phone users across Japan aged 18 or older, the most willing cohort was men aged 60 or above, 72.0 percent of whom said they want to be vaccinated.

In contrast, only 49.5 percent of women in their 40s and 50s were willing, with this cohort also expressing the highest level of unwillingness with 40.9 percent saying they would not get a shot.

While the COVID vaccines have produced side effects in some cases, they are overwhelmingly mild with only a very small number of serious reactions such as allergic responses. Nevertheless, in Japan, past reversals by the government over some vaccines loom large in public memory.

A combined measles, mumps and rubella (MMR) vaccine was withdrawn in 1993 over concern that it caused aseptic meningitis. In 2011, two vaccines against certain types of meningitis and pneumonia were suspended after four children who took them died.

In 2013, the health ministry stopped actively promoting a vaccine against the human papillomavirus which causes cervical cancer, citing a limited number of reported adverse reactions such as lasting pain.

The HPV vaccine is universally recognized as safe, with the World Health Organization setting a global target for the 2020-2030 period of 90 percent of girls being inoculated with the vaccine by age 15.

Experts are worried about misinformation on the COVID-19 vaccines that could fan fears over side effects and deter people from inoculation. Some people feel uneasy over the rapid pace at which the vaccines have been developed, and others at the use by the Pfizer and Moderna vaccines of a new technology -- messenger RNA, or mRNA.

While traditional vaccines put a weakened or inactivated germ into human bodies to trigger an immune response, mRNA vaccines give instructions to cells -- in the case of COVID, to make a harmless "spike protein" that resembles one found in the novel coronavirus.

Kazuya Yamanouchi, 89, professor emeritus at the University of Tokyo's Institute of Medical Science and a virology specialist, said that the rapid speed of development will not deter him from being injected with a COVID vaccine.

The development was quicker than expected but reflects the scientific progress made in the past several decades, he argued. "The only thing that truly works for a virus pandemic is prevention by vaccination," he said.

While admitting that no vaccine has zero risk, Yamanouchi said that social benefit trumps the possibility of side effects. He encouraged people to also consider the safety of friends and families when deciding whether to be vaccinated.