Part of the 84-meter-long Souryu's conning tower was warped and its starboard hydroplane, which helps control depth, was broken, they said. 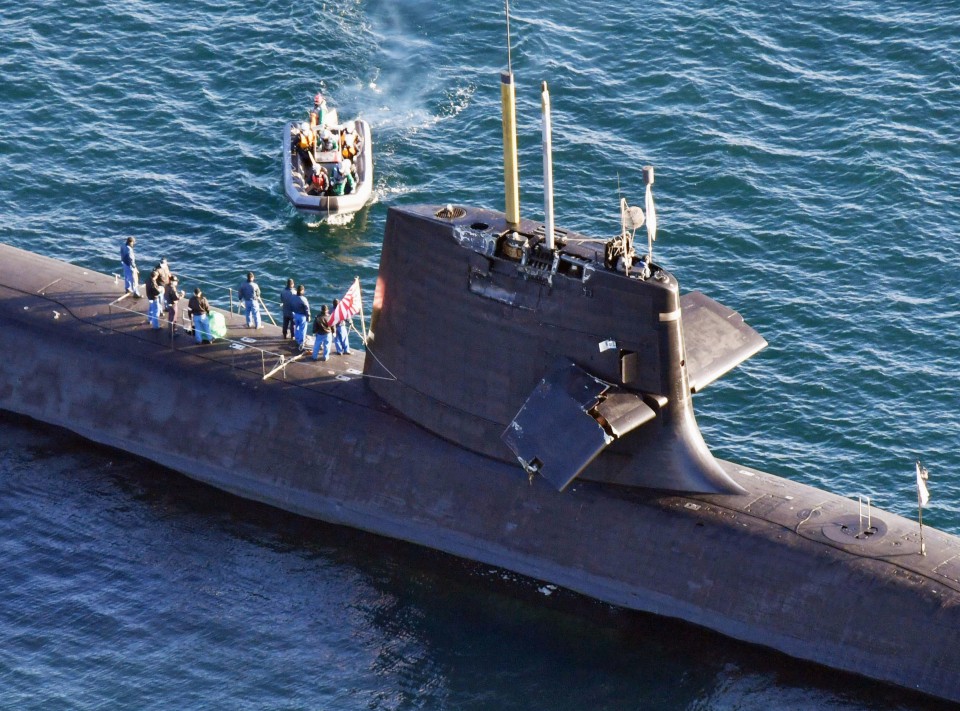 Photo taken from a Kyodo News helicopter shows Japanese Maritime Self-Defense Force submarine Souryu off Kochi port in the western Japan main island of Shikoku on Feb. 9, 2021, following its collision with a commercial vessel in the Pacific Ocean off Shikoku the previous day. A fin (front) on the starboard side of the submarine is seen bent over. (Kyodo) ==Kyodo

The collision may have been caused by human error including failure to sufficiently check the surroundings with sonar as the submarine surfaced, Defense Ministry sources said Tuesday. There was no reported trouble with the sonar and periscope prior to the incident.

The submarine's communications equipment was also damaged in the collision, resulting in the incident not being reported for more than three hours after it occurred at around 10:55 a.m. off Cape Ashizuri in Kochi Prefecture.

Regarding the delayed accident report, top government spokesman Katsunobu Kato said at a press conference Tuesday the ministry should take measures to prevent such a communication delay from happening again.

MSDF Chief of Staff Adm. Hiroshi Yamamura apologized for the incident in a press conference and said there was no excuse for such a communication problem.

Kishi said Monday the Souryu was unable to avoid hitting the commercial vessel despite the ship being visible in the submarine's periscope as it surfaced.

The 5th Regional Coast Guard Headquarter started an investigation into the cause of the collision Tuesday morning at Kochi Port, where the submarine, which was engaged in routine training, arrived late Monday.

Three crew members on the submarine were slightly injured.

The commercial ship, believed to be the Hong Kong-flagged bulk carrier Ocean Artemis, had around 20 Chinese crew members aboard, according to coast guard sources.

The vessel is scheduled to arrive at Kobe Port in the western Japan prefecture of Hyogo, the regional coast guard headquarters said Tuesday. Coast guard divers will check the condition of the vessel's hull.

The ministry and coast guard are checking whether the submarine crew adhered to surfacing procedures, according to the ministry sources.

Sonar is used to detect other vessels in the vicinity, but it is difficult to detect ships located behind a submarine.

To ensure safety, a submarine, when surfacing, must change its position and gradually rise near the sea surface while making sure there is no "dead zone." Once close to the surface, the submarine extends its periscope.

According to the sources, the Souryu could not detect the vessel with its sonar, only noticing the vessel when it extended its periscope. By then, the submarine could not shift gear and ended up scraping the bottom of the vessel, the sources said.

Tidal currents may have also made it hard to capture the sonar signal from the vessel, they added.

The Souryu is a diesel-electric submarine with a standard displacement of 2,950 tons and a crew of about 65. It entered service in 2009 as the first of its class, and belongs to the fifth submarine fleet based in Kure, Hiroshima Prefecture.