Japan's governors urged the central government on Saturday to present its coronavirus vaccine rollout plan soon as little information has been provided so far on how many vaccines will be available and when they will be delivered.

While the National Governors' Association pledged to double its efforts to bring the pandemic under control, participating prefectural chiefs demanded the government provide information on its rollout preparations in a speedy fashion to support municipalities in making detailed vaccination plans. 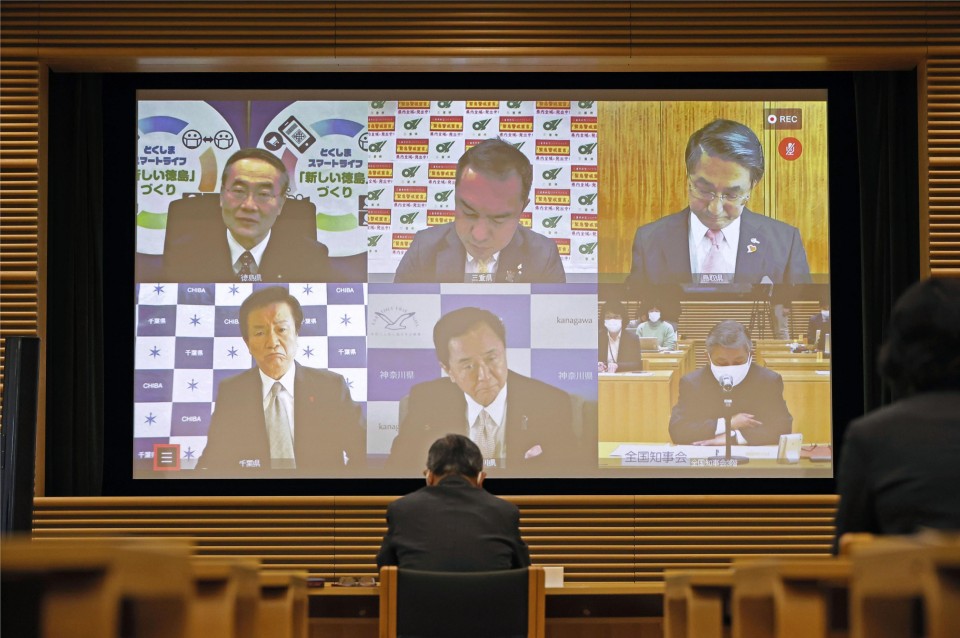 The National Governors' Association holds an online meeting on Feb. 6, 2021. The association called on the Japanese government to come up with realistic vaccination plans for its citizens amid the coronavirus pandemic. (Kyodo) ==Kyodo

The association decided to form a group of liaison officials to improve communication with the health ministry about inoculations, which are expected to start with health care workers in mid-February.

Many local governments are frustrated at the lack of information from the central government on vaccine delivery, struggling to make plans for staffing and vaccination sites, a recent nationwide survey by Kyodo News found.

"We can't secure vaccination sites or doctors without knowing exactly when and how long we need them," said an official of the Sapporo city government.

One mayor in the Tokyo metropolitan area said, "It's like we are being rushed to make preparations with our hands tied."

The Ministry of Health, Labor and Welfare said in late January that vaccinations for those aged 65 and over would begin in late March, but Taro Kono, administrative reform minister overseeing the vaccination program, said a few days later they would not start before April.

Many governors also called for further financial support for eateries that have struggled during the pandemic, regardless of whether the facility is located in the prefectures under the state of emergency, as well as for the transportation and tourism industries that have taken a hit.

Prime Minister Yoshihide Suga declared a second state of emergency across a number of prefectures in early January to Feb. 7 following a rapid surge in infections. The emergency was extended to March 7, as hospitals remain under pressure despite the fall in virus cases.

Under the state of emergency, people are urged to refrain from unnecessary outings, while restaurants and bars are being asked to close early.

In Tokyo on Saturday, 21 people infected with the coronavirus died, the metropolitan government said, bringing the capital's COVID-19 death toll to 1,017.