Airlines and bus operators decided Monday to increase services as the high-speed railway connection between the Tokyo region and northeastern Japan remained disrupted in the wake of a powerful earthquake that struck the country two days ago, leaving more than 150 people injured.

Many homes in the hardest-hit prefectures of Miyagi and Fukushima were still without water and businesses already battered by the novel coronavirus pandemic are struggling to resume operations. 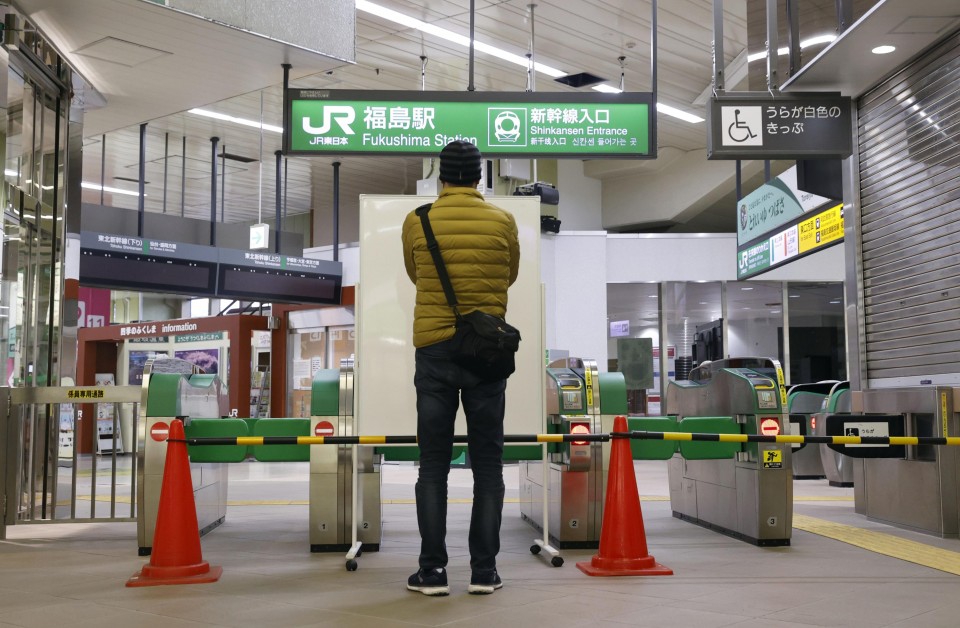 A shinkansen bullet train ticket gate is closed at JR Fukushima Station on Feb. 15, 2021, as services were halted following a magnitude 7.3 earthquake that hit northeastern Japan on Feb. 13. (Kyodo) ==Kyodo

Japan Airlines Co. and All Nippon Airways Co. said they will increase the number of flights between the Tohoku region and Tokyo's Haneda airport and Itami airport in the Osaka area. They will also use larger airplanes for some flights.

JR Bus Tohoku Co. based in Sendai, Miyagi Prefecture, which was heavily jolted by the earthquake late Saturday, will add more than 20 services connecting the Tokyo metropolitan area with Fukushima and Sendai stations during the daytime.

"We may discuss a further increase of bus services if the situation requires," said an official at the company's Morioka branch in Iwate Prefecture. JR Bus Tohoku has been flooded with reservations and inquiries.

The magnitude 7.3 temblor, registering upper 6 on Japan's seismic intensity scale of 7 in parts of Fukushima and Miyagi prefectures, damaged electricity poles and bridges on the Tohoku Shinkansen Line. Bullet train operations have been halted between Nasushiobara and Morioka stations in Tochigi and Iwate prefectures, respectively, since Sunday.

East Japan Railway Co. said it will in addition partially suspend bullet train services on Monday between Morioka and Shin-Hakodate-Hokuto, Hokkaido, and run only one or two trains per hour between Tokyo and Nasushiobara stations.

The operator, known as JR East, will resume services between Ichinoseki and Morioka stations in Iwate Prefecture on Tuesday, while it is expected to take about 10 days until Tohoku shinkansen bullet train services return to full operation.

The operator on Monday is also reducing Akita shinkansen services between Akita and Morioka stations, as well as those of the Yamagata shinkansen between Fukushima and Shinjo stations. 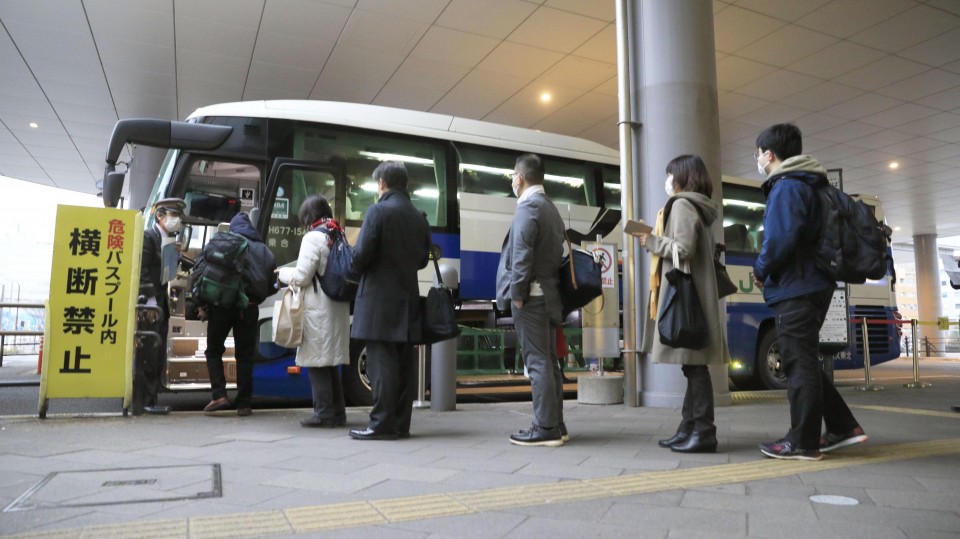 Passengers line up at a bus stop in Sendai on Feb. 15, 2021, to board a long-distance bus as shinkansen bullet train services were halted following a magnitude 7.3 earthquake that hit northeastern Japan on Feb. 13. (Kyodo) ==Kyodo

People continued to clean up the mess left by the quake and those in areas affected by water cuts lined up at supply points.

The quake damaged about 1,400 houses in Fukushima, according to the prefectural government. In Miyagi, 186 houses were partially destroyed, the internal affairs ministry said.

About 900 homes in the town of Yamamoto in Miyagi remained without water. The Ground Self-Defense Force has started providing water in the neighboring Fukushima Prefecture town of Shinchi, where all households were left without water.

The quake also affected businesses in Fukushima preparing to resume operations with the lifting on Sunday of a local government request to shorten business hours, which was aimed at containing the spread of the coronavirus.

"I had just received a call from a regular customer awaiting our reopening," said Yosuke Mashiko, 37, who was about to end the temporary closure of his bar in Koriyama from Monday evening. "I know all of this is no one's fault, but I am overwhelmed."

Kirin Holdings Co. said it had stopped operation of a beer production plant in Sendai due to quake damage to the facility and inventory, and does not expect the plant to restart until Wednesday at the earliest.

The weather agency warned that heavy rain is forecast in Fukushima Prefecture from Monday evening and called on local authorities in the prefecture to be aware of potential landslides.

The Japan Meteorological Agency said there could be heavy snow along the Sea of Japan coast from Tuesday to Thursday.

The powerful earthquake injured nearly 160 people, according to the ministry. The temblor also caused damage to school buildings in Fukushima and Miyagi prefectures, prompting a total of 82 schools to close on Monday.

A total of 324 cases of damage to school buildings had been discovered in four prefectures, including 121 in Miyagi and 192 in Fukushima, including cracked walls and floors, shattered windows, and burst water pipes, according to the education ministry.

Although no deaths were attributed to the temblor that struck at 11:07 p.m. Saturday, it caused power and water outages across a wide area. It came just weeks before the 10th anniversary of the magnitude-9.0 quake and tsunami that devastated northeastern Japan in March 2011, leaving more than 15,000 people dead and triggering the Fukushima nuclear crisis.