The debate about whether the Tokyo Olympics should go ahead this year has led some organizers to question their involvement, but for 3x3 basketball tournament coordinator Susumu Ebihara, it has clarified his mission to move forward and shine a spotlight on the sport.

Like many staff members of the Tokyo Olympic and Paralympic Organizing Committee, Ebihara put his career on hold to help put the games together and show the world what Tokyo is all about. 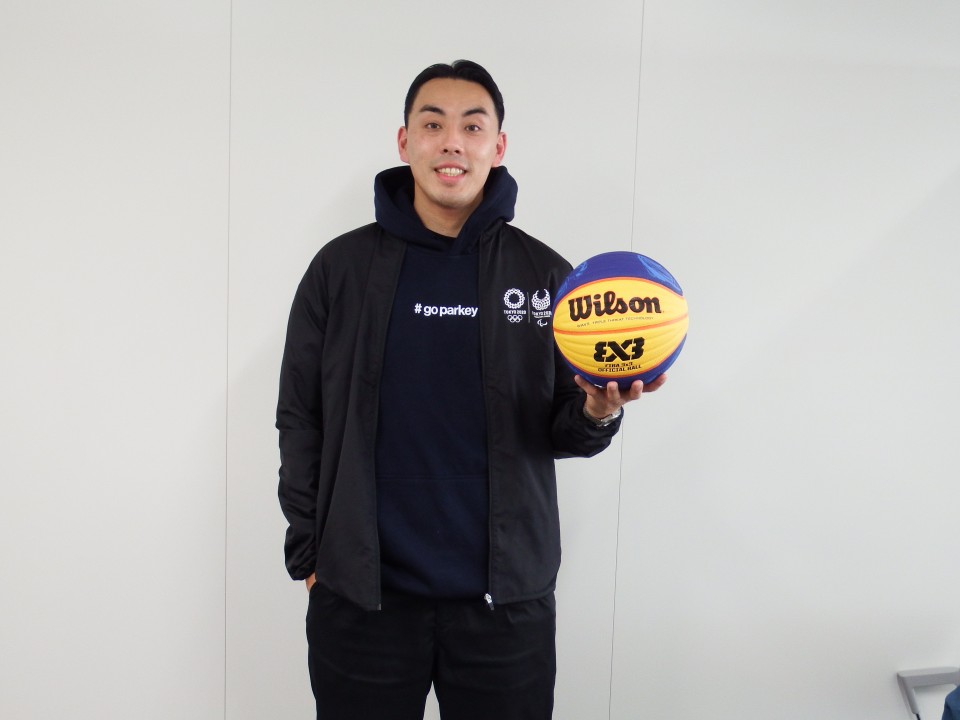 Susumu Ebihara, who is organizing the Tokyo Olympic 3x3 basketball tournament, poses with an official ball in Tokyo on Feb. 4, 2021. (Kyodo)

But the cost of the one-year postponement due to the coronavirus pandemic, and a new surge in infections across Japan, has pushed public opinion against holding the games.

"You wake up in the morning and turn on the TV...but it's not happy news about the games," Ebihara told Kyodo News recently. "This situation challenged my beliefs and made me question myself, 'Why are you still doing this job?' Everybody is forced to do this."

That introspection made Ebihara begin to view the job less as a personal career and more as a public responsibility.

"It made my beliefs in this even more concrete. They became polished through this process," he said.

Early in 2019, Ebihara quit his banking job after he was asked to join the organizing committee. But what he initially saw as a chance to turn his passion for street basketball into a job in the sports business has taken on a new meaning, with a refocused mission.

"I started playing basketball when I was 10 years old on the playground, that connected me to the world," he said.

"My personal mission is to share this with non-sports people because we can do more for basketball, focus on public courts, where kids start dreaming."

"Our slogan is 'from the streets to the Olympics.' We have the Olympics, and that's the biggest dream, but we also have this starting point. (In street basketball) you don't have to be in a club or "bukatsu" -- official school club activities. If you have parks and playgrounds with hoops, it's everybody's place."

International Olympic Committee President Thomas Bach recently proclaimed that no country but Japan could have reorganized a postponed Olympics to take place during a pandemic. But Ebihara's hope is that street basketball can provide an alternative model to the top-down organization that permeates sports in Japan.

"It's basic infrastructure. But we cannot just tell the government, 'We need more hoops. Can you build them?' he said. "It's difficult, but if people see this dream, see this sport, people will pay more attention to where it started. (The Olympics) is the dream, but it came from playgrounds and parks."

"If kids watch on TV and get excited, it would be great if they could just take a ball and go to the local park and play. Those kids don't need to become Olympic athletes, but like it did with me, basketball in the park can lead to other things, they could develop a love of playing sports that would stay with them into adulthood."

So while one goal is bringing his sport to the attention of the Japanese public, Ebihara is aware that being too visible could put street basketball's grassroots culture and dynamism on a collision course with Japan's need to organize everything.

"I'm also worried that this sport might get too organized. I'm happy that it is spreading, but I'm worried that when Japanese people think something is a sport they think 'physical education.' I don't want this dynamic culture to be too regulated," he said.

Speaking as an organizer, Ebihara said the pandemic has taught him and his colleagues a lot about how important it is to be dynamic and look beyond their areas of responsibility.

"It's not only about delivering games (anymore)," Ebihara said. "You have so many challenges now beyond the court."

"I think Japanese need to care more about things beyond the scope of their own responsibility. None of us are epidemiologists, but we (organizers) are all reading, all learning. Nobody is forcing us to do it, but the sense of responsibility is pushing us to learn things we never expected before we joined this committee."

"In this committee, you have to go beyond boundaries, especially regarding COVID-19, because a virus doesn't think about boundaries."