Relief and concerns among businesses, citizens and even governors were mixed in the six prefectures that Prime Minister Yoshihide Suga said Friday would have their COVID-19 state of emergency lifted at the end of the month.

While some welcomed the move in the hopes it would help revive the economy, others expressed concerns that lifting the declaration too soon in Aichi, Gifu, Osaka, Kyoto, Hyogo and Fukuoka could lead to a resurgence of infections in those areas. 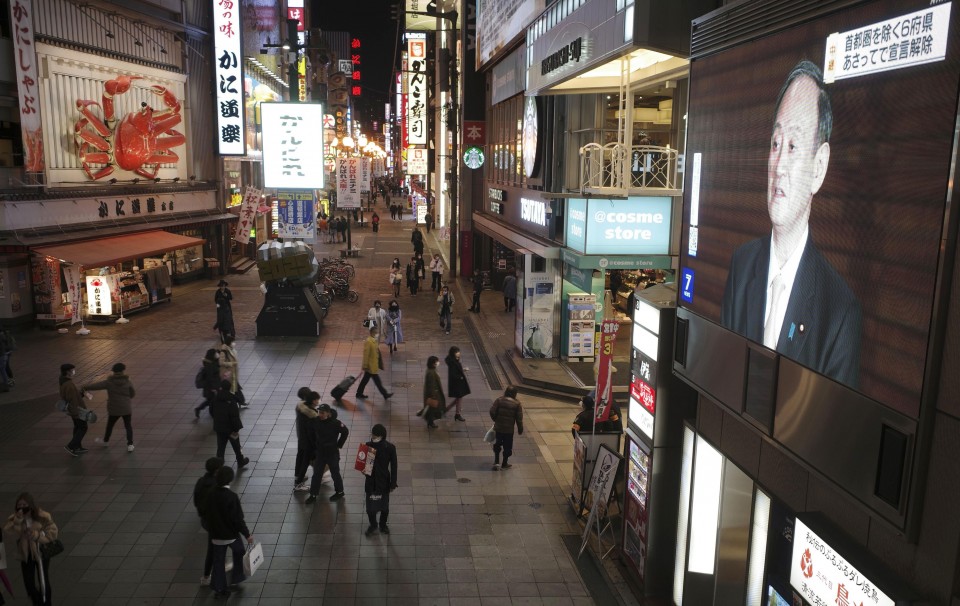 A street TV (R) in Osaka shows on Feb. 26, 2021 Japanese Prime Minister Yoshihide Suga announcing the government's decision to lift its coronavirus state of emergency for six prefectures, including Osaka, at the end of the month, but the Tokyo metropolitan area will have to wait for further signs of improvement. (Kyodo) ==Kyodo

Aichi Gov. Hideaki Omura, who on Monday asked the central government to lift the declaration, said he would gradually ease restrictions in the prefecture if the situation continues to improve.

Sources close to the matter said Omura had sought to request that the central government lift the declaration even earlier around Feb. 13 but abandoned the plan after he was unable to win the support of medical advisers.

However, Gifu Gov. Hajime Furuta has taken a more cautious stance. With a hospital in the prefecture currently in the midst of a large cluster outbreak, he said, "We need to remain on guard. A (large) cluster infection can occur at any hospital."

A woman in her 40s working in a clinic in the city of Gifu likewise expressed concern, saying, "I hope there won't be another spike in cases."

Although Furuta had previously indicated the state of emergency should be lifted in his prefecture at the same time as Aichi, he did not make any direct requests for the central government to do so.

Following the lifting of the emergency declaration, the Nagoya branch of department store chain Matsuzakaya and various restaurant chains plan to extend their closing times by an hour to 9 p.m.

Meanwhile, Meitetsu Department Store Co. said it plans to keep the shortened hours in place for the time being as it does not expect to see customers returning all at once.

A 17-year-old high school student who was eating out with a friend in downtown Nagoya on Friday said she went out because she felt the declaration would be lifted soon. "It has been rough staying in all this time, and everyone around me has also relaxed," she said.

In western Japan, Osaka Prefecture is set to reduce the scope of its requests to shorten business hours to within Osaka city, and extend the requested closing time by one hour to 9 p.m.

A restaurant owner in his 40s in the city's major entertainment district of Minami welcomed the move, saying, "One hour is a big plus for restaurants."

Keisuke Ishikawa, the 51-year-old vice president of the local shopping district association in Arashiyama, a popular tourist spot in Kyoto, also welcomed the lifting of the declaration but said it was questionable whether it would result in an increase in visitors to the area.

Of the 10 prefectures currently under the state of emergency, the six prefectures will be removed from the list a week earlier than the scheduled end date of March 7 as infections have declined and the strain on hospitals has eased.

Tokyo and neighboring Kanagawa, Chiba and Saitama have seen some improvement in their situations but are to remain under the state of emergency for the time being.