Opposition parties demanded Thursday the resignation of an elite female bureaucrat who was treated to a luxury dinner by the eldest son of Prime Minister Yoshihide Suga, but the government rejected the call.

Cabinet Public Relations Secretary Makiko Yamada, 60, was found to have been treated to a meal in 2019 worth 74,000 yen ($700) by Seigo Suga and other officials of Tohokushinsha Film Corp., which runs a satellite broadcasting business. 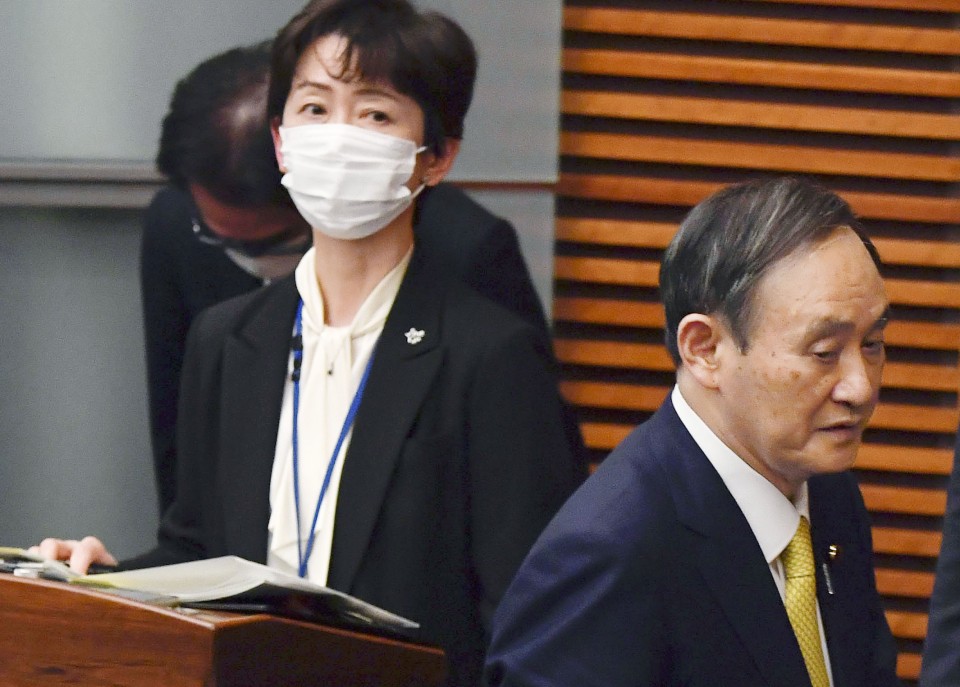 As she was then a vice minister for policy coordination at the communications ministry and Seigo Suga represented a stakeholder, the dinner violated the ethics code.

"As a matter of course, she should resign," Japanese Communist Party leader Kazuo Shii said at a press conference.

Kenta Izumi, policy chief of the main opposition Constitutional Democratic Party of Japan, also said, "Being treated to a dinner worth about 70,000 yen is beyond common sense. The government (of Suga) pampers officials of its own."

Yamada apologized in parliament but said she will not resign over the scandal. The government has also scrambled to keep her as a symbol of women's empowerment.

Internal Affairs and Communications Minister Ryota Takeda rejected the opposition's demand for Yamada to step down, saying in parliament he will "make efforts to regain the lost trust."

Prime Minister Suga suggested Wednesday that the government would not dismiss her, telling reporters she has sincerely reflected on what she has done. "I have high hopes for her as a female public relations official," he said.

Chief Cabinet Secretary Katsunobu Kato said Yamada will voluntarily return 705,000 yen, or 60 percent of her monthly salary, over the 2019 dinner.

"I apologize for damaging public trust in civil servants due to the violation (of the ethics code) while I was at the communications ministry," Yamada told the House of Representatives' Budget Committee, when she was summoned as a witness.

But she also said, "I want to improve myself as much as possible by reflecting on it while I continue to serve in my post."

Yamada became the first woman to assume her current position, which sees her manage the prime minister's press conferences, in September last year, when the elder Suga replaced Shinzo Abe as prime minister.

Abe had also made her Japan's first female secretary for a prime minister in 2013 as his government sought to promote gender equality as a pillar of its growth strategy.

Yamada claimed to be a "woman who never declines invitations to drinking parties" in a past video message addressed to young people.

She said in the video those who decline a request to join such a session "will never be invited again," adding, "I hope all of you will try hard to increase your chances of meeting people."

Other senior bureaucrats of the communications ministry who were similarly treated to expensive meals by the Tohokushinsha officials were reprimanded Wednesday for ethics code violations.

But Yamada escaped a reprimand as she has already retired from the ministry and the ethics code does not cover an individual granted special status to serve in a government post.

The government has been trying to contain the scandal, partly because it is seeking to avoid the exit of a woman from a government post following recent sexist comments by the former president of the Tokyo Olympics organizing committee that highlighted Japan's backwardness in promoting gender equality.

The remarks by Yoshiro Mori, a former prime minister, on Feb. 3 that participation by women in board meetings made them "drag on" triggered a wave of criticism at home and abroad. The 83-year-old later stepped down over the sexism row.

The government set a goal in 2003 of filling around 30 percent of leadership positions in the country with women by 2020, but it pushed back the date to "as soon as possible within the 2020s" after failing to meet the target.